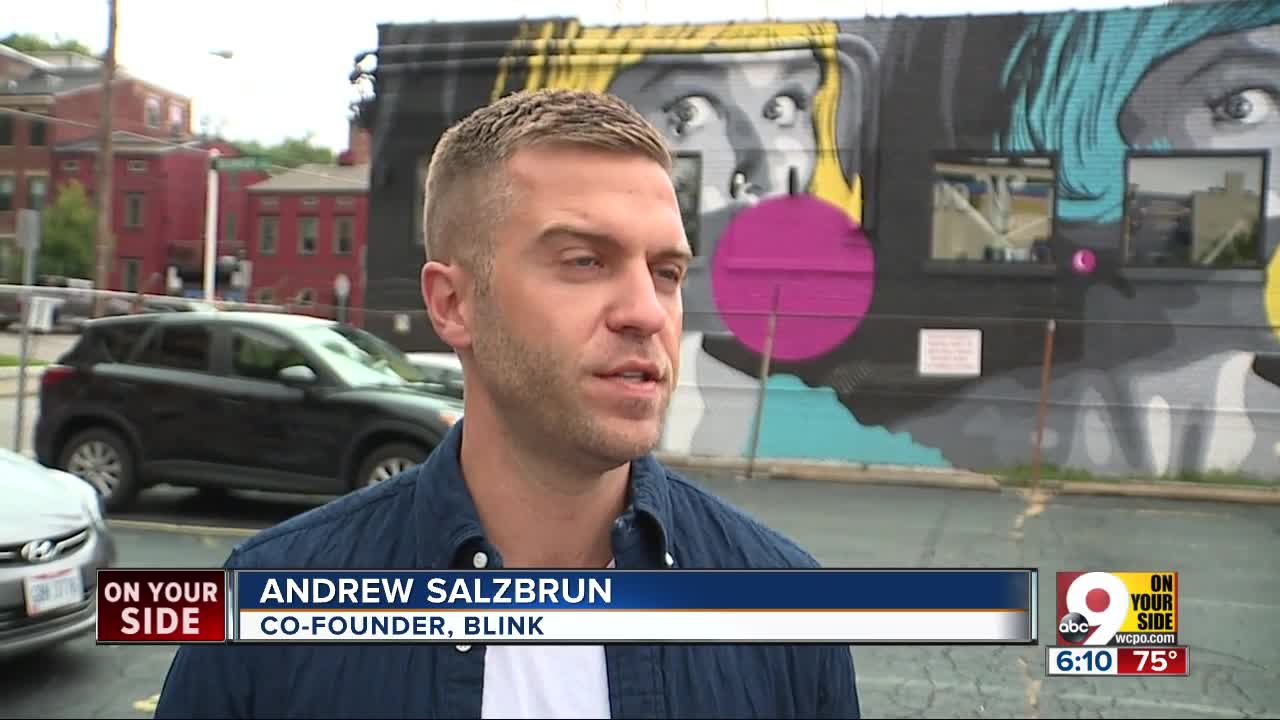 CINCINNATI — The organizers behind BLINK have set no small task for themselves: How do you top the inaugural 2017 light festival that spanned 20 blocks and drew approximately one million people to the Queen City over four days?

The group answered that question Tuesday afternoon by sharing its list of muralists and projection mapping artists currently designing the artwork to be featured when BLINK returns for its second year.

Below are details highlighting four of the larger art installations that will debut when the free art and light festival washes over the Queen City from Oct. 10-13.

Perhaps the most anticipated of those installations discussed on Tuesday was “Rumble, the Roebling Sings.”

Brave Berlin, the locally-based creative marketing firm overseeing BLINK’s light projections describe “Rumble” as an eye-popping art installation that will bring the John A. Roebling Suspension Bridge to life through the use of colored interactive light and sound.

“Rumble” will act as a connector between The Banks and Covington, according to Brave Berlin.

In July, BLINK organizers announced plans to add a fifth “zone” that encompassed Madison Avenue from the Ohio River south to Pike Street in the Northern Kentucky city. (BLINK’s original four zones that included the Findlay Market area of Over-the-Rhine, Over-the-Rhine south of Liberty Street, the Central Business District and The Banks will return again this year.)

Brave Berlin is working with Masary Studios, a Boston-based creative firm that specializes in light and sound, along with Vincent Lighting Systems located in Erlanger to bring the iconic bridge to life. Together, the three companies will incorporate colored, interactive light and synchronized audio projected onto the Roebling to enhance its architectural details.

“Rumble’s” soundscape will feature audio samples collected from the actual structure and an original score to celebrate the Roebling, which is also known as “The Singing Bridge.”

“Fraction” is the second show-stopping installation Brave Berlin discussed on Tuesday. Brave Berlin is partnering with Fifth Third Bank's Innovation Center to create a light projection that will incorporate elements of Fountain Square.

According to Brave Berlin, “Fraction” will feature the Genius of Water and play on the principle of “light bending as it passes between different materials like air and water.” The installation will project light throughout Fountain Square and utilize interactive elements to invite people to play, work and draw light “from one another as they explore parallels between light and water.”

“Tempo” is described as an “interactive interface with projected animation content.” Brave Berlin is again handling the light projection while partnering with L4 Studios, a board game company.

Brave Berlin will also work with New York-based artist Saya Woolfalk to bring an original Woolfalk mural to life with a combination of projection mapping and live performances throughout BLINK.

In her website bio, Woolfalk is described as an artist, “who uses science fiction and fantasy to re-imagine the world in multiple dimensions.”

Woolfalk's mural will be one of 15 new mural installations, which are being coordinated by Agar.

Both BLINK merchandise and VIP packages are currently for sale on the light festival's website.

For a more details about BLINK artists, installations and other features visit blinkcincinnati.com.