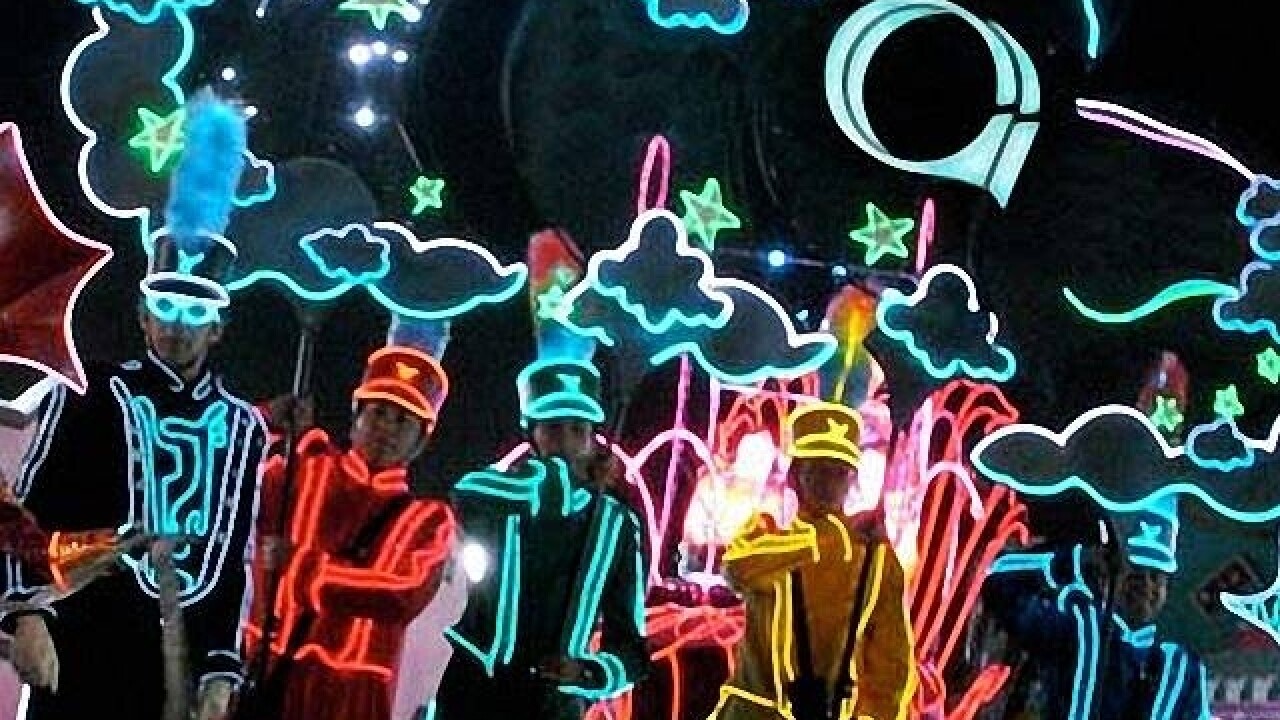 Copyright 2017 Scripps Media, Inc. All rights reserved. This material may not be published, broadcast, rewritten, or redistributed.
PROVIDED
<p>An illustration of costumes that organizers hope to see Thursday in the BLINK Future City Spectacular Light Parade. The parade will kick off the four day BLINK Cincinnati light and art festival.</p>

CINCINNATI – The Queen City is about to get lit.

At 7 p.m. Thursday an estimated 2,500 people decked out in LED and electroluminescent (EL) tape lighting will march through Over-the-Rhine as part of the BLINK Future City Spectacular Light Parade.

Legendary funk bassist Bootsy Collins and his wife, Patti, will lead the parade as grand marshals. The parade, which will start on Vine Street near Findlay Market and end at Washington Park, kicks off the four-day, 20-block BLINK Cincinnati light and art festival.

"I just know how much our city embraces parades," said Pam Kravetz, the parade's creative director through nonprofit ArtWorks. "We are really good at them, and we love them."

Kravetz described the light parade as a community affair. She and organizers recruited about 1,000 local students and 60 civic groups to participate. ArtWorks started reaching out to schools and organizations in May.

"For me, the excitement is seeing people, from little kids to grown adults to established artists, all coming together to create this whimsical, ridiculous bright light for the city," Kravetz said.

The only requirement for people to take part was that they dress themselves, or a float, with battery-powered lighting, she said.

Through ArtWorks, BLINK donated more than 900 LED lanterns for students to carry in the parade, said Josh Stout, BLINK program manager for ArtWorks.

"We are going to hand out 10,000 glow sticks to community members along the route as well," Stout said.

ArtWorks apprentices designed two light floats. Students from the University of Cincinnati's College of Design, Architecture, Art and Planning, and Cincinnati Museum Center staff designed parade displays, too. Each float is either people-powered or moved by nothing bigger than small golf carts, Stout said.

BLINK organizers gave out 10,000 batteries to power the LED strands and 200 to 300 feet of EL lighting tape.  Art on the Streets Cincinnat i  is using its donated lighting to decorate bicycles that its members will ride in the parade.

"We have done this kind of bike ride in the past," said organizer Margy Waller. "It's called a bright ride. It is very popular. BLINK asked us to bring it back because it's such an obvious good fit."

"I'm guessing we'll have 100 or over 150 riders," she said. "A lot of people will do their own thing by decorating their own bikes or decorate their own bodies."

Once the parade ends, Art on the Streets members plan to continue their ride along the BLINK route, doubling as a mobile BLINK art installation.

"It's this crazy excitement," Kravetz said. "The excitement, even people trying stuff and it not working and then retrying, has been super charming."

BLINK runs from 7 p.m.-midnight Thursday through Sunday. The festival is free, with the exception of daytime walk-through tours of the Architects of Air luminarium exhibit at Washington Park.