Behind the bar: How one Queen City Exchange bartender is capitalizing on his experience 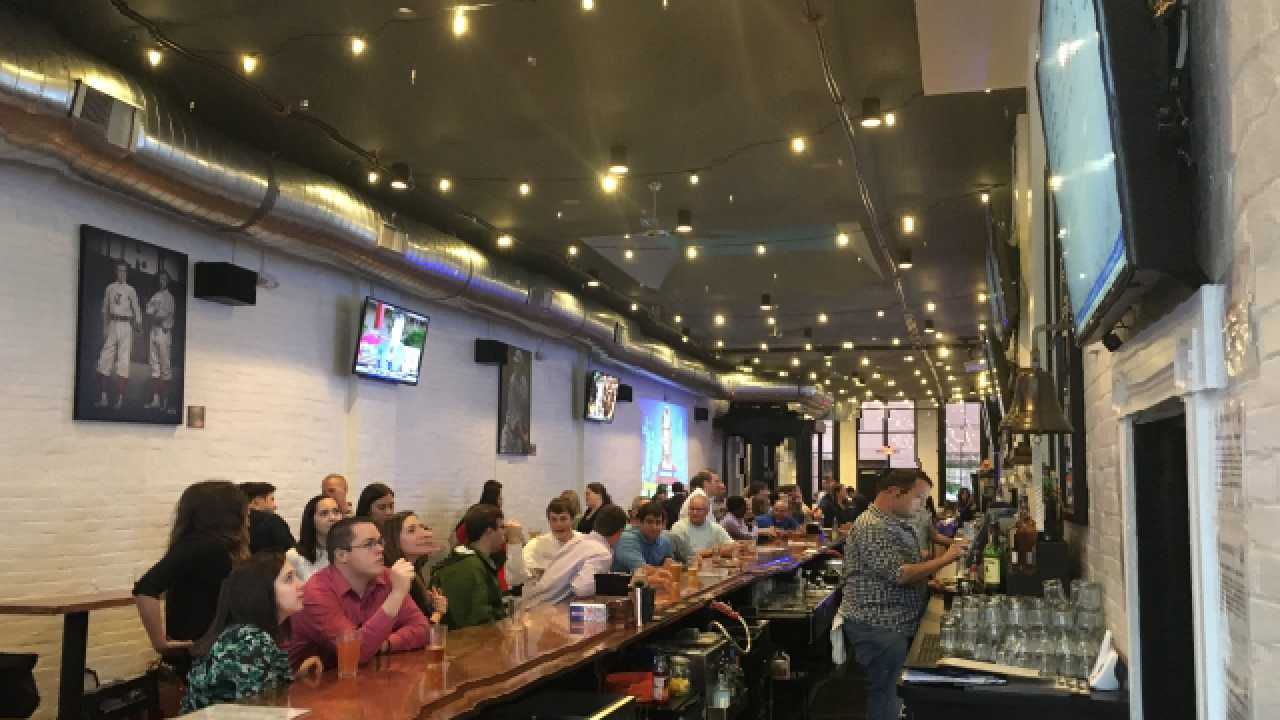 CINCINNATI -- Whether he's creating a cocktail or helping someone choose one of 41 draft beers, Nick Squeri lets flavor profiles guide him as he tends bar at Queen City Exchange.

"With the knowledge you gain, you can help tailor it to what they like," he said. "You can use that to find something on the menu that's to their liking. When you get that right, that also feels good."

The stock market-themed Queen City Exchange opened its doors two years ago this month. The bar, the first of its kind in Cincinnati, serves up craft beers at prices that fluctuate in accordance with customer demand. Drinks start off each day with happy hour prices around $5, then increase or decrease in price based on popularity.

Craft beers are grouped together based on style to encourage patrons to try different brews. When a customer buys an IPA, the cost of that beer increases and another IPA drops in price. Beers cost between $3.50 to $9 throughout the night, but most fall within the $4 to $7 range, said Patrick Daffin, managing partner for Queen City Exchange. The bar also serves wine and cocktails.

Classic cocktails are some of Squeri's favorites to make, he said, but he also enjoys the trial and error of crafting specialty cocktails.

"A lot of times I'm tasked with making a cocktail or a shot that is to resemble a certain flavor, to pay homage to a certain idea," he said. "Creating from scratch with that kind of aim is always fun ... coming up with the names is fun, too."

Squeri has worked as a manager and bartender at Queen City Exchange since it opened, but his culinary training fostered his enthusiasm for flavor profiles years ago.

The Delhi Township native started out in the industry in 2011 with a culinary apprenticeship at the Wentworth by the Sea resort in New Hampshire.

He returned to Cincinnati in 2012 and began working as a cook at A Tavola. He transitioned from a kitchen role to serving, then bartending when the restaurant opened its Madeira location in 2014. In addition to A Tavola and Queen City Exchange, patrons may recognize Squeri from his days serving and bartending at Incline Public House.

Bartending allows him to blend the creativity he enjoyed while working in the kitchen with the customer interaction of a serving job.

"The interacting with customers -- that is probably my favorite part of the job," Squeri said.

The feeling seems to be mutual for customers and coworkers.

"Nick is one of the most personable and well-liked bartenders I've ever interacted with," Daffin said.

With that interaction comes a level of observation that requires a bit of adjustment for someone used to creating behind a kitchen door.

"There is a level of feeling the pressure when you're preparing drinks with an audience, whether directly or indirectly," Squeri said.

"The pressure of eyes isn't there in kitchen," he added. "You either become adjusted to it or you thrive under it."

In his case, the pressure has become an incentive to do good work. He welcomes patrons' questions and acknowledges that conversation is one of his strengths as a bartender.

"My strong suit would have to be anticipating customers' needs before they need to ask and finding ways to connect with them," he said.

From making drink recommendations to remedying a complaint of an overly-foamy beer, Squeri enjoys satisfying customers.

"He really cares about the client and their experience and that they enjoy themselves here," Daffin said.

That's something that comes in handy for a bar that's "off the beaten path," compared to city's riverfront and Over-the-Rhine. It also reflects the character of Queen City Exchange -- a bar that hearkens back to the community gathering spaces of old taverns while simultaneously catering to modern revelers.