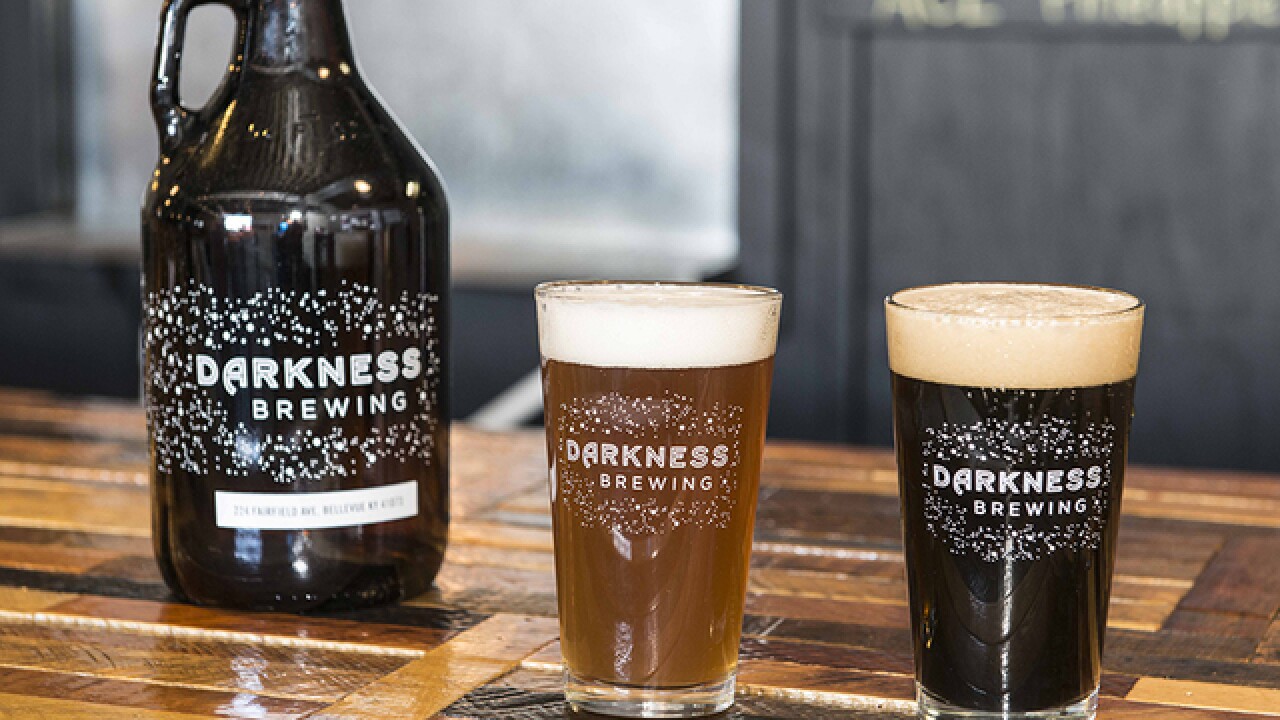 Copyright 2018 Scripps Media, Inc. All rights reserved. This material may not be published, broadcast, rewritten, or redistributed.
Darkness Brewing celebrated its grand opening at 224 Fairfield Ave. in Bellevue on July 23, 2016.The Drakness Brewing Co. growler, Kentucky Common Ale and Man on the Moo which is a Milk Stout.

FRANKFORT, Ky. (AP) — When someone wants to purchase a keg of beer from craft brewer Adam Watson, he has to turn them away because Kentucky law limits how much he can sell to a customer.

That would change if a bill winding through the General Assembly becomes law.

The Kentucky House voted 68-15 Friday to pass a measure that would raise the limit on per-customer sales by microbrewers at their establishments. The measure would allow daily, on-premise sales of up to the equivalent of two kegs to each customer. The current limit equals a case of 12-ounce beers (2.25 gallons or 8.5 liters).

The scaled-back measure now headed to the Senate reflected compromises made after the original legislation ran into resistance from some wholesale and retail interests. The original bill would have allowed unlimited, on-premise sales per customer.

Watson, president of the Kentucky Guild of Brewers, said the compromise version will help Kentucky’s craft brewers. The micro-brewing trend generally started in the state’s largest urban areas, but is now spreading to other communities across Kentucky.

Watson, co-owner of Against the Grain, a Louisville-based craft brewery, said the current limit causes more headaches for his brewery, which packages its beer in 16-ounce (about a half-liter) cans.

“So I can’t sell somebody a case,” he said in an interview after the House vote. “I have to pull eight cans out, and then I can sell it to them. And if they sit at the bar and have a pint while they wait, I have to pull that much more out of what they’re buying as well.

“And if somebody wants to put a keg on for their wedding or their party over the weekend, I can’t sell them that,” he added. “So I am having to turn away legitimate transactions.”

Thirty-two states put no limits on how much microbreweries can sell to each customer at their establishments, said Republican Rep. Adam Koenig, the bill’s lead sponsor.

During the House debate, some opponents of the measure cited the tragic consequences caused by drunken driving. Rep. David Hale, R-Wellington, said he voted against the bill in memory of a close friend’s 23-year-old daughter who was killed, the victim of a drunken driver.

Noting the new per-customer limit proposed in the bill, Hale said: “Thirty-one gallons (117 liters) could have a very detrimental effect on someone.”