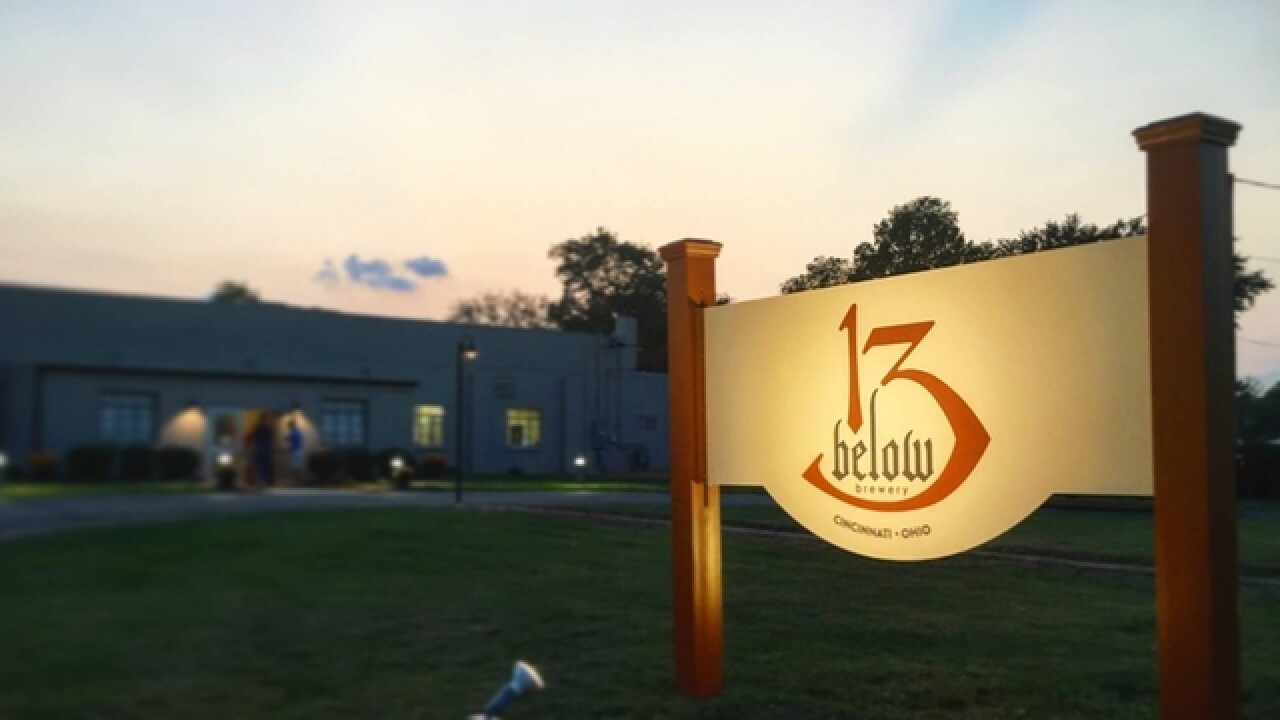 Copyright 2017 Scripps Media, Inc. All rights reserved. This material may not be published, broadcast, rewritten, or redistributed.
<p>Photo courtesy 13 Below.</p>

CINCINNATI – Residents of Sayler Park and craft beer lovers are welcome to celebrate the grand opening of 13 Below Brewery this weekend.

13 Below's celebration will kick off with plenty of beers on tap at 4 p.m. Friday, Sept. 29 and continue with food trucks and family fun through Sunday. The brewery is located inside the former Mariner's Inn at 7391 Forbes Road, according to co-owner Doug Menkedick. Forbes Road is just south of U.S. Route 50 along the river's edge.

“It’s been quite a family experience,” Menkedick said of readying the 10-barrel brewhouse and taproom.

Menkedick's brewery partners include wife Anne, Dick and Lyn Busche, Ray and Monique Busche, and Bob and Cindy Luebbering. The Busches and Luebberings live on the West Side. The Menkedicks live in Indiana, but Anne Menkedick grew up in the city's West Side.

Menkedick said the four couples have a combined 50 years of home brewing experience. They began discussing opening their own brewery a few years ago before purchasing the former Mariner’s Inn in December 2015.

“It’s been quite an effort, and we’ve put many hours into remodeling the place,” Doug Menkedick said.

He said the group drew inspiration for 13 Below's name from the brewery's proximity to the Ohio River.

“As we were thinking about what we’d name this thing, we did a lot of research of the area,” Menkedick said. “We started thinking of the river itself. Rivers have different mile markers. As a riverboat captain you would say you are above or below a well-known point or town. Our brewery is located 13 miles ‘below’ (Downtown) Cincinnati.”

The brewery seats about 200 people between its taproom and outdoor patio area. The taproom includes a U-shaped bar with 13 taps, Menkedick said. The brewery is launching with traditional-type beers including a West Coast IPA, Belgian white ale, blonde, porter, amber, stout and Scotch ale.

The brewery is dedicating its remaining taps to a rotating lineup of seasonal beers and "brewmaster specials" that don't fit into a particular style, Menkedick said. There is also a quick-service section in the taproom for growler fill-ups.

“We hope to produce about 850 barrels of beer in our first year,” he added.

The brewery, located near Cabana on the River, Mariner’s Landing Marina and Hidden Cove Marina, is a welcome part of a wave of new businesses for Sayler Park, said Community Council president Jackie Litchfield Apted.

“We are so excited,” Apted said. “We have such a strong German history in this neighborhood. It’s nice to bring back part of something so German into Sayler Park. Everyone loves craft breweries.”

“We have a lot of other things planned for Sayler Park as well,” Apted said. “People are bringing ideas."

Menkedick said he appreciated the council’s support of 13 Below’s opening in the neighborhood.

“We’re really excited about this market,” he said. “Sayler Park is a really neat community. We all know how important family is. If you go to this brewery, you’ll see generations hanging out together.”