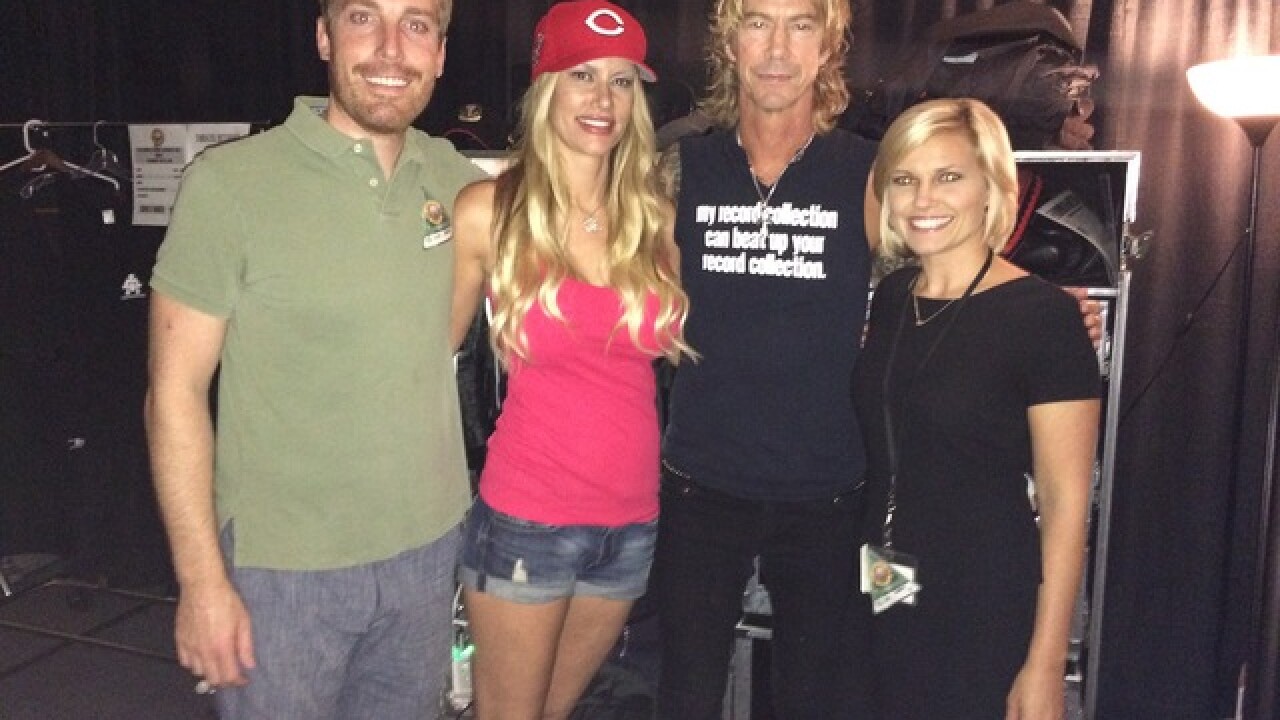 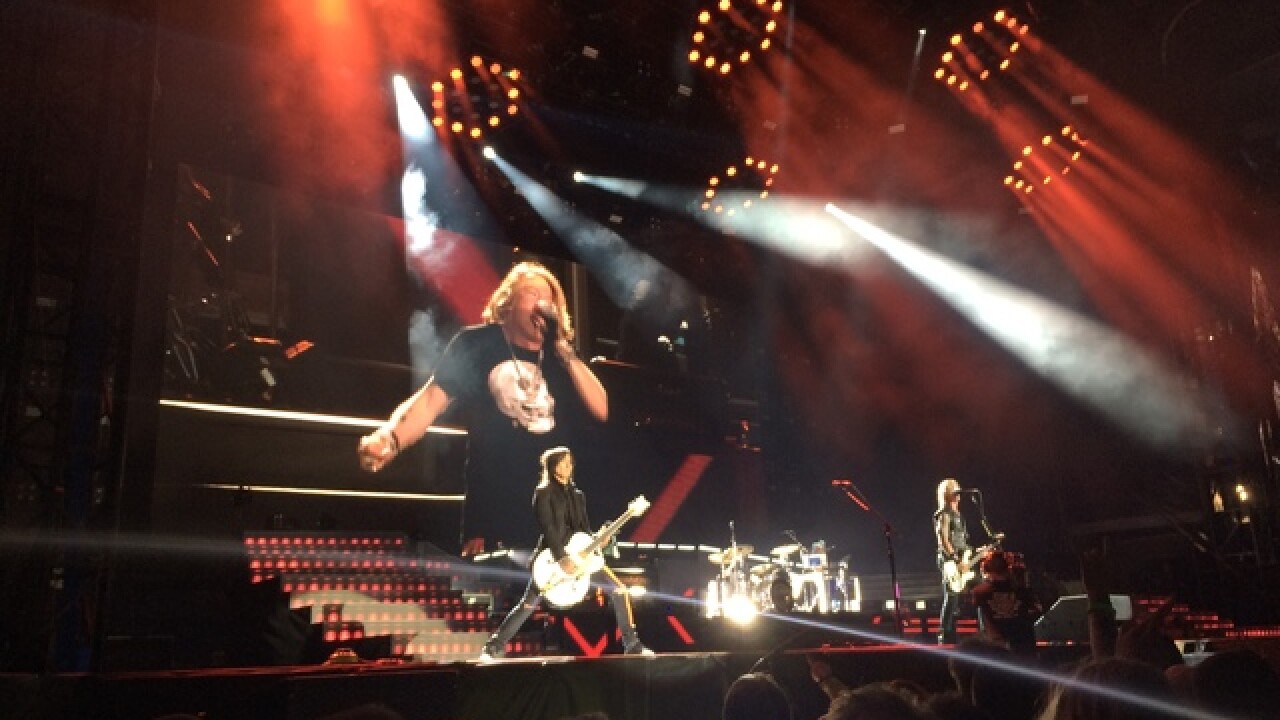 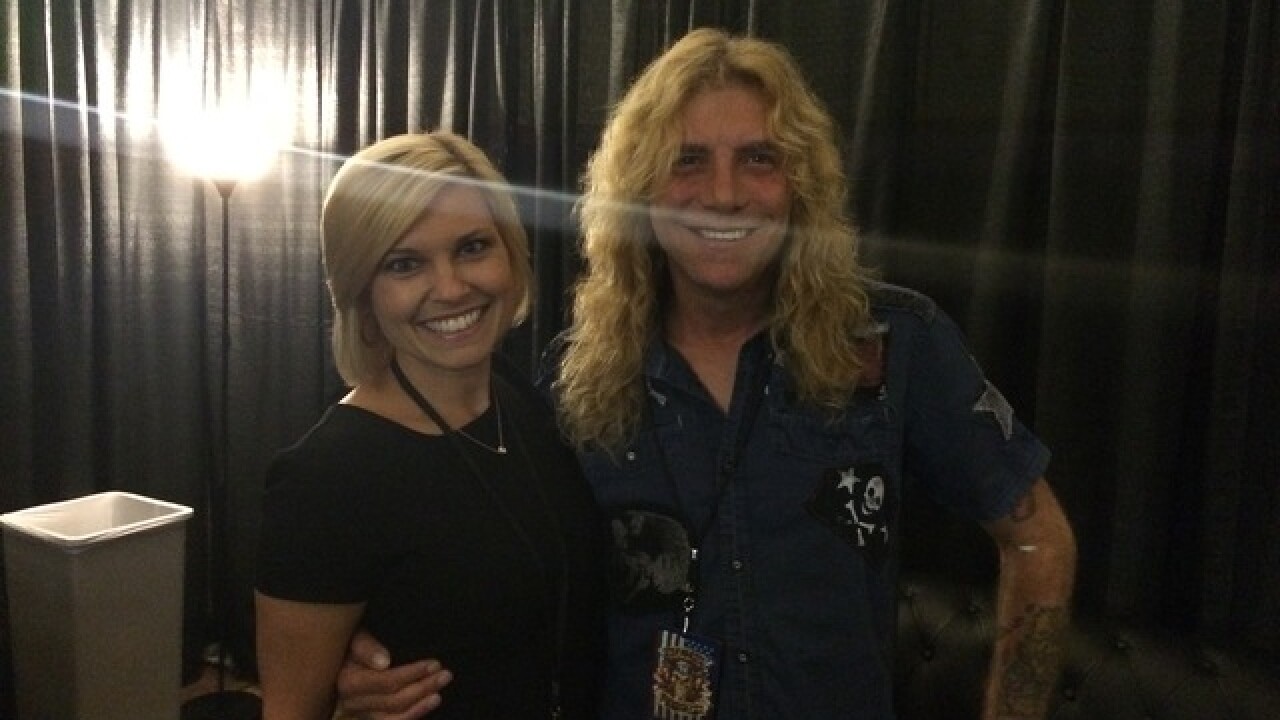 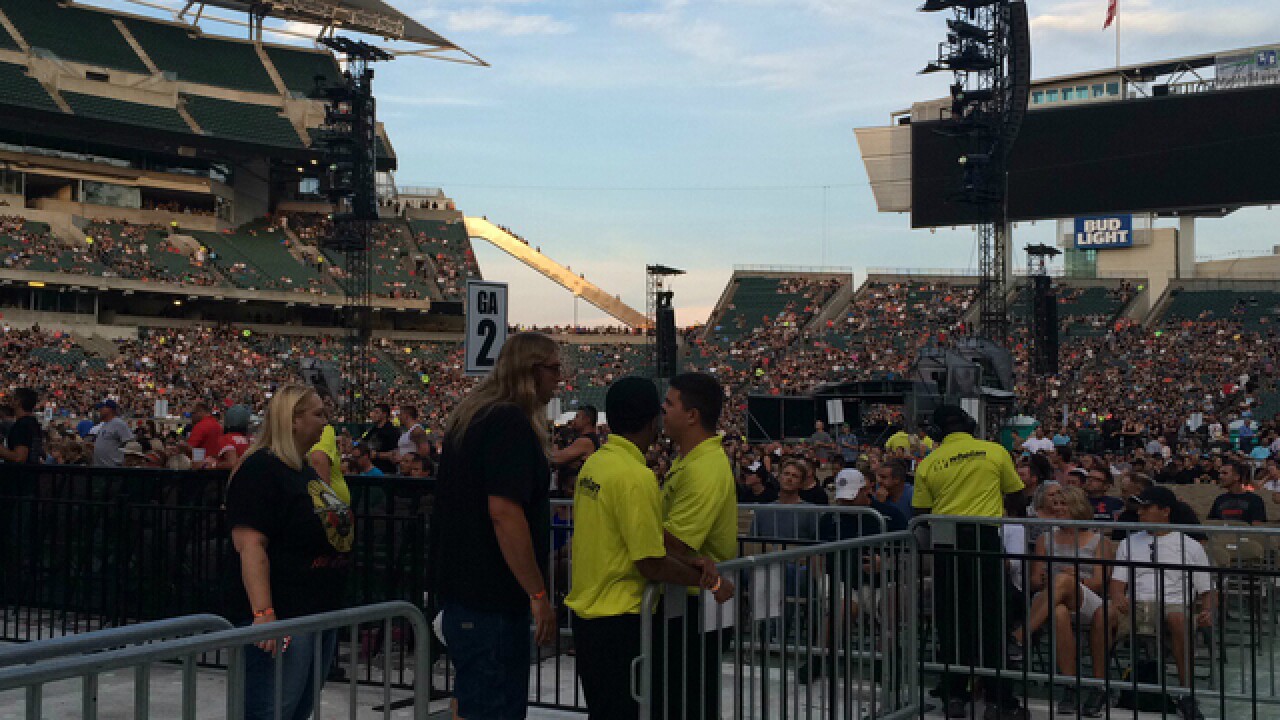 Susan Holmes-McKagan, wife of GNR bassist Duff McKagan, is an Ohio native and HUGE Cincinnati Reds fan. (Notice her hat.) And much like the rest of us locals, some of her fondest childhood memories include going to Reds games with her dad.

2. They're rock stars, but they're human.

Steven Adler, GNR's original drummer, was invited to surprise the fans and reunite with the band for the first time in years. My husband and I were sitting on a couch in the green room when he walked in half dressed and full of pre-show jitters. He was looking for a safety pin. Miraculously someone had one, (note to self: always carry a safety pin) and he turned to me and asked me to pin his pants. "Huh? Like.. to your underwear?" I mindlessly asked. "No, bunch the fabric together and tighten the pants," my husband laughed. Got it. Success. Did that just happen? Yes. And the point? Adler may be a rock star, but he still has ill-fitting pants and needs a little help every now and then. He's human...

Plus, I wanted to tell you that story.

3. Business kept the band together (even when they were apart).

"So, how did the band get back together? Who made the call?" I boldly asked Duff McKagan. "Hmm.. I haven't rehearsed these answers. I haven't done any interviews about this yet," he joked. McKagan went on to say that even when GNR members were working on other projects, they stayed in touch thanks to their shared interest in merchandise and music royalties. It wasn't much money he says, but enough to keep them in contact. He called the GNR reunion a mutual decision. I'll buy it!

Tens of thousands of screaming fans packed Paul Brown Stadium for the concert. The best part? No one was screaming at each other. For one night, people weren't hashing out political views or heckling one another over opposing sports teams. The sold-out crowd was happy to be there and excited to hear the music.

5. People age, but their music doesn't.

Thirty years later, you might not recognize the band members if you walked by them on the streets. But if you were there last night, you'd recognize every song. They didn't miss a beat. I was so impressed with their vocal and physical stamina. All of the musicians worked the stage and managed to keep energy levels at full throttle for the show's entirety.

"Welcome to the Jungle," baby! Pun intended. The crowd went wild when the band's fourth song began. I looked around to take it all in and noticed that there's really not a bad seat in the house. It was my first concert at PBS and it certainly won't be my last.

I'm sure there are some great perks to being married to a rock star… endless free concerts, an all access pass behind the scenes, your hubby's fat paycheck.. etc. But Susan Holmes-McKagan was successful on her own before meeting her husband. When she finished high school, the self-proclaimed black sheep of the family didn't attend the college where her father worked as a professor. She moved to Paris to model -- and she stayed for seven years. Years later when she married Duff and got pregnant, she decided to put her fashion sense to work. Holmes-McKagan runs a successful bathing suit line, writes for Huffington Post, and currently is writing a book due out next year. Who's the rock star now?

8. Try not to watch the show through your cell phone.

We're all guilty of it: something cool happens and we immediately reach for our cell phones to capture a photo or video. We want to remember the moment so badly that we focus more on capturing it than actually living it. I recorded a few videos (for you, of course), and then I made a point to put my phone away for a few songs and let myself enjoy the music.

And the world is lucky the band is back together.