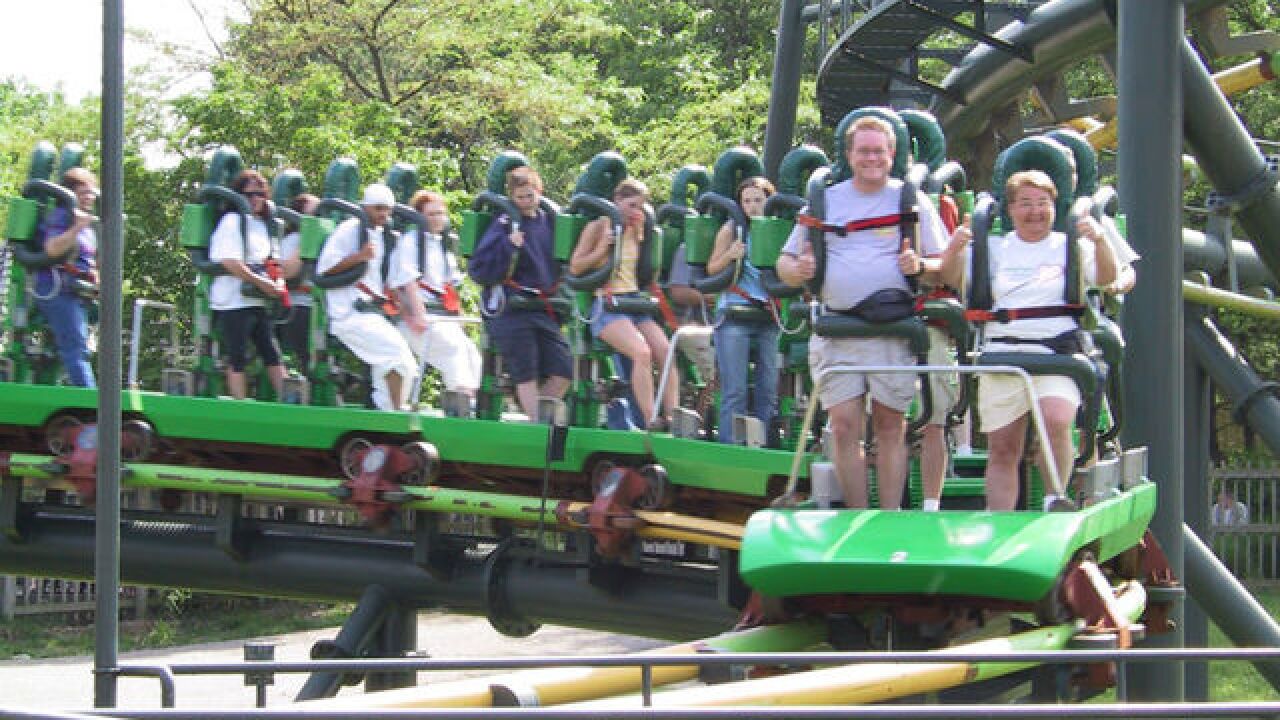 For those who grew up going to Kings Island every summer, returning each year is a chance to relive memories. Rides like the Racer, the Monster and Shake, Rattle and Roll have been there since the start. They’re rides kids rode with their parents and now ride with their own kids.

But many rides have disappeared over the years. Some we miss, some not so much.

Maybe hardcore coaster lovers enjoyed Son of Beast, but most of us just felt like we were getting pummeled with a pillowcase full of batteries when we rode it. Then there was Tomb Raider, a flipping platform that could have passed for a torture device in medieval times. Also, Kenton’s Cove Keelboat Canal – a taller yet far more boring version of the log flume.

But there are several that we wish were in some sort of Old-School Land to enjoy one more glorious ride. Here are nine Kings Island rides that we miss.

Most people probably knew this ride simply as “the barrels” or “drunken barrels.” It was one of the original rides at Kings Island and lasted until 1989.

A variation of Disney World’s teacups, the barrels themselves spun manually and were mounted on spinning circles. The ride’s whole platform also tilted as it rotated. Depending on how sadistic your barrel mates were, it could be quite a nauseating experience.

The barrels had alcoholic drink names stamped on the side – gin, ale, whiskey, etc. It was appropriate given the drunken state it could make riders feel. It’s hard to know how well the ride would go over today, but spinning is a time-honored tradition at amusement parks and this ride was good at it.

It was possibly the simplest ride ever at Kings Island but was fun because of that simplicity. Another original attraction, the slide went by the name Flying Carpet Slide before being moved from the Coney Island section to Hanna-Barbera Land in 1986.

The original version had 12 lanes and three hills -- one hill was lopped off when the ride moved.

The walk up the steps was more daunting than the ride itself. And you’d slide in a burlap sack that looked like it had been used to haul potatoes in a war zone.

The ride was a good one for parents to share with kids or for teenagers to race. Maybe it wouldn’t fit in today’s world of mega-coasters and extreme thrills, but the slide was a lot of fun.

Some will argue that the original Enchanted Voyage boat ride should get this spot, but it was too trippy to have ever lasted until today. While it did celebrate Saturday morning Hanna-Barbera cartoons very nicely, it also had weird, giant talking snails (which you can still see at the Fairfield Jungle Jim’s) and a clown chomping down at your boat as you exited. That’s just terrifying.

In 1984, the It’s a Small World-like attraction was converted into a Smurf-themed boat ride at the height of Smurfmania. Admittedly, having the horribly catchy Smurf theme playing on a loop could drive you insane. But experiencing firsthand the Smurfs’ ability to elude Gargamel’s quest to kill them was pretty Smurfing satisfying. And it was air-conditioned, so it was an excellent refuge from hot summer days.

In 1991 the boats were taken out and the ride became Phantom Theater. It has been two other haunted house rides since. None has been better than the Smurf ride.

Kings Island’s first foray into the motion ride genre came in the heart of its Paramount days in 1994. Many rides had movie themes and this one latched onto Tom Cruise’s NASCAR flick.

There’s no doubt this ride was barf-inducing, but between the giant screen, booming sound and seats that rumbled and tilted with the angle of the track, it was a very immersive experience.

Maybe its best effect was the camera angle from the bumper of the stock car. It gave an amazing perspective and showed why “rubbin’ is racing” in a way one would only get from driving in a NASCAR race themselves.

It was replaced a few years later by James Bond’s License to Thrill, which was cool but not as cool as running a few laps from the perspective of the great Cole Trickle.

This one is definitely a blast from the past. Opened in 1973, this was a bobsledding simulation that simply went around in circles. It was nothing fancy, but it went pretty fast for just going in a loop.

Along with rides like the aforementioned Der Spinning Barrels, Bayern Kurve did a nice job of taking on the Oktoberfest theme in that part of the park. It had a Bavarian Alps motif that made you want to yodel. The ride closed in the early '80s.

Maybe the best part was that each bobsled was marked as a country. Team USA was the first car, meaning we brought home the gold every time. Take that Switzerland, Germany or whatever other country is actually good at bobsledding. USA! USA! USA!

Skylab opened at Kings Island in 1986 and can best be described as a Ferris wheel on steroids. The space-themed spinning wheel started in the ground and a hydraulic arm lifted it 90 degrees once the spinning reached a certain speed.

It was definitely not a ride for the centrifugal force-challenged. The cars swung out parallel to the ground when it started spinning, making them perpendicular to the ground once the arm was fully extended.

Skylab closed in 1997.  It was a ride that probably wasn’t for everyone, but it was certainly a lot of fun for those who could withstand a lot of G-force.

That probably doesn’t sound terribly fun, but when you’re a kid and you get to put Mom and Dad in the passenger seats while you drive, that’s a pretty amazing feeling. With a rail on the road to keep the cars from veering into fiery crashes, there was no risk involved (other than the butthead behind you ramming you with their slightly faster car).

Both opening with the park in 1972, Sunshine Turnpike had a sports car theme and took you through Hanna-Barbera Land. Les Taxis might have been slightly cooler because the old-timey cars acted not only as a ride but dropped you off at a different station than where you started. Sure, it probably took less time to walk between point A and point B, but what’s the fun in that?

Sunshine Turnpike disappeared in 1994 in favor of Nickelodeon Splat City, and the taxis were removed 10 years later.

The Racer remains a beloved staple of Kings Island. In the early '90s it got a very cool twist when one of the trains was turned around, pitting one going forward and one running backward in the continual races for coaster speed superiority.

But in 2008 they were both turned forward again in some Cedar Fair uniformity effort. Now there can’t be anyone out there who really cares that one park’s twin coaster has a backward train and others don’t, can there?

Because of that bureaucratic baloney, we’re cheated out of a better experience where there were dueling thrills and the ability to stare riders of the opposing train in the eye before crushing their spirits.

While it might not be considered cutting-edge in today’s world of insane coasters, King Cobra was mind-blowing when it arrived in 1984. It was the first stand-up roller coaster with a loop in the world.

Along with sending standing riders upside down, it also included plenty of sharp banks and a helix that turned the train on its side. It was definitely a top-of-the-line coaster for its time and would certainly still draw riders today.

Sure, having the attendant adjust the restraints and bicycle-like seat often felt like an unwanted prostate exam, but the anticipation of going down the first hill was worth it.

According to website KIExtreme.com, King Cobra was dismantled after its manufacturer closed its U.S. offices. Replacement parts became too hard to obtain and the Cobra was done in 2001.