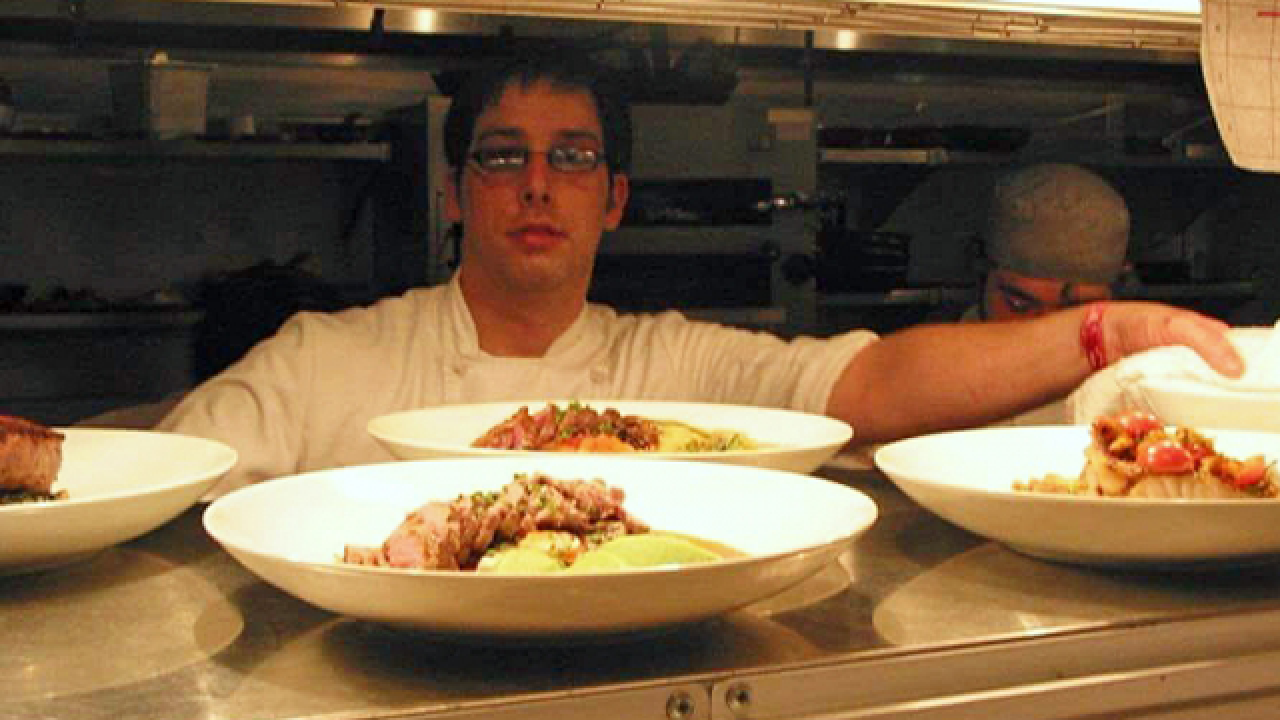 Copyright 2018 Scripps Media, Inc. All rights reserved. This material may not be published, broadcast, rewritten, or redistributed.
<p>Jared Whalen at Pigalls circa 2004. Picture provided by Scott McDonald</p>

I first met Jared Whalen about 12 years ago. He started gabbing like he’d known me for years, and it didn’t take long for him to tell me how he’d once broken his arm but stayed on to work an entire shift. "No you didn’t," I thought.

“Yes, he did,” Jean-Robert de Cavel* confirmed. Whalen had somehow managed to "grin and bear it" and got the job done. This is the kind of war story legends are made from.

For many of today’s budding cooks and chefs, Whalen was in fact a legend. Affectionately nicknamed J-Rod, Chef Jared and even “chef dude,” Whalen suffered heart failure and passed away on August 20. He was 44.

His passing has left his industry family reeling and heartbroken. The groundswell of grief-stricken voices is overwhelming—many seeking answers and many more wanting the world to know the person they just lost.

Whalen was a friend, brother, mentor, life of the party, chief consoler, warrior, prankster and very simply, an all-around badass chef whose passion, compassion and creativity knew no bounds.

“What I most admire about Jared was that he never met a stranger…the way he included everyone into everything about him” Christopher Ropp* said. “He was one of the most incredible and caring people I have ever come to know.”

Which explains why he instantly treated me like his friend 12 years ago. We didn’t work together -- I was a culinary instructor and Whalen was the chef-de-cuisine at Pho Paris -- but we shot the breeze like old pals.

Many under his charge considered him their friend, someone they could talk to well into the wee hours of the morning, or even jam with to The Grateful Dead while working to sous vide a ton of eggs late into the night.

When Summer Genetti* first learned of her mother’s cancer diagnosis, Whalen was there to listen. As she burst into tears, she said “he pulled me into his arms and told me that it was going to be OK.”

Whalen was one of those people who did not – could not – stop creating. He once told me he would run over to the restaurant kitchen in the dead of night to try out new dishes that popped in his head. He was obsessed with his craft.

“His dedication to his craft was unparalleled,” said Roy Silcott*. “We used to sit at the bar and just draw new plates and create them on the back of napkins. The next day we made the dishes.”

Cristian Pietoso* hasn’t forgotten how Whalen stayed at the restaurant until 1 am to clarify stock for the next day. “He was dedicated to his profession,” Pietoso said. “He was a true chef.”

Whalen’s creativity defied norms and he encouraged – even dared – his cooks to do the same.  “When I suggested a white chocolate wasabi mousse with raspberry gelée, his response was, ‘That sounds dope, do it,’” Genetti recounted.

Whalen taught those around him simply by doing what he loved. “He was a big-hearted lug that carefully cultivated a "bad-boy" image, but those of us that knew Jared knew that he was kind and generous with a gigantic soft-spot,” Andrew Vogel* said. ”He was always, always willing to teach new folks.”

Amy Hunter* offered this perspective: “He was an integral part of the Jean-Robert family tree and he took his job as teacher and mentor seriously.” she said. ”From the Maisonette…and the subsequent JR Group places, plus…Kenwood Country Club, that's hundreds of lives connected.”

When mixology star Molly Wellman* first moved home from San Francisco 10 years ago, Whalen brought her in as the bartender. Wellmann said he set up a place in his kitchen where she could prepare her mixers, bitters and tinctures, and he even taught her about flavors—setting her on a path that’s taken her far.

“Jared was a lovable guy and a strong leader,” de Cavel said. “He gave his knives away to the good cooks and forced people to be better.” A note about chef culture: chefs don’t give away their knives. Knives are practically an extension of a chef’s arm and the fact that Whalen did, shows how much his team meant to him.

“If you’ve ever seen The Goonies, he is Mikey. Everyone believes in him,” Steven Shockley* said. “That was his magic.” (The Goonies is a 1980s adventure movie about a group of kids led by the “captain,” Mikey.)

Armed with a gift of gab and an effusive love for cooking, Whalen’s leadership was spellbinding. “He had a glow in the kitchen and everyone gravitated towards him,” Eddie Travis Reidel* said. “He had style and a coolness I worshiped and admire.”

Whalen’s culinary genius flowed with a good measure of fun and promise of mischief. Stephen Williams* remembers well how Whalen would let out a “mad scientist cackle” whenever he went around the kitchen spontaneously creating new dishes—during dinner service.

Stories of Whalen’s sense of humor are abound, ranging from restaurant floor mats getting switched around locations to the temporary “kidnapping” of de Cavel’s beloved la chouffe gnome.

Sometimes I still wonder which cook got the wrath of Whalen’s wasabi trap those years ago. His eyes twinkled when he told me how he’d asked one of his new cooks to sample matcha ice-cream which was actually a ball of wasabi.

The working conditions in the restaurant kitchen are as unforgiving as they are rewarding. The best and the worst of human nature are often on full display. That’s also why the restaurant industry tends to forge lifelong friends and in many cases, families.

“At the end of the day, it’s about the people,” Bhumin Desai* said. “The people you are around countless hours become your family. Jared was family to me.”

In his roughly 20-year culinary career, Whalen has shaped new chefs and leaders, raised the dining standards, and shown us how to work hard and still have fun.

This week, the restaurant family lost one of its own. Many hearts are hurting and things will never be the same. But with every story shared, I see how Whalen has forever left his mark on the industry. Rest in peace, Chef.

Grace Yek writes about food for WCPO Digital. She is a certified chef-de-cuisine with the American Culinary Federation, and a former chemical engineer. Connect with her on https://www.graceyek.com/.