We checked out Cityscape Tile and we're in love 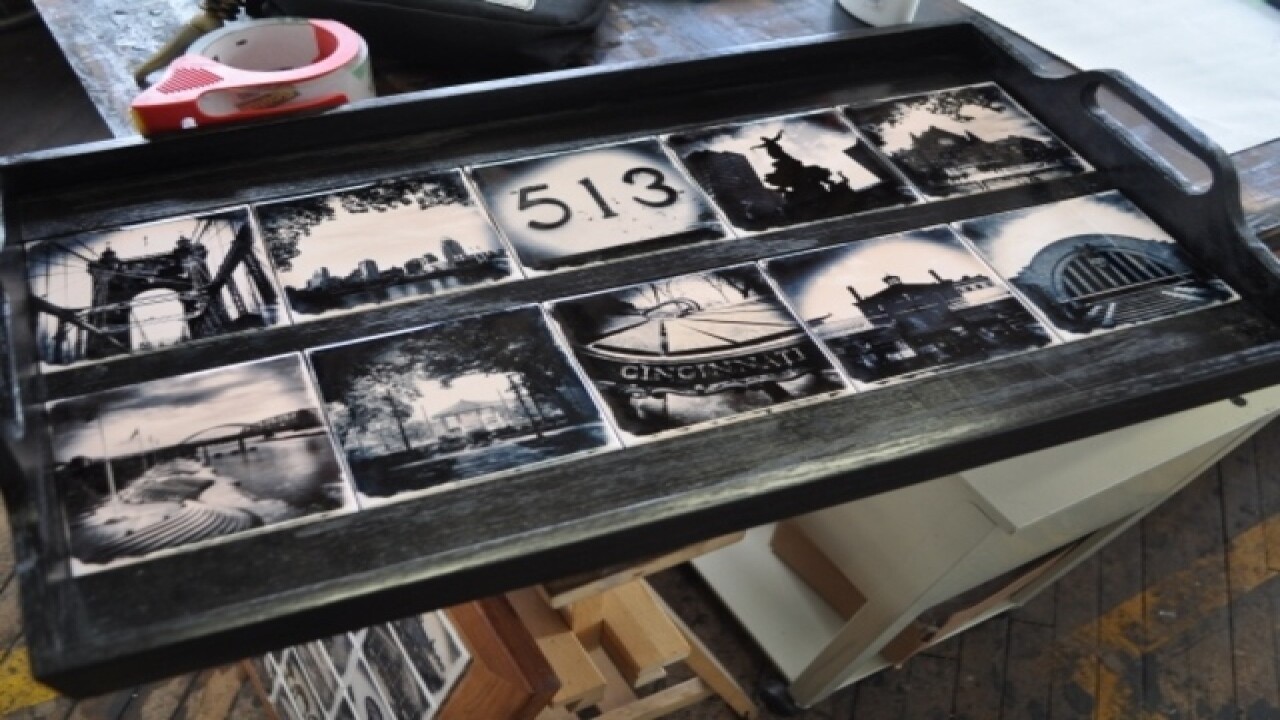 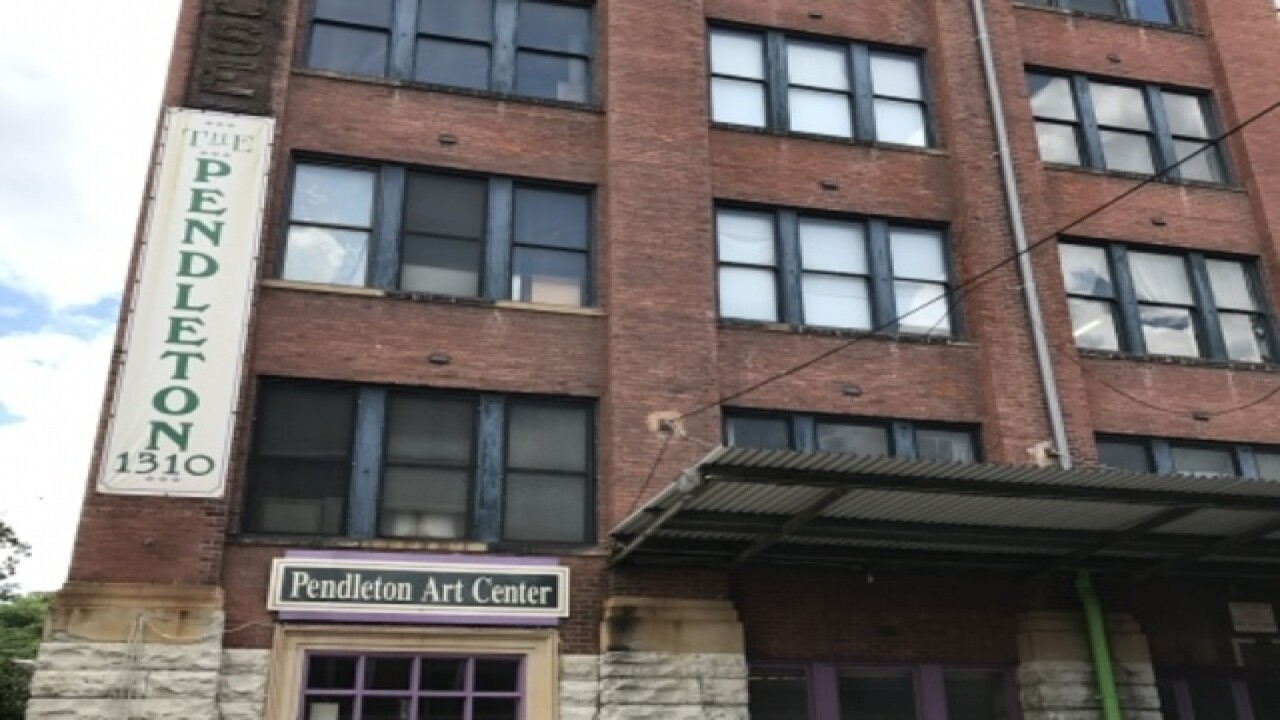 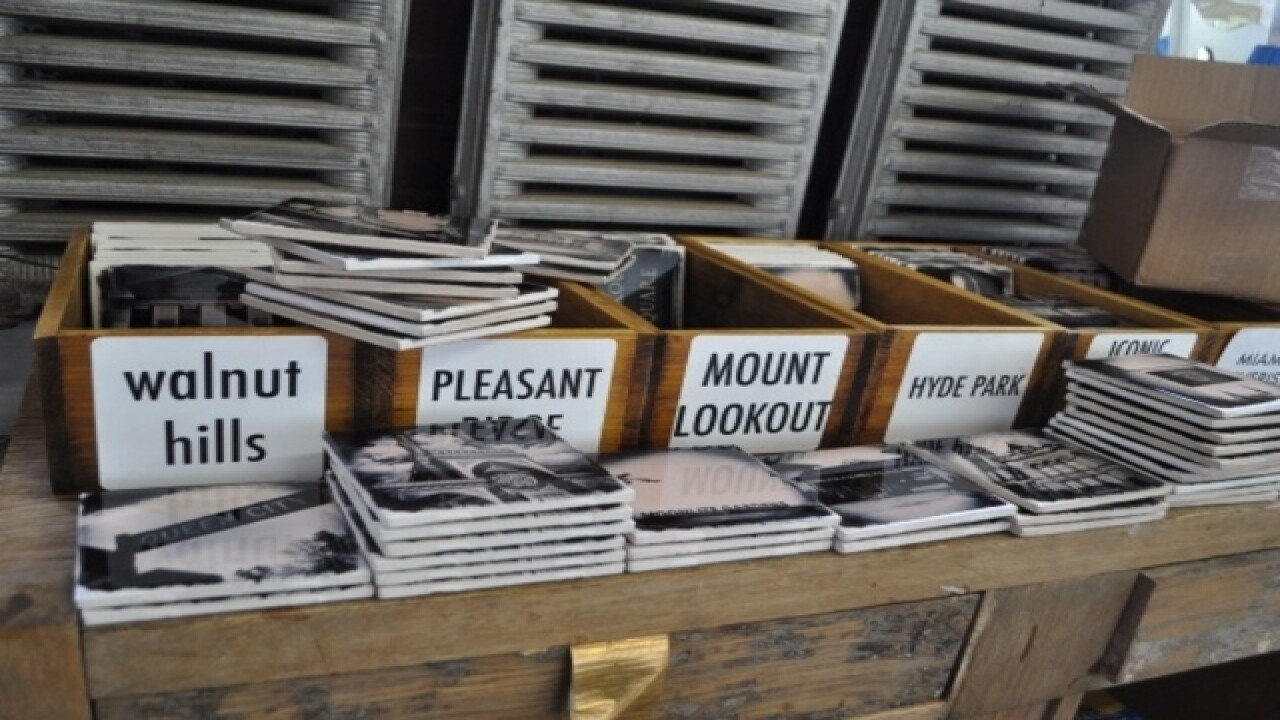 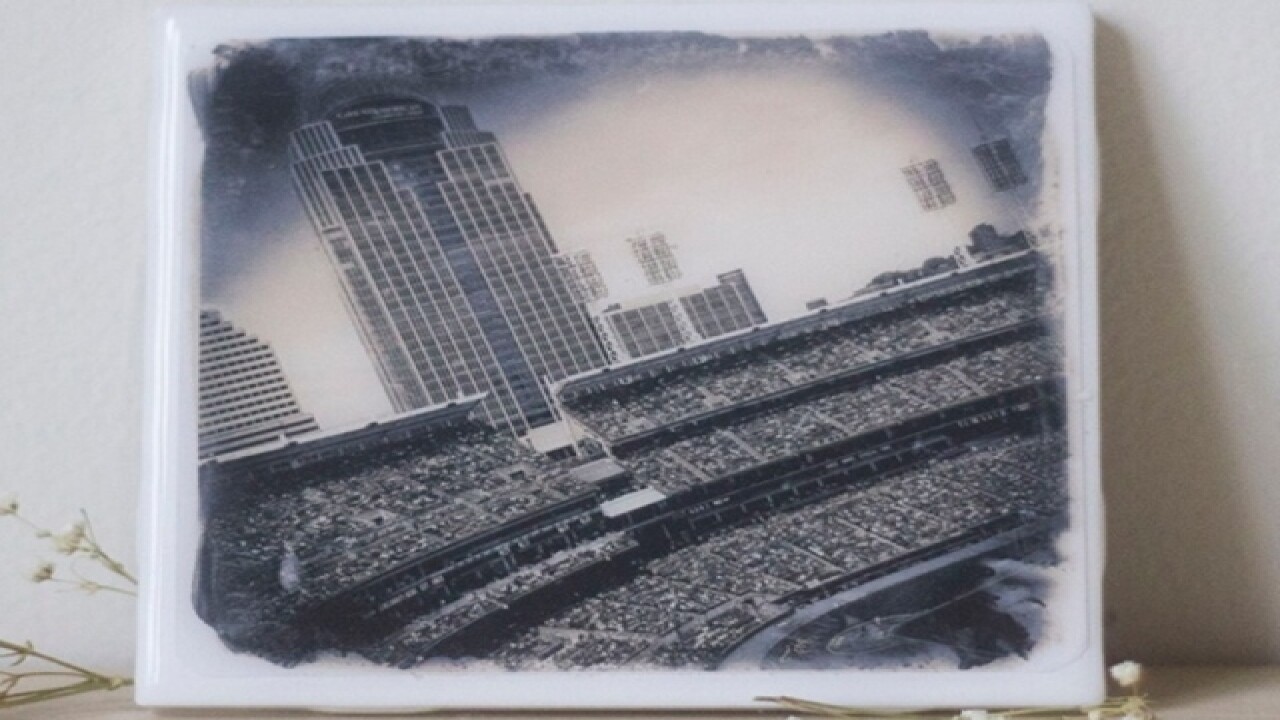 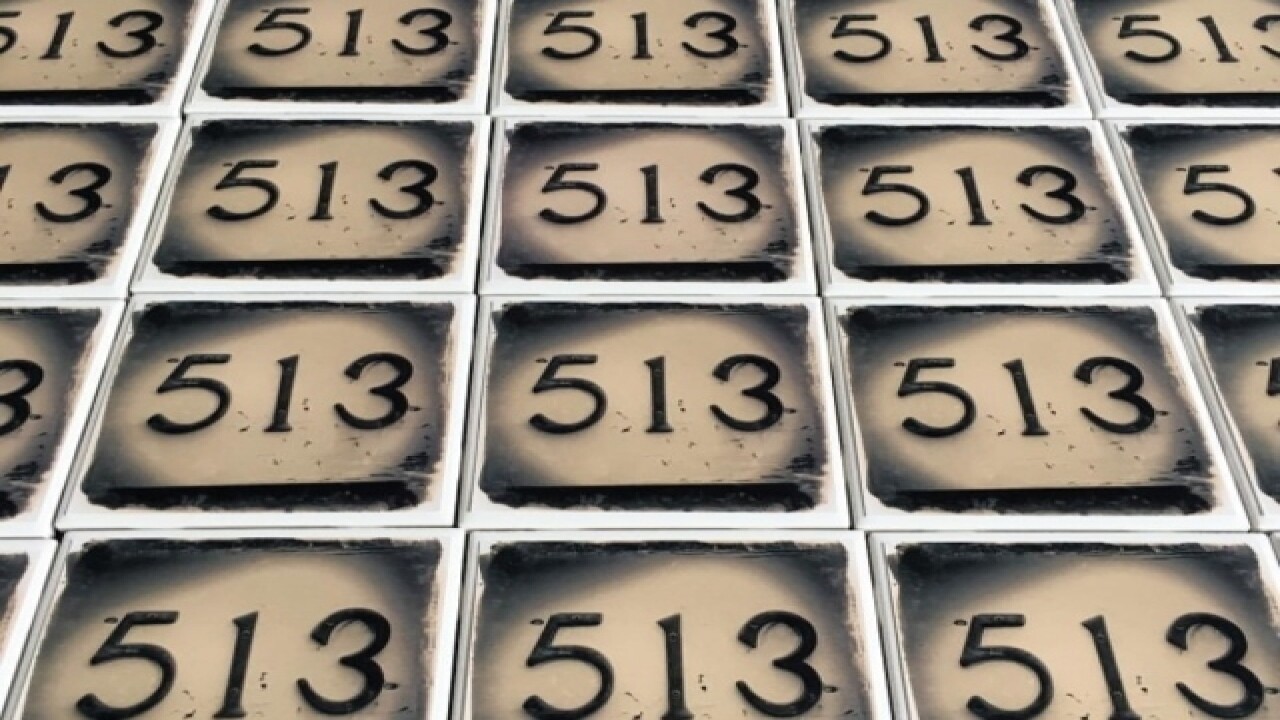 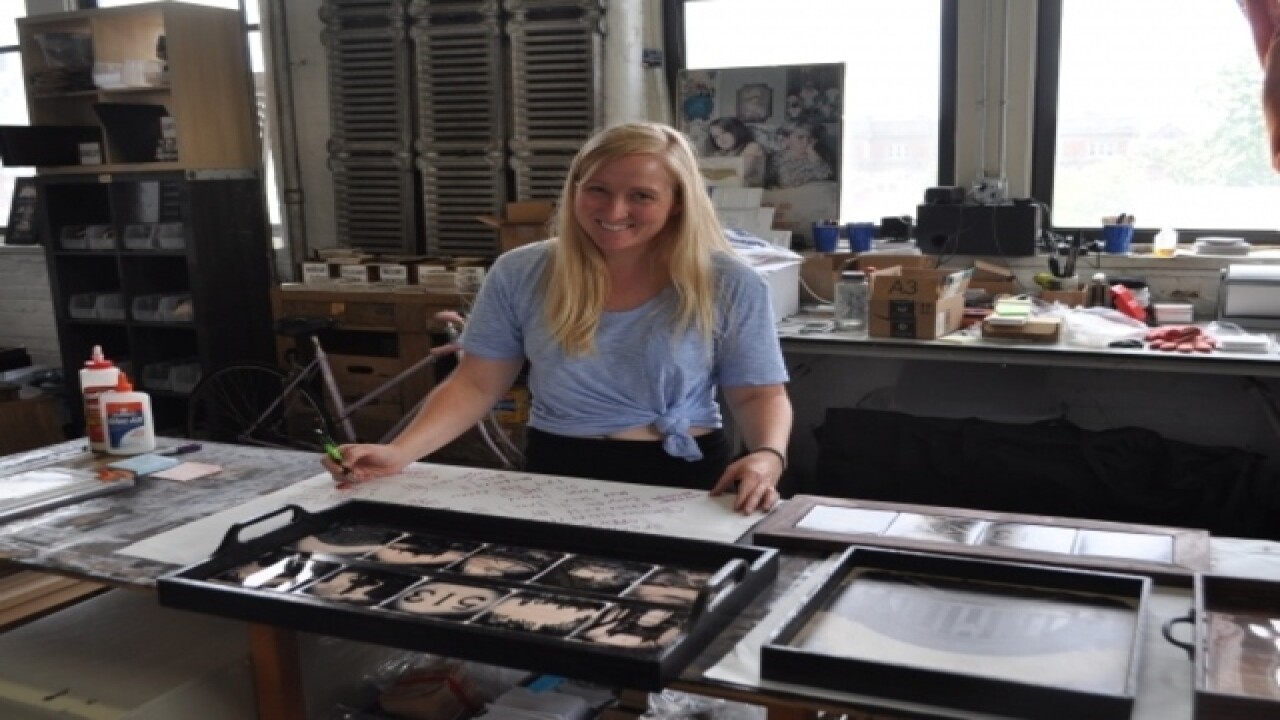 CINCINNATI -- It's highly possible you've seen her at local markets.

Maybe you even own one of Jess Sheldon’s works of art – ceramic squares affixed with antiqued black and white photographs of our favorite Cincinnati places: Great American Ball Park, Roebling Bridge, Cincinnati Museum Center, scenes from the West Side, Oakley, Wyoming.

Nestled in the Pendleton Arts Center, Sheldon’s Cityscape Tile is packed with hundreds of hand-made coaster tiles perfect for gift giving, or gifting to yourself.

"I always try to keep it fresh and interesting," she said.  "I'm still photographing new places and creating new collections. The possibilities are essentially endless."

The best part for Sheldon? Hearing the reason behind your selection, "why people are drawn to certain things.
"I think that's the coolest component of what I do," she said. "People want something memorable. And they definitely love their neighborhoods."

Sheldon's "not a coaster person."

Yes, that's hard to imagine, but in all fairness, table protection wasn't her original intent.

"I gave the first tiles to my boyfriend as a gift, and he started using them as coasters," she said. "The rest is essentially history."

Each tile is made by hand. The work, Sheldon admits, can be labor intensive. She prints her pictures on photographic paper and transfers them to the ceramic. From there, the image is coated – that process is proprietary – so it's 100 percent waterproof, heat and cold resistant.

She initially rolled out with her old Over-the-Rhine snaps but quickly moved on to other landmarks in the city. She's documented nearly every Cincinnati neighborhood in the time since – even a dozen others outside the Tri-State, and has expanded the product line to include magnets and wall art.

Serving trays are one of the newest items to the mix – a must have that's completely customizable.

As for the tiles, which are priced at $14 a piece, the "513" ranks among the most popular. "I don't know if everyone's like that with their area code. Older people definitely don't get it, but for the younger generation, it's fun," Sheldon said.

Other top sellers, in no particular order, include Rabbit Hash, Washington Park, Fountain Square. Among the latest craze, Western Bowl Strike & Spare on Glenway Avenue. Rhinegeist also ranks highly.
"Why is that one popular? I have no idea," Sheldon said. "In terms of photography, it's not my most artistic, but it excites people. It's a cool place.”

Back then, it was more about people than places.

Fast-forward 15 years, and Sheldon, who had moved away, was back, and there was "change in the air." She could see the Over-the-Rhine’s - and the city's - potential, although she swears she never intended to stay.

Canvassing once more, she spotted a dumpster of tiles from a demo underway on Race Street. Inspiration struck.

"Next thing I know, I'm putting my old photographs on these tiles," she said. And, maybe even more surprisingly, Cincinnati stuck.

"I realized I had never given Cincinnati a chance as an adult," Sheldon said.

Sure, there was the old adage that the city was always "10 years behind" – thanks, Mark Twain – "but that's also what makes Cincinnati so cool and ripe for this kind of thing," she said.

"People are excited to be a part of Cincinnati. You see the emergence of all these markets, local entrepreneurs and makers," she said. "That's something we didn't have 10 years ago. There's this blank canvas."

Sheldon finds inspiration in many places. Her Pendleton Arts Center studio is part of the world's largest collection of artists under one roof. The building, a former shoe factory that stands eight stories tall, is home to 200 crafters who work in mediums from stained glass to oil painting.

"As soon as I committed to this space, my whole business changed," she said. "When I first put my name on the waiting list, I was told it would be a year." She got a call two months later.

"I really agonized over it. But it gave me the room to create, to build inventory, to network with other artists, and the confidence to say, 'You're ready. You can do this. You've carved out a niche, and you're passionate about it. Just go for it.'"

If you've been to The City Flea or OFF Market in Oakley, chances are you've seen her booth. She can be found at dozens of weekend shows each year.

But the single best way to browse her entire collection – including experimentals and one-offs, as well as those aforementioned serving trays – is during the Pendleton Arts Center's Final Friday Gallery Walk. Think music, food, beer and wine, and endless pursuing. Her tip? Take the elevator – it's old, old school – to the eighth floor and work your way down. The next Final Friday is June 30 from 6 to 10 p.m. The event is free; there's standard street parking and valet service for $5.

"It's a great opportunity to come look at art in a non-pretentious way," Sheldon said. "It's not like a museum; it's mostly people's workspaces, which can be really interesting. And you're meeting the actual people behind it."
After all, that's what keeps her going – connecting with customers who connect with her form of "portable art."
"That really energizes me, for sure," she added. "I've been meeting a lot of young kids, and a lot of artists will come through here, and it's fun to show them that it's possible to make a living doing what you love. And I love what I do."