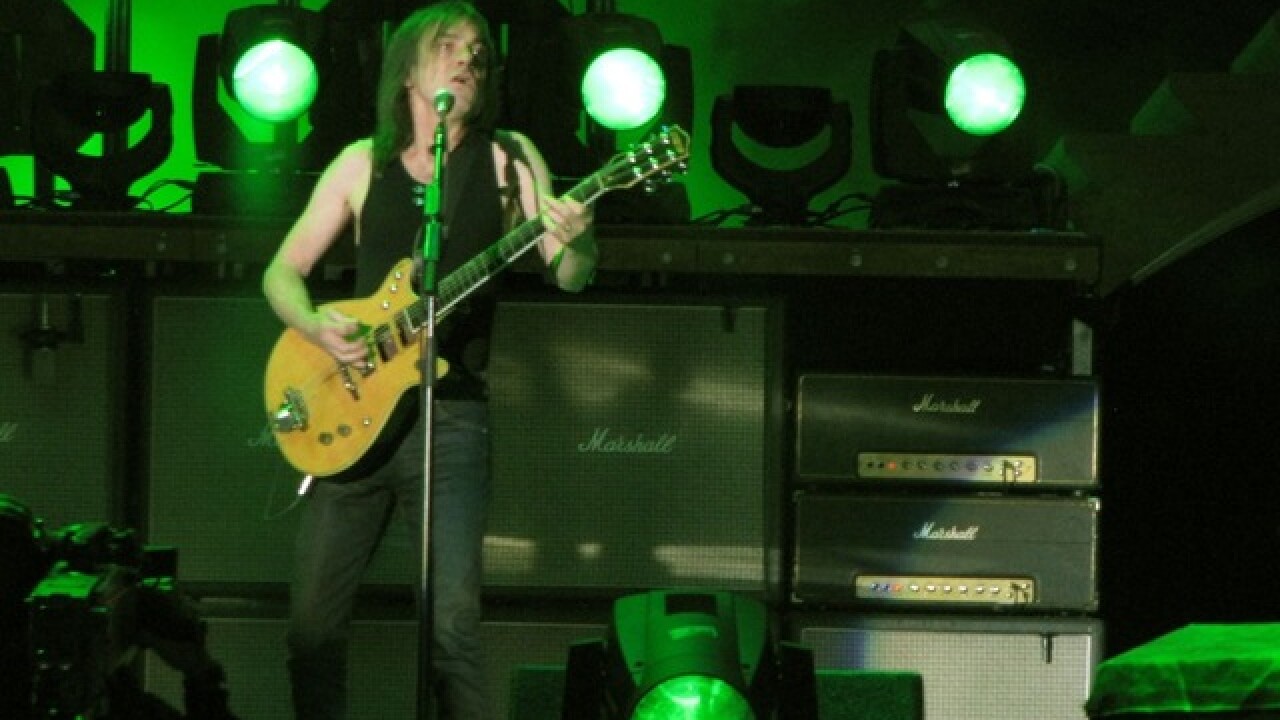 NEW YORK -- Malcolm Young, the rhythm guitarist and guiding force behind the bawdy hard rock band AC/DC who helped create such head-banging anthems as “Highway to Hell,” ″Hells Bells” and “Back in Black,” has died. He was 64.

AC/DC announced the death Saturday on their official Facebook page and website Saturday. A representative for the band confirmed that the posts were true. The posts did not say when or where Young died, but said the performer had been suffering from dementia. He was diagnosed in 2014.

“It is with deepest sorrow that we inform you of the death of Malcolm Young, beloved husband, father, grandfather and brother. Malcolm had been suffering from Dementia for several years and passed away peacefully with his family by his bedside,” one of the posts read.

The family put out a statement posted on the band’s website calling Young a “visionary who inspired many.”

While Young’s younger brother, Angus, the group’s school-uniform-wearing lead guitarist, was the public face of the band, Malcolm Young was its key writer and leader, the member the rest of the band watched for onstage changes and cutoffs.

AC/DC were remarkably consistent for over 40 years with its mix of driving hard rock, lusty lyrics and bluesy shuffles, selling over 200 million albums, surviving the loss of its first singer and creating one of the greatest rock records ever in “Back in Black,” the world’s second best-selling album behind Michael Jackson’s “Thriller.”

The Glasgow-born Young brothers — who moved to Sydney, Australia, with their parents, sister and five older brothers in 1963 — formed the band in 1973. They were inspired to choose the high-energy name AC/DC from the back of a sewing machine owned by their sister, Margaret.

Angus experimented with several different stage costumes at first — including a gorilla suit and a Zorro outfit — but the school uniform was a natural, since he was only 16 at the time.

The Youngs went through several drummers and bass guitarists, finally settling on Phil Rudd on drums in 1974 and Englishman Cliff Williams on bass three years later. Their original singer was fired after a few months when they discovered Bon Scott, who was originally hired as the band’s driver.

By 1980, the band was on a roll, known for its high energy performances and predictably hard-charging songs. Their album “Highway To Hell” was certified gold in America and made it into the top 25 Billboard album charts, and the single “Touch Too Much” became their first UK Top 30 hit. But on Feb. 18, 1980, everything changed — Scott died of asphyxiation after choking on his own vomit after an all-night drinking binge.

The band decided to keep going and hired English vocalist Brian Johnson at the helm. The newly reconfigured group channeled their grief into songwriting and put out 1980′s “Back In Black,” with the songs “You Shook Me All Night Long,” ″Rock and Roll Ain’t Noise Pollution” and “Hells Bells.” The cover of the album was black, in honor of Scott’s death.

The band continued with a studio or live album every few years , blending their huge guitar riffs with rebellious and often sophomoric lyrics — song titles include “Big Balls,” ″Beating Around the Bush,” ″Let Me Put My Love Into You” and “Stiff Upper Lip.” AC/DC won only a single Grammy Award, for best hard rock performance in 2009 for “War Machine.”

Rolling Stone said in 1980 that “the AC/DC sound is nothing more and nothing less than aggressively catchy song hooks brutalized by a revved-up boogie rhythm, Malcolm’s jackhammer riffing, Angus’ guitar histrionics and Johnson’s bloodcurdling bawl.”

In the book “The Youngs: The Brothers Who Built AC/DC” by Jesse Fink, Angus Young said the formula worked. “We’ve got the basic thing kids want,” he said. “They want to rock and that’s it. They want to be part of the band as a mass. When you hit a guitar chord, a lot of the kids in the audience are hitting it with you. They’re so much into the band they’re going through all the motions with you. If you can get the mass to react as a whole, then that’s the ideal thing. That’s what a lot of bands lack, and why the critics are wrong.”

AC/DC’s infectious, driving sound stretched further than rock arenas. The song “Shoot to Thrill” was heard in the film “The Avengers,” ″Back in Black” made it into “The Muppets,” ″Dirty Deeds Done Dirt Cheap” was played in “Bridesmaids” and their songs were included in the “Iron Man” franchise. On TV, the band’s music was heard in everything from “Top Gear,” the “Hawaii Five-0" reboot, “Glee,” ″CSI: Miami” and “The Voice.”

Though the band championed good-natured hell-raising, it had to weather suggestions in the 1980s that they were a threat to the moral fabric of society. There were rumors the band’s name stood for Anti-Christ/Devil’s Children and many were shocked when it was learned that serial murderer and rapist Richard Ramirez identified himself as a fan and left an AC/DC baseball cap behind at a crime scene.

In 2014, the band released “Rock or Bust,” the first AC/DC album without Malcom Young. Even so, he is very present on the record since the 11 songs are credited to the Young brothers (Angus said he built the album from guitar hooks the two had accumulated over the years).

Around the album’s release, Angus Young told The Associated Press that Malcolm was doing fine, but that he couldn’t perform anymore.

“It was progressing further, but he knew he couldn’t do it,” Angus Young said of his older brother’s dementia. “He had continued as long as he could, still writing. But he said to me, ‘Keep it going.’”

The fate of the band was also put into doubt by the retirement of Williams, legal trouble for Rudd and Johnson’s hearing loss, which forced him to leave. The band enlisted Guns N’ Roses frontman Axl Rose to sing on tour in 2016.