Dirty Dining: How clean is your kids' school cafeteria? 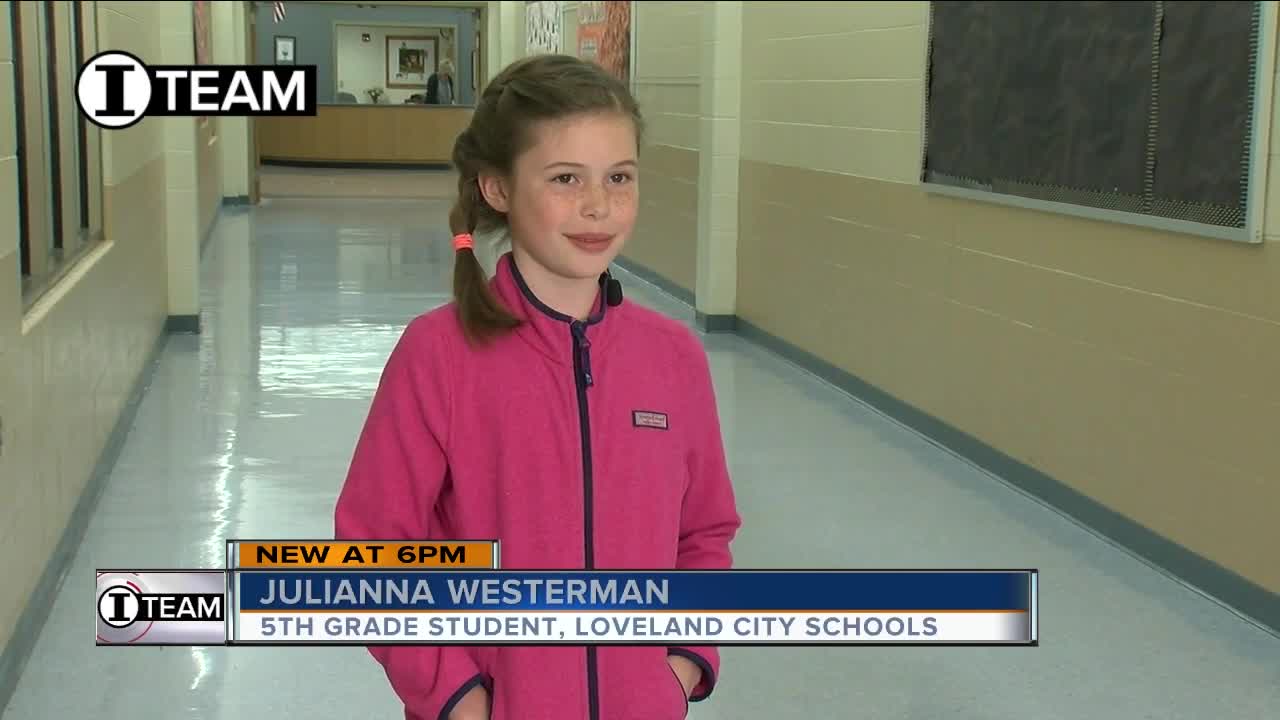 Across Greater Cincinnati, school cafeterias and daycare facilities tend to have fewer health code violations than other kinds of food-service providers. But there are icky exceptions to that rule.

“The school’s lunches are really good, and I think I like them better than packing,” the 10-year-old fifth-grader said.

The cafeteria always looks good, too, she said.

“Every time we go,” Julianna said, “the tables are wiped down and we have, like, new trays every time. It’s really clean in my opinion.”

She isn’t the only one who thinks so.

Loveland Intermediate School is one of four Loveland City Schools that Hamilton County Public Health has recognized for their strict adherence to food safety codes.

“We do it by teaching and learning and doing what is right,” said Kris Tracy, district food service director for Loveland City Schools. “We have had a violation. Nobody’s perfect. But we go from that violation, and we do better.”

Forty six percent of the 467 school and daycare facilities in our database had no violations in 2018. The remaining 256 averaged 2.8 violations per location.

The numbers for everybody else? Only 26 percent had zero violations. The remaining 6,025 facilities averaged 6.4 violations per location.

“Especially with schools, they tend to be an experienced staff. They have lower turnover, and they tend to be very responsive to us in the inspection process,” said Ted Talley, an environmental health manager for the Northern Kentucky Health Department. “They take a lot of pride in their work.”

But not every facility gets a good report card when the inspectors visit. The I-Team’s review found that a number of schools had problems in 2018, particularly those with aging infrastructure.

A tale of two districts

Indian Hill and Lockland are worlds apart when it comes to the resources available to their school districts. But they’ve had one thing in common in the last several months: Mice were found in their older buildings.

“Observed mice feces in dry storage room,” a Hamilton County inspector documented March 5 at Indian Hill Middle School, built in 1960. In September, an inspection at Indian Hill High School turned up “evidence of mice under holding equipment and storage areas where fryers used to be, under shelving in storage room, and in corner of floor behind the cooler where the deli sandwiches used to be prepped.”

“That’s gross,” said Jessica Levine, a PTO volunteer with four children in the Indian Hill Exempted Village School District. Levine suggested the age of its middle school might have something to do with the mouse problem. But she was also disturbed by repeat violations at the high school for a buildup of dirt and debris under equipment and shelving. The high school was built in 2004.

The age of buildings “shouldn’t affect the cleanliness,” Levine said.

“We are not happy with the conditions cited,” said Heather Higdon, director of communications for the district. “We have high standards, and we expect pristine handling and cleanliness at all times.”

Higdon said Indian Hill administrators “expressed dissatisfaction” to its food-service vendor Aramark. “The facilities team within the district now daily checks the kitchen storage areas to ensure they are properly maintained,” she added.

Lockland reported 493 students on its report card that year, with operating expenditures of $9,995 per student.

But the mice aren’t concerned about those numbers. They’re just looking for a way in.

“There’s a very small amount of space that a rodent might need,” said Lockland Superintendent Ted Jebens. “When you have a building that’s up to 107 years old, there’s cracks in the foundation. Some of the doors might not have the correct seals underneath and there are areas in the building where -- whether it’s bugs, whether it’s water, whether its rodents – have the opportunity to come in.”

Jebens is pursuing a $26 million renovation for the six-building complex that serves students from preschool to high school. The oldest building opened in 1912, when Lockland actually had locks connecting the Miami and Erie canals. The newest section was built in 1990. Plans call for everything to be replaced except for the historic facades.

But Jebens couldn’t wait for renovations to solve the mouse problem.

“All the shelving was taken out of here,” he said, while showing WCPO the storage room cracks that were sealed after a mouse left droppings in December. “Everything was bleached and the correct sanitation was done. They came in and made sure they exterminated.”

Jebens also replaced exterminators in 2018 and redoubled efforts to keep the building free of food scraps.

Across the river in Bellevue, Kentucky, inspectors observed mouse droppings in five locations at Grandview Elementary School on March 11. An inspector from the Northern Kentucky Health Department also documented gaps “at the bottom corners of the loading dock doors,” a possible entry point for rodents. And a “hot spot pest strip” was being used in the dishwashing area: “These strips are not permitted … due to the toxic vapor they emit,” the inspector wrote.

Bellevue Independent Schools has not responded to WCPO’s questions about this inspection. Records show the district resolved all issues except the loading dock gaps by March 21.

The Campbell County School District declined to comment about its violations for rodent droppings, documented by an inspector in February and August of 2018 at Donald E. Cline Elementary School in Cold Spring. The August incident did not result in a violation, in part because the droppings didn’t appear to be recent.

“Inspectors consider if the activity appears to be recent, the location -- food or food contact surfaces versus non-food contact surfaces -- of the activity, and exposure risk when determining required action,” Laura Brinson, public health impacts administrator for Northern Kentucky’s health department, wrote in an email to WCPO. “Conversations with facility management, staff and contractors occur frequently. This process is not detailed on inspection reports but is taken into consideration when judging the degree of risk to the public.”

Rodents aren’t the only pests attracted to school lunches: Bishop Brossart High School in Alexandria had an ant infestation 15 months ago. The Covington Archdiocese declined to discuss the incident. Spokeswoman Laura Keener said, “The problem was remediated.”

Inspectors took photos of what they saw at Bishop Brossart, including a picture of a disposable glove covered with the insects.

“We never did figure out why the ants were attracted to that glove,” Talley said, or exactly how they got into the building. “It’s an older facility, that’s for sure.”

Tracy agreed that older buildings could present challenges that newer facilities don’t, including “things like mice coming in and bugs finding their way in.” Loveland’s oldest building, an Elementary School built in 1941, was cited for mouse droppings in December 2017. Records show the problem was resolved within four days and never returned.

“When something’s old, you just need to take care of it,” Tracy said. “I know it’s busy but just watch your kitchens. Train your staff and make them want this to be their happy place.”

Schools also have to be certain their food is safe for young children whose immune systems aren’t fully developed and for children with food allergies or compromised immune systems.

‘Different eyes on it’

Many of the school’s clients have special diets, whether that is because of food allergies or because their food must be pureed in order for them to be able to eat it, he said.

“Obviously, we take that very seriously with our clients that are medically fragile and those that aren’t,” Wagner said.

Wagner said Redwood has a pest control company that visits each month to prevent problems.

“To be honest, when you’re dealing with such a big building and food and classrooms, it’s always going to be there to some extent,” he said.

“We have a team that goes around with the inspector so we’re all on the same page,” he said. “We see the food service every day. And it’s easy when you see it every day to maybe overlook something. So that’s why it’s good to have different eyes on it.”

Taft IT High School had eight surprise audits this year with no findings of food-safety problems. Cincinnati health inspectors found a total of 10 violations in two 2018 visits, including three for holding foods at the wrong temperature and three for problems related to cleanliness. All of the violations were corrected while the inspector was on site.

“We believe our schools, especially our lunchroom areas, are clean and safe,” Russ said.

Back in the Loveland district, Tracy personally inspects the district’s kitchens twice a month. She called it “heartbreaking” any time her staff gets a violation. And it doesn’t happen often. WCPO counted only five violations since 2015 in six buildings operated by Loveland City Schools.

The best part of the job, though, is seeing students enjoy the meals the food service staff has prepared, Tracy said.

Like the nacho haystacks Loveland Intermediate School served for lunch on a recent Tuesday.

Julianna said that’s her favorite, and a classmate concurred.

“It is delicious,” said Wyatt Allendorf, an 11-year-old fifth-grader, adding that he would rate the school cafeteria “nine out of 10.”

“All the people there are nice. There’s nice teachers, and the food’s really good,” Wyatt said. “Sometimes, every once in a while, I’ll find a stale macaroni or something like that. But most times it’s really good.”