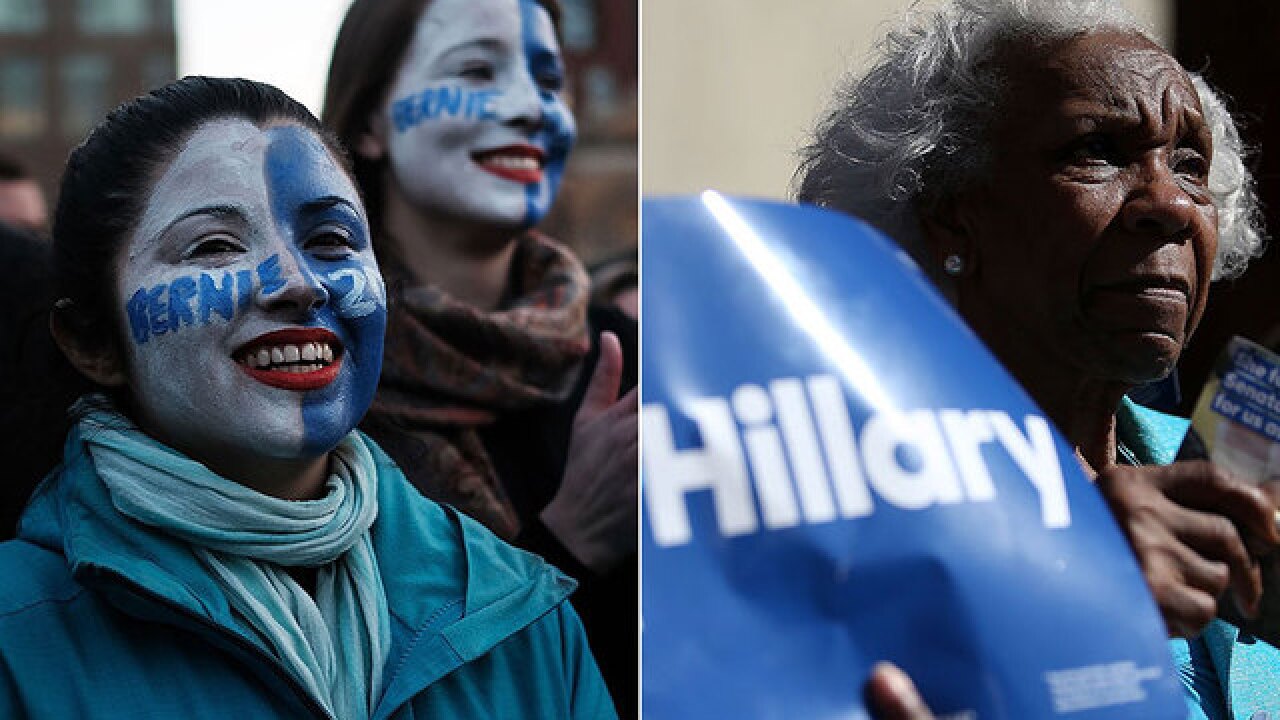 Hillary Clinton and Bernie Sanders pulled out all of the stops in the final days before Tuesday’s New York primary, and the techniques each used to court voters highlighted the differences that have defined the candidates throughout the primary season.

Starting off his New York tour with a bang, or at least a guitar riff, the Vermont Senator hosted a star-studded rock concert and rally in NYU’s Washington Square Park.

Almost 30,000 people attended the show, where Vampire Weekend headlined and smells of marijuana wafted through the chilly night air. There also was a “Berning for Bernie” event in Brooklyn’s Prospect Park on Sunday and a final one in Long Island City on Monday. Both generated crowds of about 20,000 people.

Clinton’s tactic could be described as much more demure. Instead of headline-worthy rallies, she tends to prefer her events to be low-key and controlled. But what she lacked in wow-factor this week, she tried to make up with numbers.

Over the weekend the former Secretary of State held two rallies, one in Staten Island and one surrounded by her female politician posse in Manhattan. Surrogates such as New York Rep. Charlie Rangel and actor Jeffrey Wright stumped for her in all five boroughs on Saturday. She sent husband Bill upstate on Monday to Rochester and Buffalo after he campained in the Bronx and Manhattan last Friday. A pregnant Chelsea Clinton also covered four events on her own on Friday in Long Island, Brooklyn and Manhattan, and she was in Watertown on Monday.

Hillary had a distinct crowd of supporters at every event: lots of women, lots of children, and lots of people middle-aged or older.

Sanders and Clinton have emphasized the importance of winning New York, and they both have strong-ties to the state. Clinton was the state’s senator from 2001 to 2009, and Sanders was born and raised in Brooklyn. Even more importantly, New York offers up 247 delegates, which could be a significant opportunity for Sanders, who is fighting in every primary to gather enough bound-delegates to turn Superdelegates to his team.

In his final concert event Monday evening, Sanders told the crowd to take a “giant step” toward the political revolution by voting for him in the “enormously important” New York primary.

Televisions also bared witness to the fight between the two Democrats. Each candidate released multiple ads touting their support for the state, highlighting famous New Yorkers in history, and essentially appealing to voters as the most “New York” of the candidates.

A Sanders ad released Saturday compared the senator to President Franklin Delano Roosevelt, who grew up in the state. The ad said of the 32nd president, “Even when the deck is stacked, a New Yorker will find a way to break up big banks, create millions of jobs and rebuild America.” Sanders visited FDR’s Hudson River Valley home last Tuesday.

On Friday, the Clinton campaign released an ad that highlighted work she had done as New York Senator — opening the Bronx Eagle Academy, a public school for young African American men.

In the commercial the Bronx Eagle Academy school principal talks about Clinton saying, “For me, and what I’ve known about Hillary Clinton, she’s as good as it gets.”

Each candidate milked the final hours they had in New York City on Monday before voters headed to polls Tuesday. In addition to her female-centric rally in Manhattan, Clinton made an appearance on Stephen Colbert’s The Late Show where she took a quiz on what she had in common with Donald Trump.

Bernie Sanders spent the day walking around various neighborhoods in the city. He visited a Bronx housing project and released a video of actor Mark Ruffalo interviewing him in the senator’s hometown neighborhood of Brooklyn before holding his last concert later that night.

Despite Sanders’ big push, statewide polls show him lagging significantly behind Clinton in the state. An Emerson College poll released this week shows Clinton with 55 percent compared to Sanders’ 40 percent. Many have critiqued New York’s strict closed primary rules as the biggest barrier for Sanders.

Not only can residents not vote in the primary unless they are registered Democrats, but also the deadline to change their party affiliation was back in October of last year. It’s those same rules that somewhat awkwardly kept Donald Trump’s own children from being able to vote for him in Tuesday’s primary.

There is a silver lining, though, for Sanders. As his campaign moves on to Pennsylvania and the next primary—he’s not even waiting in New York for the results to come in—a newly released poll shows he has made huge strides nationally. He’s now only two points behind Hillary Clinton.

Sanders may not win the Big Apple, but the show’s not over yet.