No highlights that will make a difference 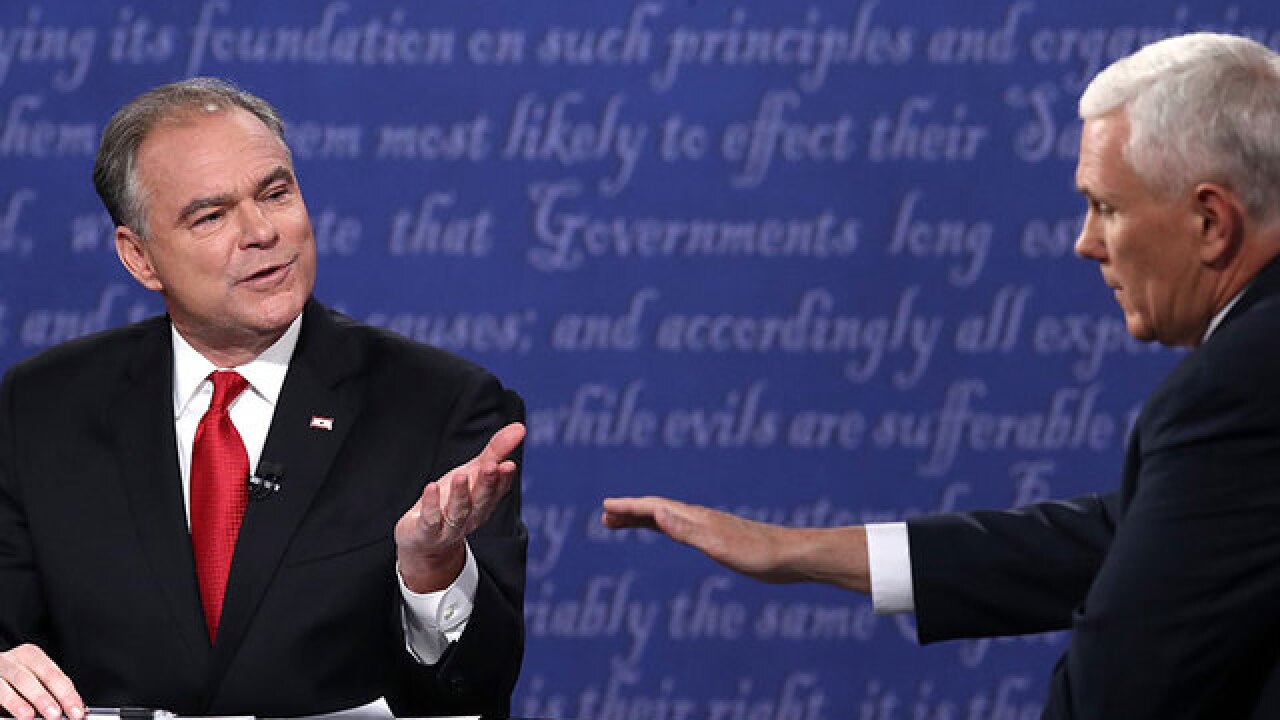 Tonight’s joust between Mike Pence and Tim Kaine may have been the most memorable vice presidential debate since 1980.

Wait, there was no vice presidential debate in 1980.

Thus is the common fate of these under-card bouts — incidental and forgettable. Veep debates generally stick to the pattern of “all gaffe, no glory.” Blunders and the best put-downs are remembered and memorialized as sound bites on highlight reels; smart, solid performances are soon forgotten, but neither changes the course of elections.

Tonight’s debate between Kaine and Pence fit the pattern, though there was scant material for the highlight reels of the future.

Previews predicted a “thrilla in vanilla.” A Republican consultant who has had glory in campaigns past said the Kaine-Pence match “will be the least consequential vice presidential debate of the modern era.”

That may turn out to be the case, but it would be ironic. One can make a strong case that this is the most consequential presidential election of the modern era simply because Donald Trump is so abnormal and unpredictable. That should make this vice presidential debate more important, not less. But Trump towers over everything in this election. He’s huge.

Trump and Hillary Clinton would be the oldest and second-oldest presidents ever inaugurated. That should make the veep debate all the more important this year; one of these characters might be commander-in-chief some day. But the debate did not have the aura of a momentous event. Trump towers, casting shadows everywhere.

Pence’s job was akin to a defense attorney in a death penalty case who knows his client is going to take the stand — again and again. He tried to embody a kinder, gentler Donald Trump that simply doesn’t exist.

Given those constraints, Pence’s performance, stylistically, was professional and slicker than spilled soup on a floor.  In his listening pose, Pence looked like he was in a church choir. When talking, he had the down to earth cadence of Ronald Reagan saying, “There you go again.”

But Pence turns out to be pretty good with a shiv and he never got flustered. He lived up to his moniker as “Rush Limbaugh on decaf.”

Kaine and Clinton are running on an “avalanche of insults,” Pence said with a totally straight face.  Kaine is a “fitting running mate” for Clinton, Pence said, if you “want more of the same.” “You can roll out the numbers,” Pence said, with a Trumpian disdain for evidence, “but people know different."

Tim Kaine got through all his set pieces and launched his full arsenal of zingers with panache. He was articulate and precise. He backed Pence into corner after corner and Pence too often responded by denying Trump said what he said. Women who have abortions should be punished; Trump never said it, but he did. Putin is stronger than Obama; Trump never said it, but he did.

“Six times tonight I have said to Gov. Pence' I can’t imagine how you can defend your running mate’s position,'” Kaine said, late in the evening. “He is asking everybody to vote for somebody that he cannot defend.”

But Kaine interrupted Pence far too much.  Often he did so when the moderator was doing his work for him, trying to pin Pence down.  The post-mortem polling probably will find that Kaine came off as clever, but yippy and small-minded. He was all tactics and barbs, no big picture or overarching philosophy.

The fact-checks and consistency monitors will add up on Kaine’s side. On several issues, Syria and Russia for example, Pence’s positions bore little resemblance to Trump’s. But on atmospherics, Pence held his own or better.

That shouldn’t matter much and it probably won’t. This was not a debate that will change minds.  Democrats hoping that Kaine would vanquish Pence like Clinton did Trump last week will be disappointed. So will Republicans hoping Pence could score a clean kill and change the race’s momentum.

There’s a good chance that Trump’s debate tweets will get more attention than the debate itself. “Kaine looks like an evil crook out of the Batman movies," according to Trump’s thumbs. “CLINTON’S CLOSE TIES TO PUTIN DESERVE SCRUTINY,” Trump Twitter yelled.

Kaine and Pence came off much like two squabbling partisans on the Congressional Joint Committee of Fibs and Sophistry. It wasn’t enough to overshadow the Trump tower.

All in all, the 2016 vice presidential debate will have about as much impact on the course of history as the debate of 1980.