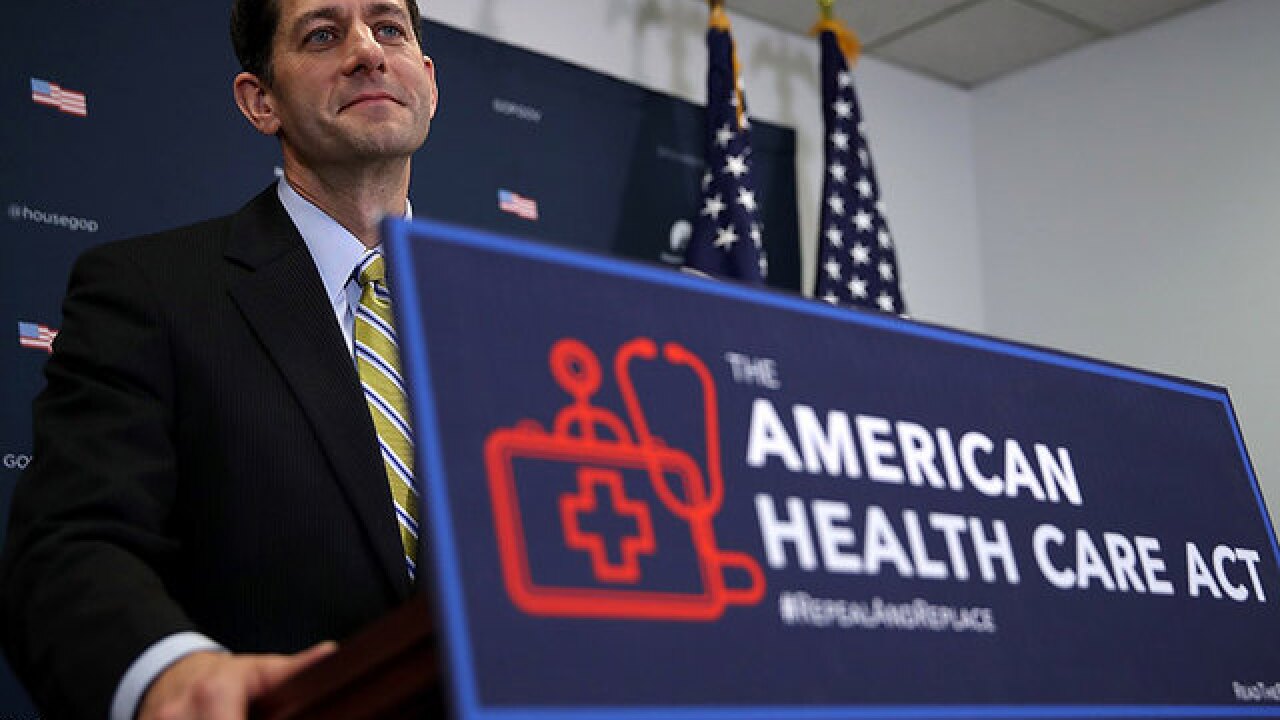 Image copyright 2017 Getty Images. All rights reserved. This material may not be published, broadcast, rewritten, or redistributed.
<p>House Speaker Paul Ryan, R-Wis., speaks during a news conference at the U.S. Capitol on March 15, 2017, about the Amercian Health Care Act. (Photo by Justin Sullivan/Getty Images)</p>

Current political obstacles aside, history subtly suggests the campaign to replace Obamacare with Trumpcare faces longer odds than one might otherwise think and not just for the current Republican proposal but for the entire repeal campaign.

In the nation’s 230 years, there have actually been only two landmark legislation acts that fundamentally changed the structure of health care delivery in America — Medicare and Medicaid in 1965 and Obamacare in 2010. Even narrow legislation is rare when it comes to fiddling with how we get and pay for doctors, hospitals and medicines.

A trail of circumstantial evidence suggests that without a modicum of political agreement that there is an obvious and dire problem, major changes to the health care system don’t happen.

It is not hard to understand why. Health care is the most personal of all pocketbook issues. Any legislative reforms must make explicit (though often disguised) zero-sum choices about the distribution of benefits and costs. And health care has become an enormous sector of the overall economy.

“Health care is complicated. One change can affect a large part of the economy directly or indirectly,” says Tricia Neuman, senior vice president at the non-partisan Kaiser Family Foundation. “Legislation is hard to put together and hard to unravel.”

The idea that government should have a role in health insurance and organizing medical care first hit the national stage in 1912, when Teddy Roosevelt’s Progressive Party — the Bull Moose Party — demanded that industrial workers should get health insurance. They lost.

Twenty years after his cousin’s campaign, Franklin Roosevelt wanted health insurance to be part of the first New Deal programs. He lost the fight and lost again in later years.

By the 1960s a major gap in the private system affected almost everyone. Health care had become much better and much more expensive. Masses of old and retired people couldn’t afford it. Nor could they get health insurance. Their children couldn’t afford to pay their parents’ bills. President John F. Kennedy pushed a program to insure seniors that was similar to how Social Security supplanted their incomes. He failed.

The problem got worse. On July 30, 1965, President Lyndon B. Johnson signed the bill that created Medicare and Medicaid.  Harry Truman was at his side. It was the first landmark legislation about health care, America’s first law establishing broad government-based health insurance.

In the 1980s, senior citizens faced a severe problem. Hospital bills and prescription medicines had become unaffordable for vast numbers of people on Medicare. Seniors, of course, come out to vote and they made themselves heard. In 1988, President Reagan signed major legislation intended to better cover prescriptions and medical catastrophes. The new benefits, however, were funded by new Medicare premiums. When time came to pay the premiums, seniors went on the warpath.

The Reagan bill was repealed 17 months after it passed. Later legislation did provide coverage for prescriptions and politicians relearned the unpredictable dangers of tinkering with people’s health care — even when they hate it.

Next came the Health Security Act — HillaryCare. There was broad, even bipartisan agreement on the problems that needed to be addressed: rising numbers of the uninsured, out of control costs and the health care sector was consuming such a large slice of the Gross Domestic Product that overall productivity could be slowed. There was not, however, agreement on the solution, and the Clintons failed.

President Barack Obama faced a more dire problem: More than 15 per cent of Americans lacked health insurance when he came to office, some 45.6 million people. It was a crisis of economic justice and pure economics: he uninsured still received care at hospitals. But the hospitals and doctors were stuck with bills they had no way to pay. Some costs were passed on to people with insurance, which was not exactly welcome.

Obama pushed a reform agenda throughout in 2009. He had substantial business support and episodic Republican cooperation.  The Patient Protection and Affordable Care Act passed the House and Senate in 2010, but with no Republican votes. It was only the second comprehensive health care law enacted in American history.

Today’s debate is unfolding in a historical period of extreme partisanship, rapid economic change and the lowest level of public trust in government ever recorded. Further, despite months — even years — of bombastic arguments, as campaign push comes to legislative shove, there is not a clear and shared sense of what Public Health Enemy #1 is.

“I don’t think there is a clear sense of what the basic problem is that the public wants to fix,” says Kaiser’s Neuman, a leading expert on Medicare and Medicaid. “Now that it seems more real, some people are getting scared, hesitant and worried about losing what they have now.”

There are already signs of cold feet. A poll released at the end of February by the Kaiser Family Foundation found that more people (48 per cent) approved of the Affordable Care Act, aka Obamacare, than disapproved (42 percent). That is the highest approval rating for the law in Kaiser poll since 2010.  Moreover, 56 per cent say they are “worried” about plans to “repeal” Obamacare.

A Kaiser poll taken in March shows that large pluralities believe the GOP/Trump proposal would result in fewer people with insurance and increased overall costs for most everyone who buys their own insurance.

Long, heated political conflicts over health care have been common over the century. Bills signed by a president, however, have not. Given that history, there is good reason to think Americans might, in the end, stick with their longstanding caution.