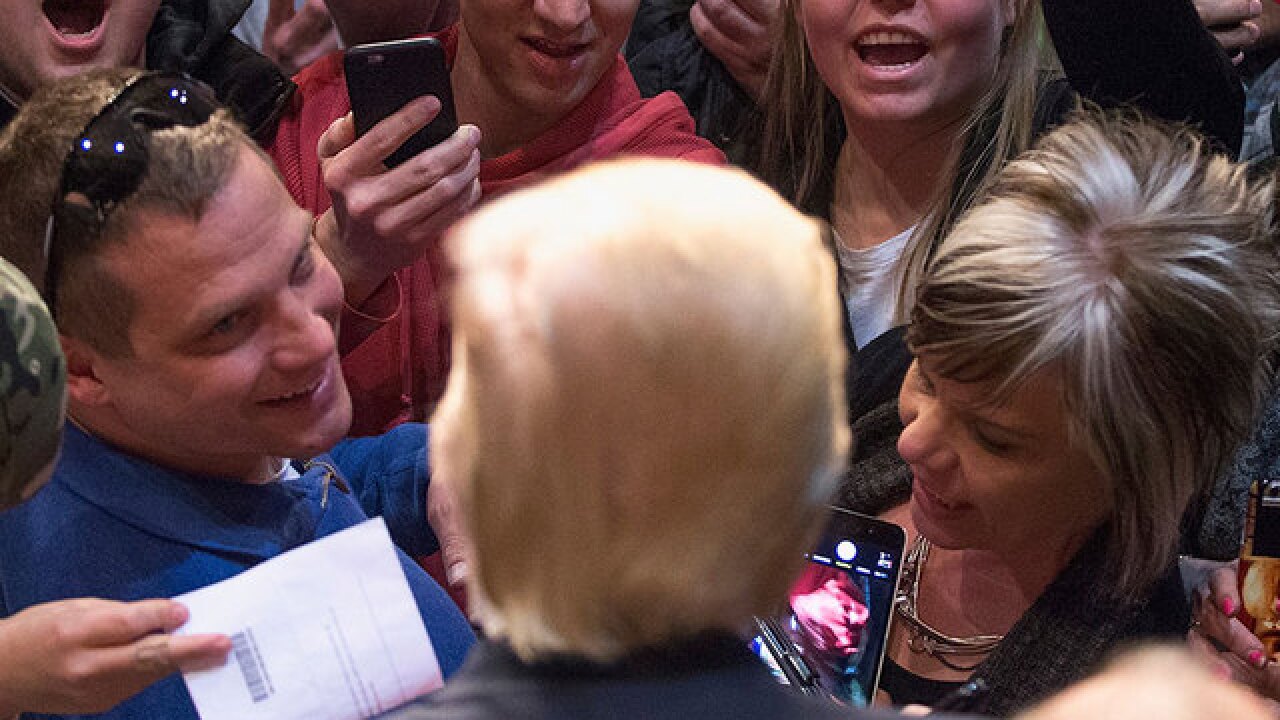 The RNC pressured the party’s presidential candidates to take a “loyalty pledge” last year, and now it’s backfiring as Democrats are using it to tie candidates in hotly contested state races to Donald Trump.

The loyalty pledge, you’ll recall, was initiated to ensure not only party loyalty but to keep Donald Trump from seeking a third-party run. Although down-ticket Republican candidates were not specifically asked to take the same pledge, many effectively did and now they can’t get far enough away from their statements – especially with the increased possibility that Trump could indeed become the party’s nominee.

If you are a Republican candidate who said at any time that you’d support the Republican frontrunner, regardless of who that might be, multiple Democratic groups representing senators, representatives and governors are trying to make sure voters don’t forget it.

“Donald Trump is a true litmus test of where you stand on a lot of important issues,” said Jared Leopold, communications director at the Democratic Governors Association. “He has driven a lot of the conversation, and I think that Republicans who are on the ballot with him will have to define where they stand on issues. I wouldn’t want to be a Republican in Vermont or New Hampshire who has to share a ballot with Trump.”

Democrats are hoping that a Trump nomination would hurt Republicans in blue or swing states such as Pennsylvania, Ohio, Wisconsin, Illinois and New Hampshire.

Trump’s national favorability ratings have remained low with a Real Clear Politics average of 30 percent compared to 63 percent unfavorable and, when stacked up against the Democratic front-runner Hillary Clinton, Clinton has consistently polled better, most recently leading Trump by 12 points.

The Democrats’ strategy is simple: If Trump’s numbers continue to stay low nationally, voters will be less inclined to vote for a senator or representative who supported the real-estate mogul in the past or supported some of Trump’s positions even if they didn’t outright commit to supporting him.

The DGA recently launched the “Gov Trump Tracker,” a website that lists each Republican running in a 2016 gubernatorial race and his or her public comments about Trump or support of the GOP frontrunner. It currently lists nine candidates in the states of North Carolina, Indiana, Missouri, New Hampshire and West Virginia as pledging to support Trump if he is the nominee.

Organizers at the Democratic Senatorial Campaign Committee have a similar effort with their “Party of Trump” initiative. The initiative includes an online political ad that ties vulnerable Senate Republicans such as New Hampshire’s Kelly Ayotte and Ohio’s Rob Portman to Trump. The loyalty pledgers even get a special name: ReTRUMPlicans.

“Republican Senate candidates helped build the ‘Party of Trump’ by refusing to stand up to Donald Trump, and now these senators and candidates are tied to the frontrunner’s toxic rhetoric and offensive comments,” DSCC national press secretary Lauren Passalacqua said in a statement. “Republicans know that Trump threatens their already fragile Senate majority, but they are unwilling and unable to do anything to stop the car from driving off the cliff with Trump at the wheel.”

Liberal leaning Super PAC American Bridge started the #PartyofTrump hashtag campaign and has been compiling a list of Republican candidates who vowed to support the front-runner. American Bridge spokesman Ben Ray says he expects that the GOP loyalty oath to be something Republican candidates in swing states will be eager to write-off or cover-up as the general looms closer.

Liberal groups are linking Republican candidates to The Donald through a number of issues. Taking a cue from national polls that suggest the majority of Americans are against delaying a Supreme Court nomination, the liberal Senate Majority PAC recently spent $220,000 on a week-long TV ad targeting Sen. Ayotte in her race against Democrat Gov. Maggie Hassan in New Hampshire. The ad said in part, “Donald Trump wants the Senate to delay filling the Supreme Court vacancy so he can choose the nominee next year. And Sen. Kelly Ayotte is right there to help.”

In North Carolina, Attorney General Roy Cooper, who is challenging sitting Gov. Pat McCrory, frequently calls his opponent’s campaign the “Trump-McCrory” ticket. Recently he launched digital ads against McCrory that proclaimed, “There’s no place for hate in NC, but does Gov. McCrory stand with everyday North Carolinians, or with Donald Trump and his shameful campaign?”

Over in the Midwest, Illinois Rep. Tammy Duckworth challenged sitting Sen. Mark Kirk in an ad that said, “We can’t let Illinois be represented by a Donald Trump twin any longer.”

Republicans have been shifting their support away from the GOP frontrunner partially thanks to a plan drafted by Sen. Majority Leader Mitch McConnell earlier this year that encouraged GOP Senators facing re-election to explicitly detach themselves from the presidential candidate, if need be. Of Trump, McConnell even told colleagues, according to the New York Times, that, “We’ll drop him like a hot rock.”

Chairman of the Senate Republican Conference, South Dakota Sen. John Thune, who also is up for re-election, has drawn distinctions between a statewide race and the national election, telling NBC, “I’ve always said that Republicans in Congress have to run their own races. You know, you’ve got to take care of your own business. It doesn’t matter what’s happening above you. Obviously that has down-ballot impacts but you can’t control that.”

But if Democrats have anything to say about it—arguing over semantics or even a Trump denouncement now, is a little too late.

“They can spend their money on whatever they’d like, the truth of the matter is there is not a enough money in Scrooge McDuck’s vault to protect them from their own words,” American Bridge spokesman Ray said. “If they didn’t agree with him, the time to start voicing concerns was years, not months, ago.”