Debate moves the needle for our undecided voters 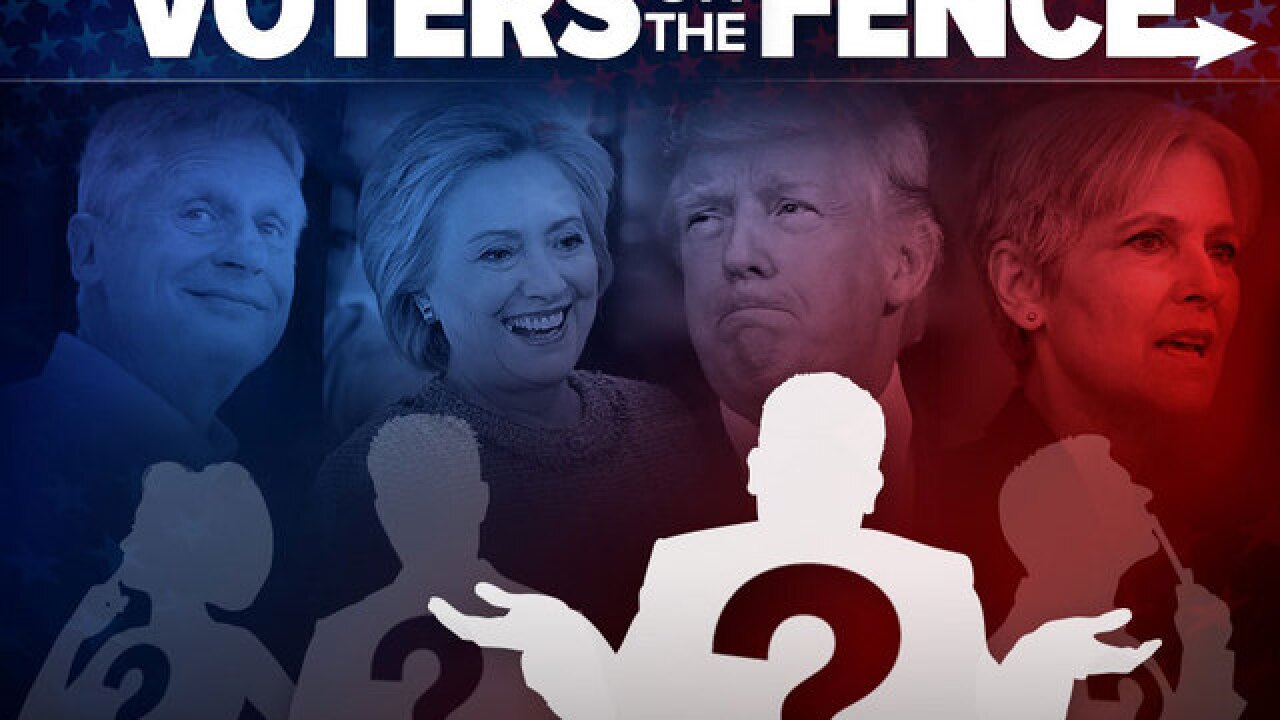 DecodeDC is following four undecided voters as part of “Voters on the Fence,” a series of stories about people who are struggling to make a decision about which  presidential candidate is right for them.

It’s too soon to know if the first presidential debate swayed many undecided voters across the country, but the spirited yet mostly civil face-off between Hillary Clinton and Donald Trump did make a difference for the four “voters on the fence” DecodeDC is following.

Three of the four said Clinton won the debate easily, with the fourth saying it was a tie. The same three — the three women in the group — said they were now moving closer to supporting Clinton and further away from Libertarian candidate Gary Johnson. Johnson was not allowed on Monday’s debate stage because he fell short of the 15 percent polling threshold set by the Commission on Presidential Debates.

“In a nutshell it was hands-down a win for Clinton in terms of Clinton being more professional and more prepared,” said Lakewood, Colo., resident Margaret Deluca, who before the debate was deciding between Clinton and Johnson. “When it came to women’s rights and Donald Trump’s record on his views on that sort of thing, she just let him dig his own grave. She just let him ramble. She really won there. He did have his moments on a few things but she was definitely more prepared when it came to things like foreign policy.”

Deluca thought Clinton’s performance was overall much stronger than Trump’s. Clinton, she said, “Exceeded my expectations in terms of how she presented herself and how well prepared she was,” while Trump “did as was expected in his fashion. I don’t think he came very prepared and he tended to play the blame game a little too much and tended to diverge from the topic.”

Deb Morrison also thought Clinton won the debate. She previously was deciding between Trump and Johnson, but she wrote Johnson off as a legitimate option before Monday night after he stuck out his tongue while answering a question during a recent MSNBC interview.

“I said I would be looking for the candidate that makes the least amount of mistakes and gaffes,” she said. “I just saw the MSNBC interview with him. I was appalled, not just with what he said but how he said it. And I said, ‘Really is this a joke to you?’ I wouldn’t even consider him.”

Now Morrison is deciding between the two front-runners, and she said the first debate left her really torn. Nevertheless, she said Clinton did the best at beating her expectations.

“I really feel like Clinton did a better job overall. She just came off for the first time as a little more likeable. The smile was a little strange, she seemed a little uneasy at first and maybe kind of hesitant, but then jumped into it,” said Morrison, who lives in Vevay, Ind. “I was surprised to see she threw the first punch. She started with the ‘Trumped up trickle down’ comment, which was really kind of funny.”

Morrison is still not sold on Clinton but says she sees how she could be a good leader.

“If you asked me who I could see being president … I just at this point don’t see Donald Trump being president,” she said. “He is the president for my greatest concerns — the economy, taxes and security — but he hasn’t shown me that he can act presidential. I think that Hillary came off as very presidential. She was believable, she was calm.”

Emily Werff of Cincinnati, Ohio, also thought Clinton did the best. She was pleased by Clinton’s ability to keep her cool and provide solid answers, while she said she considered Trump to be too reactionary, argumentative and rude. She particularly disliked how many times Trump interrupted Clinton during their individual time-slots, and she said Clinton seemed “a lot more put together than I’ve normally seen Hillary Clinton.”

Before the debate, Werff said she was leaning heavily towards Johnson, but, given Clinton’s performance, she’s now considering the Democratic nominee more.

Werff, a mother of two boys, said she was especially interested in Clinton’s comments on paid family leave.

“I had to use my vacation time and short-term disability to be able to afford to have my two children, so that’s nice to have that as something I could have,” Werff said.

She also appreciated Clinton’s apology for the email scandal, saying that she believed it to be heartfelt.

“I’m a person who likes someone who owns up to her mistakes,” she said. “I thought it was gracious of her to say she took full responsibility — that earned points with me, though I don’t think it makes up for what happened.”

Alon Sendowski of Prince Georges County, Md., was influenced by the debate, but not as much as the other three. He said he hopes the debates will help him make up his mind between Clinton and Trump, but was mostly uninspired by the first showdown. Sendowski, who wound up watching the debate surrounded by Trump supporters because it was the only watch party he could find near the airport he was flying out of in Nevada, said he thought the event was a draw.

“I mean nothing really stood out to me,” he said. “Trump looked presidential, he looked good enough for me. I was impressed with Hillary, too. She didn’t crack at any point. I think she was really solid.”

Sendowski was pleased by Trump’s restraint by not attacking Clinton or bringing up  former President Bill Clinton’s infidelities, and he said he was shocked that it seemed like Clinton herself was more on the attack.

“I didn’t really know what to expect going into it, and I think Hillary was better than I thought she was going to be. She prepared well for the debate,” he said. “Trump came off more presidential than I thought he was, but in the last 30 minutes he got weaker.”

Sendowski said he did learn things about both candidates that might sway his vote down the line. He wasn’t previously aware of Clinton’s support for the Iran nuclear deal, which he said he is firmly against. He also was surprised by how Donald Trump went after Janet Yellen, chair of the Board of Governors of the Federal Reserve System. He said he assumed Trump would want good relations with the Fed going into the presidency.

Sendowski also liked the fact that the nominee laid off his grandiose rhetoric.

“He didn’t say ‘believe me’ as many times as he would in the past. I think he only said it a few times,” he said. “But there were other parts where I think [Clinton] kind of destroyed him when they were talking about taxes at the beginning and how trickle down economics doesn’t work.”

We are interested in talking with other undecided voters, so if you think that describes you, send us an email at decodedc@scripps.com, and tell us why.