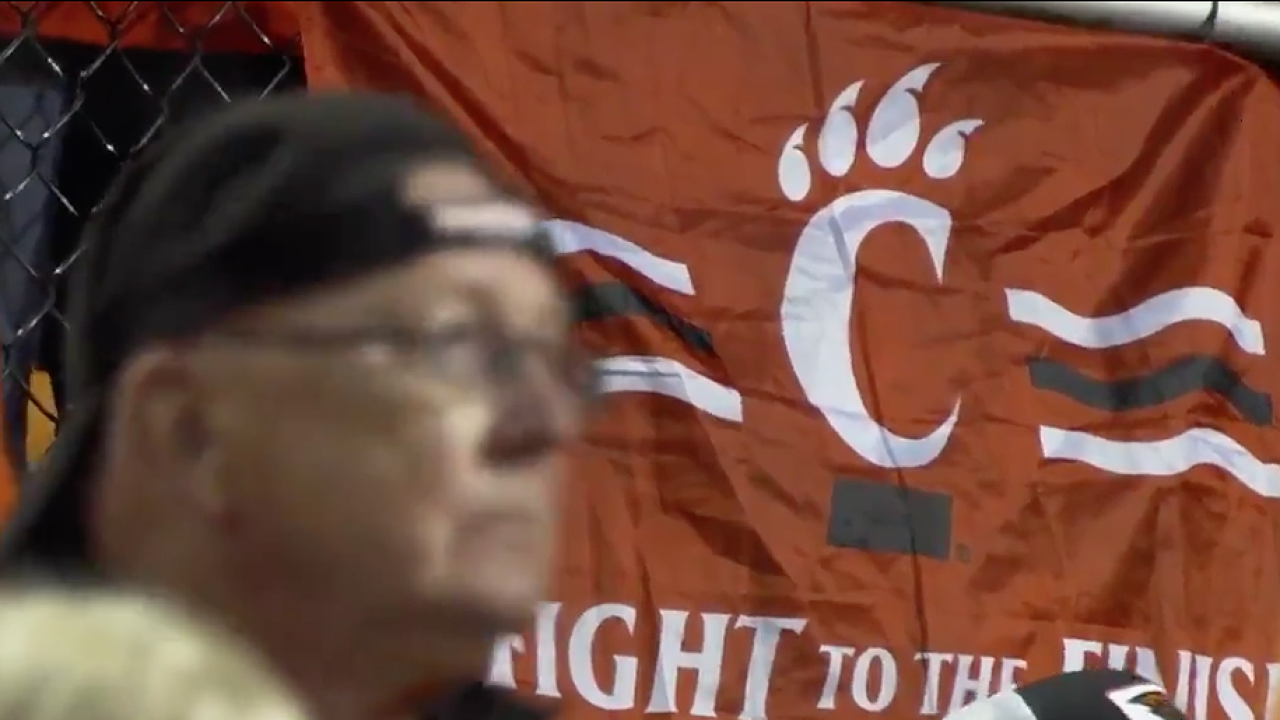 A UC baseball fan watches the Bearcats lose an NCAA Tournament game to Michigan 10-4 in Corvallis, Oregon, on June 1, 2019.

CORVALLIS, Ore. — “Walks haunt” is one of the truths of baseball, and you can bet they will haunt the UC Bearcats if they get eliminated in the first round of the NCAA baseball tournament.

UC blew a 4-1 lead when Michigan turned four walks and a hit batsman into three runs in a five-run, sixth-inning rally, and the Wolverines went on to a 10-4 rout Saturday night.

“It was self-inflicted,” said UC coach Scott Googins. “After that inning, it just spiraled out of control for us.”

If the UC-Creighton winner beats No. 3 seed Michigan, they’ll play again Monday with the winner moving on to the super regional.

In the end, UC’s chances of winning Saturday collapsed under the weight of those walks and a four-run Wolverines' rally in the eighth inning, when another walk led to a run.

The UC offense couldn’t keep up, getting only one hit and two baserunners in the last three innings.

For the game, UC hitters struck out 12 times, managed just eight hits (they had 15 in Friday’s 6-5 win over Oregon State) and walked only twice. Michigan got 12 hits, seven walks and two HBP.

Right fielder A.J. Bumpass, who went 5-for-5 Friday with a homer and a game-winning triple, was 0-for-2 Saturday with a walk and a strikeout.

Third baseman Eric Santiago was 2-for-4 with three RBI. He was 2-for-5 Friday.

Bearcats starting pitcher David Orndorff gave up a homer to the game’s very first batter, designated hitter Jordan Nwogu, but UC came back with a run in the second and three in the fifth.

In the second, Mercer doubled, advanced on a passed ball and scored when Bumpass struck out swinging and the catcher had to throw to first for the putout.

In the fifth, Santiago hit a bases-loaded double after Mercer singled and Bumpass and center fielder Jeremy Johnson walked.

Meanwhile, Orndorff shut out the Wolverines for 4 2/3 innings until the wheels came off in the sixth.

Second baseman Ako Thomas led off with a double, first baseman Jimmy Kerr homered and it was 4-3 UC. Reliever Nick Murray walked the next two batters and got the hook from Googins.

In the eighth, the Wolverines scored all four runs with two outs. AJ Kullman gave up two singles, a walk, and two more singles.

Murray took the loss and the win went to Michigan starter Jeff Criswell, who went 7 2/3 innings and struck out nine.