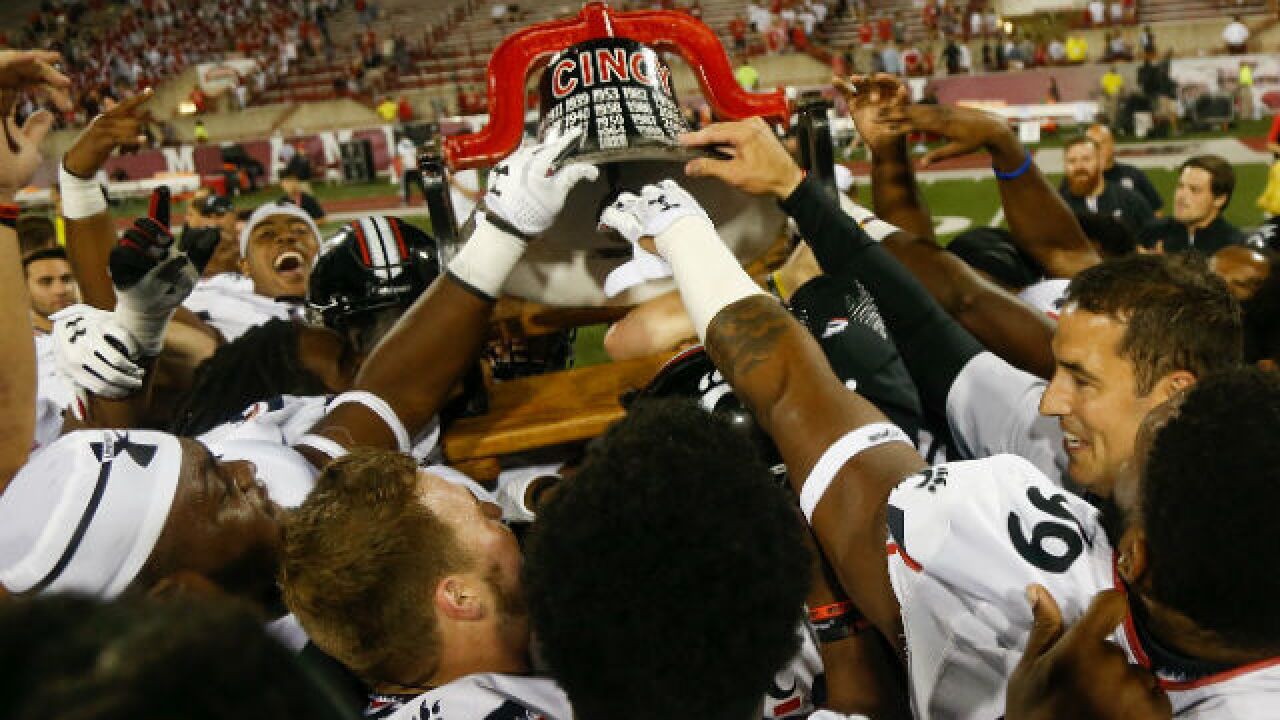 Image copyright 2017 Getty Images. All rights reserved. This material may not be published, broadcast, rewritten, or redistributed.
Michael Reaves | Getty Images
Cincinnati Bearcats celebrate with the Victory Bell after defeating the Miami Ohio Redhawks 21-17 at Yager Stadium on Sept. 16, 2017 in Oxford, Ohio. 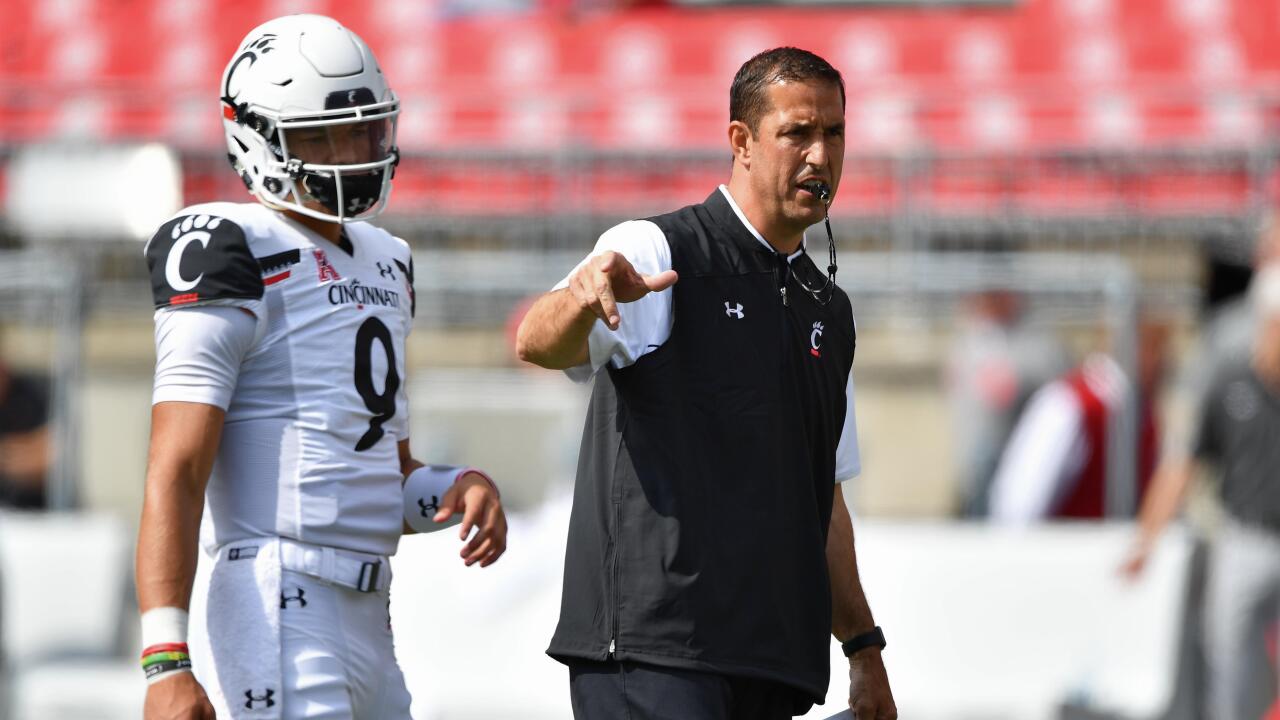 CINCINNATI — The Cincinnati Bearcats football team was eager to turn the page after Saturday’s disappointing loss at fifth-ranked Ohio State. What better way to refocus than with a rivalry game?

UC (1-1) plays host to Miami University (1-1) in the 124th Battle of the Victory Bell on Saturday at Nippert Stadium, as the Bearcats look to bounce back from a 42-0 loss to the Buckeyes.

The game, kicking off at noon on ESPNU, is the longest-running non-conference rivalry in college football and the second-oldest rivalry overall behind Wisconsin-Minnesota.

“We are very fortunate to have a rivalry game this week, which helps you get past all those other things from the week before,” UC coach Luke Fickell said. “There's no time to sit and wait and sulk. The greatest thing is we came in on Sunday knowing we get the chance to take part in the second-longest rivalry in college football history. … It's a great opportunity for us to move on, get focused on what we have to do here in the future and find a way to get better, and I think that's ultimately the most important thing.”

The history is what keeps the Bearcats excited for the rivalry, despite their recent dominance of Miami. Though the RedHawks lead the overall series 59-57-7, UC has won 13 straight games against the opponent from Oxford.

Fickell makes sure his players understand the importance of the game and what it means to the schools by toting the Victory Bell with them to camp each summer. During those nights while together at Higher Ground, the coaching staff spends time teaching the players about the history of the program and this rivalry.

One of Fickell’s biggest messages this week is that “rivalries are about respect.” The Bearcats will prepare for this game with the same respect they gave Ohio State, and if the players need any additional motivation just because they’ve won a long stretch of games against Miami, they don’t understand what a rivalry is, he said.

“We don't look at anything that happens in the past with those games, because they don't matter,” Fickell said. “I would say five of the last six games we won, we have been outplayed. This will be my third one, and last year we played well, but the year before we were completely outplayed. The three or four years previous to that, as I look back on film, we were outplayed. The reality is that's why it doesn't really matter the outcome of two years ago or four years ago or six years ago. We have to respect the rivalry.”

The seniors on the team who have won three of these games already seem to have a good grasp of that. Many of them were a part of two wins that easily could have gone the other way.

“It means a lot to us,” graduate student tight end Josiah Deguara said. “Obviously, we've had a lot of success in it, but a couple years ago, coach makes sure we don't forget, we got outplayed and we should have lost, so the fact we won however many in a row is good for us, but we respect them a lot and we're just excited. It's a big game for us that’s been played for a crazy amount of years.”

Senior linebacker Perry Young said the team tries to treat every game with the same level of importance, but the intensity is just a little bit higher in practices the week of a rivalry game. Part of his motivation is just wanting to keep the streak going and keeping the Victory Bell at UC.

“Having a 13-year streak and me coming in as a freshman and seeing all the other seniors leave with the Victory Bell, how happy they were, that means a lot,” Young said. “Me being a senior now, I want to carry on that tradition and not be that class to fail. It means a lot to our program overall.”

The Bearcats didn’t spend a lot of time reviewing the loss at Ohio State before diving right into this week’s preparations. The coaching staff picked out a few main points to learn from and then moved right on to studying Miami.

Fickell isn’t worried about regaining confidence after last week. One lopsided loss doesn’t take away the growth the Bearcats have seen the last two years under Fickell, as they went from a 4-8 record in 2017 to 11-2 with a Military Bowl win last year.

This week is another chance for UC to grow and improve.

“We definitely want to put last week behind us, not forget about it, but move on and learn from our mistakes and hopefully put on a better performance than we did Saturday,” Deguara said. “It's just about the details. Little things matter and, like last week, when you are playing a team as good as we did, those add up to big mistakes, so we are focusing on the little details and hopefully that pays off for us.”