The old Jarron Cumberland is back, perhaps just in time to salvage the season for the UC Bearcats 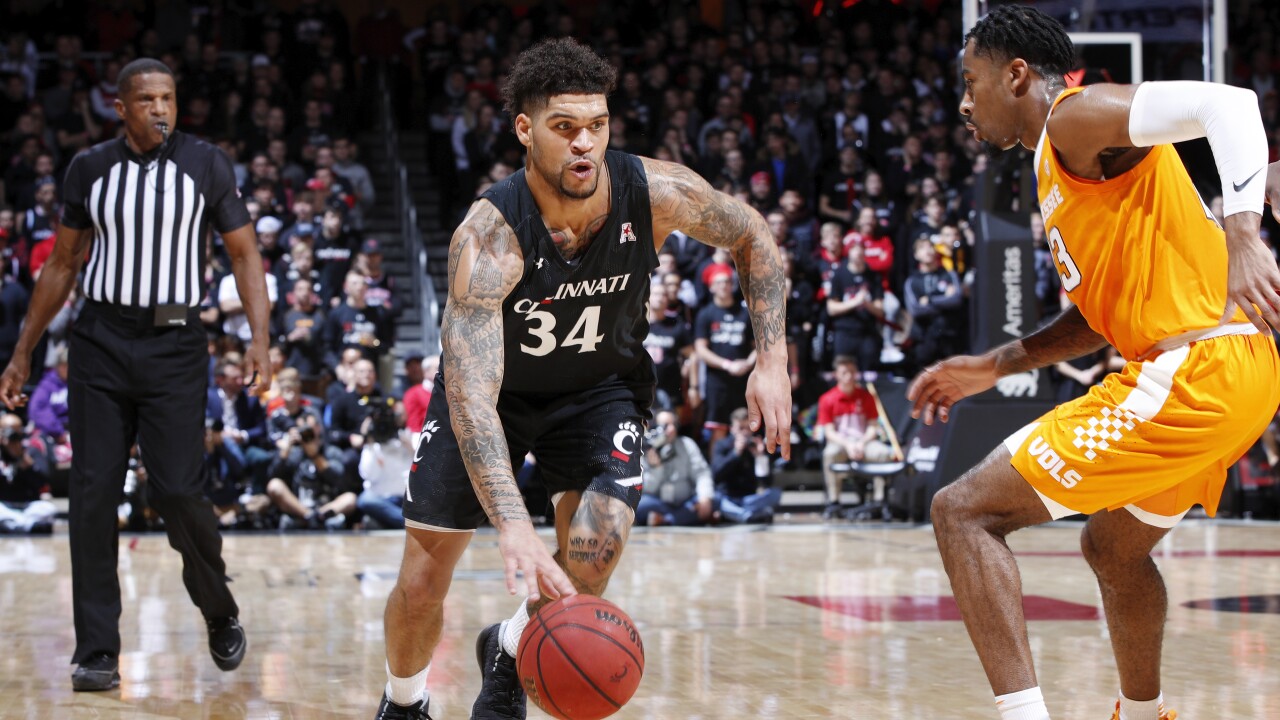 Joe Robbins | Getty Images
Jarron Cumberland of the Cincinnati Bearcats drives against Jordan Bowden of the Tennessee Volunteers in the first half of the game at Fifth Third Arena on December 18, 2019 in Cincinnati, Ohio.

CINCINNATI — To say Jarron Cumberland is back is to unfairly suggest that he went away. But for a while this season, the Bearcats guard seemed to be out of his element under first-year head coach John Brannen. That time might have passed.

The confidence. The swagger. The old Cumberland is back, perhaps just in time to salvage the season for the Bearcats.

“I didn’t coach him last year. I just know what I see now,” Brannen said. “He’s definitely healthy. A big part of him being on the ball more is he’s in great shape. He’s able to do what he’s capable of doing. Great players make the game easier for others. That’s where Jarron is right now.”

On Dec. 14, Cumberland’s poor shot selection in the waning seconds contributed to a one-point loss to Colgate. A foot injury in the preseason set Cumberland back, as did him growing accustomed to Brannen’s coaching and practicing style. But calmer waters have prevailed since, with the Bearcats star looking more like the player who, at times, took the team on his shoulders as a junior, averaging 18.8 points per game.

Cumberland scored 21 of his team-leading 22 points in the second half of an 89-82 win last week at Temple, with a team-high six assists. It was indicative of many of his performances last season, when Cumberland would take over a game with his ability to get to the free throw line.

In the win over the Owls, he scored 14 of UC’s final 16 points, including 10 from the line. On Tuesday night, Cumberland had a similar half in a 65-43 win over SMU. With the score still close in the first half, he sparked a 7-0 Bearcats run with a 3-pointer and a layup off his steal. Cumberland scored 15 points with three rebounds and two assists in the first half.

He saved the real show for the second half, when he hit four straight 3-point attempts, two from well behind the arc, to put the score out of reach. Cumberland finished with 28 points.

“It’s real fun,” Cumberland said. “Just having the crowd there to give more energy for me to feed off of. I feel way better shooting it. I’ve been shooting it off the dribble, standing still, catch and shoot. I’ve been working on my shot, everything. I feel really good. I still have little injuries. But it’s just (about getting) treatment.”

While Cumberland’s personal struggles were curious, a slow start to the season wasn’t unexpected for the Bearcats. Brannen’s style is in direct contrast to the previous 13 seasons under Mick Cronin. Add to that, five freshmen, only three returning starters, and several transfers, and a season of retooling was anticipated in Corryville. It has just been a matter of finding consistency.

After losing the Crosstown Shootout at Xavier, the Bearcats were stunned by Colgate at Fifth Third Arena before an upset win over then-No. 21 Tennessee four days later. But each time it seemed like they were turning a corner, the Bearcats would stumble. They lost to Iowa after beating the Vols, then beat UConn, then lost to Tulsa.

“I don’t know what that ceiling is (for this team), but I know that we’re starting to go in that direction,” Brannen said. “We’re connected. There’s a synergy in what we’re doing. What I’d like to see happen is our offense and defense come on the same page each game. It’s been one or the other. I told our guys we would continue to ascend as the season went on.”

Cumberland aside, there have been other Bearcats who have emerged recently. Freshman guard Mika Adams-Woods, who de-committed from Nebraska to join Brannen at UC, has seen his minutes steadily increase. His improvement on the defensive end has earned him 10 straight starts.

Seven-foot-one center Chris Vogt provided some stability after following Brannen from NKU to the Bearcats. Vogt is averaging 13 points and 6.5 rebounds.

Cumberland’s cousin, Jaevin Cumberland, who transferred from Oakland prior to this season, was shooting 35 percent from 3-point range and averaging just under 10 points.

An opportunity now exists for the Bearcats to get themselves back into the NCAA Tournament conversation. UC is No. 57 in the current NET Rankings. Upcoming opponents Houston (33), Wichita State (30) and Memphis (51) represent a chance for the Bearcats to notch quality wins.

UC hosts league leader Houston on Saturday (6 p.m.). The Cougars were tied with Tulsa atop the AAC standings this week. Last season, Houston came into Fifth Third Arena and waxed the Bearcats 85-69. Although the Bearcats exacted revenge on the Cougars in the AAC tournament, they don’t want a repeat.

“We feel really good as a team,” said junior guard Keith Williams. “We know our roles better and understanding what to do. We’re starting to trend in the right direction.”