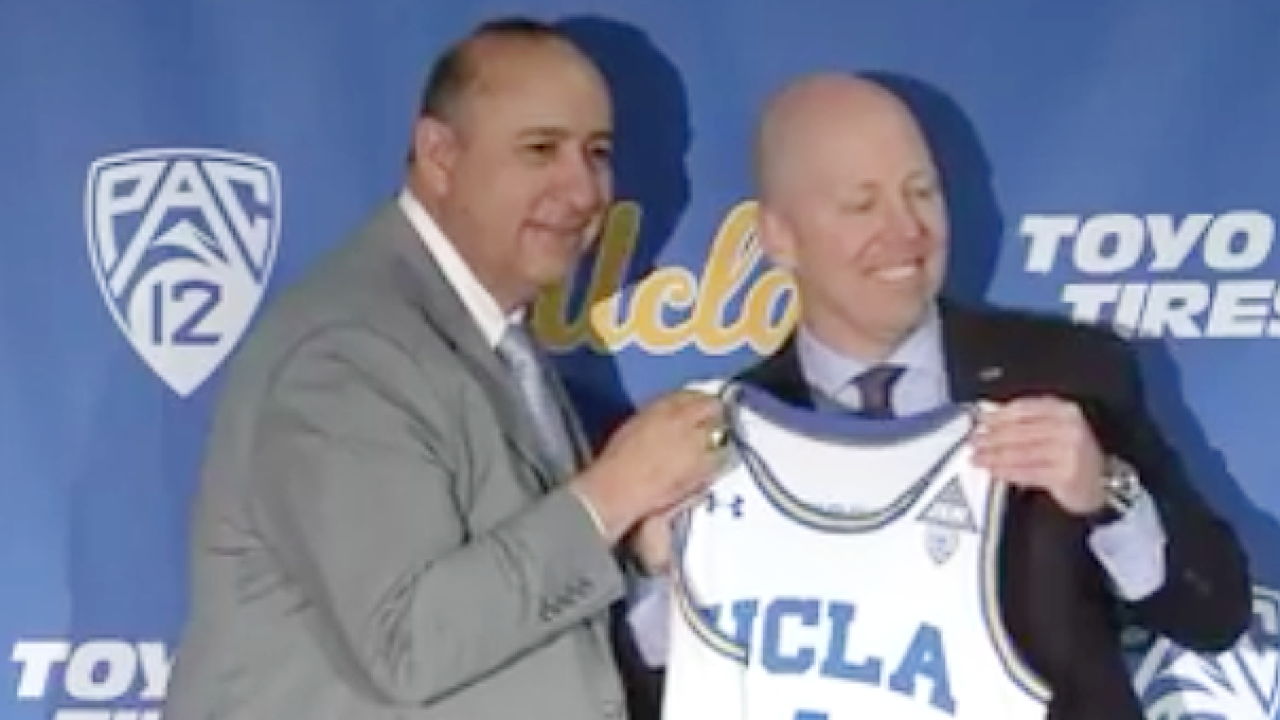 LOS ANGELES — A starstruck Mick Cronin says he dreamed of coaching in the footsteps of John Wooden and he's not afraid of the high expectations at UCLA.

“I’m here to win national championships," the longtime University of Cincinnati coach said at a Wednesday news conference introducing him as the 10th successor to Wooden's dynasty.

“I’m overwhelmed to be here, but trust me, I’m prepared,” the 47-year-old Cronin said after taking a tour of the UCLA Hall of Fame and meeting some of the great players who wore the famous UCLA jersey.

“I wouldn’t have thought I’d ever get this opportunity,” he said, invoking the names of Wooden, Kareem Abdul-Jabbar, Bill Walton, Russell Westbrook and others.

“Late at night in bed, I used to watch the Bruins play many times,” he said. “It’s a tremendous challenge, but it’s also a great opportunity – one I was never going to pass up."

Wooden has been a tough act to follow for the nine coaches who succeeded him after winning 10 national titles in 12 years (1964-1975). UCLA has won only one (1995) in the 45 years since the Wizard of Westwood retired.

But whether or not Cronin's teams ever win a national title, UCLA is counting on him to at least get the Bruins out of an 11-year slump.

After getting to the Final Four for three straight years (2006-2008), the Bruins haven’t reached the Elite Eight since 2008. In that time, they've had two second-round losses, one first-round loss and one First Four loss, and missed the tournament four times.

Under those circumstances, Cronin seemed prepared for the obvious questions.

Asked how long it would take to make progress in the Cronin Era, Cronin said the first step was getting his players to make a commitment to compete.

"It's UCLA. I understand the expectations ... The faster the better," Cronin said.

Cronin, who led UC to nine straight NCAA Tournaments since 2011, got a six-year contract worth $24 million, according to UCLA. At $4 million per year on average, that’s almost double his $2.2 million salary at UC last season. But to hear Cronin, leaving his hometown for UCLA wasn’t about the money.

"It's UCLA," he said often, as if he couldn't believe it himself. "I feel like I’ve prepared for this day for a long time."

Cronin said saying goodbye to his UC players was "the most difficult thing I've ever done in my life other than burying my mother."

He said he cried throughout the day and finally told his players, "I've got to stop. I've got to get ready for a press conference tomorrow."

Cronin endorsed his associate head coach at UC, Darren Sevino, to replace him as head coach. If that doesn't happen, Cronin indicated Sevino would join him at UCLA.

"I had to talk him into doing it," Cronin said, apparently meaning Sevino was reluctant to apply for the UC job. "He was ready to get on the plane yesterday. I had some other young guys there that will probably come as well."

Describing himself as a “players’ coach,” Cronin said he met with UCLA players before the news conference and told them his philosophy of winning.

“How you win is you play together,” Cronin said. “Together is everything. And the power of together is magnified at UCLA” because of its history.

He said he looked forward to meeting the legendary former players, too, and “uniting them for the cause.”

He said he looked forward to the day when "people don't write articles that say we're not elite.

"UCLA is elite. It has always been elite. We need to be elite on the court and obviously I believe we can do that, and that's why I'm here," Cronin said.

"Mick has built a fantastic program at Cincinnati, backed by integrity and discipline, and he has instilled an undeniable toughness in his student-athletes," UCLA Athletic Director Dan Guerrero said in a statement announcing Cronin’s hiring. "I am confident he will build this program the right way and lead UCLA basketball back to national prominence."

Despite his success at UC, the knock on Cronin was his team’s failure to get past the first weekend of the NCAA Tournament for the last seven years. His teams made the Sweet Sixteen just once (2012).

Before hiring Cronin, UCLA had a hard time finding a replacement for Steve Alford, who was fired last December. At least three coaches – Kentucky’s John Calipari, TCU’s Jamie Dixon and Tennessee’s Rick Barnes - turned down contract offers, and “a bevy of coveted coaches expressed no interest, were eliminated through the school’s vetting process or declined to be interviewed until after the Final Four," according to the Los Angeles Times.

The subject of Cronin not being UCLA's first choice did not come up in the news conference.

“We are thankful to Mick for his work over the past 13 seasons, elevating his alma mater into one of the elite programs in the nation,” Bohn said. “We wish him well at UCLA. We will begin moving forward immediately on a national search to find our next head coach.”