Primetime on national TV is nothing new for the Bearcats, as they prepare to play No. 18 UCF 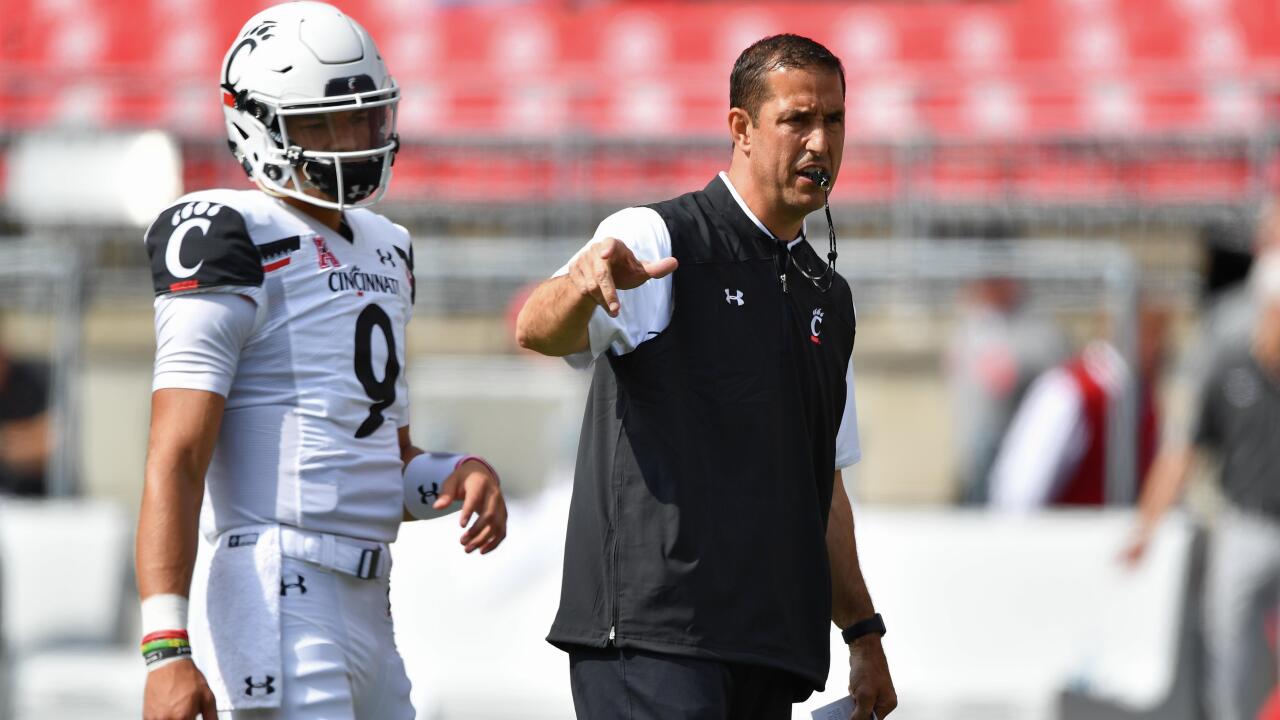 Jamie Sabau | Getty Images
Head coach Luke Fickell of the Cincinnati Bearcats watches his team warm up before a game against the Ohio State Buckeyes at Ohio Stadium on Sept. 7, 2019 in Columbus, Ohio.

CINCINNATI — Learning to win on the big stage is something Cincinnati Bearcats football coach Luke Fickell keeps coming back to, as his team continues to find opportunities to prove itself against tough competition or in spotlight situations.

This week, the Bearcats (3-1) will be facing another challenge on national television when they host No. 18-ranked Central Florida (4-1) in an ESPN-broadcasted American Athletic Conference opener Friday at Nippert Stadium.

The Golden Knights have one regular-season loss since 2016, falling by one at the University of Pittsburgh two weeks ago, and they have won three straight in the series against UC. They are the two-time defending AAC champions, and a win for the Bearcats could set them on a path to a championship of their own.

“We are always hungry to prove ourselves,” Fickell said. “I told the guys last week probably about 90% of college football is somewhere in this box, meaning talent level, all the different things. There are 5% way above and maybe 5% below. Everything else is in this box, 90%, and what it comes down to is how hungry are guys, how motivated are guys, what kind of energy and momentum are in those programs and you see the ones that start to excel. Whether that means we have to out-prove ourselves, the reality is if you're not hungry to play and compete, regardless of who it is, it makes it difficult to enjoy it.”

This is the third nationally televised game UC will play this season, and the fact that the Bearcats are getting these opportunities means something to the program, Fickell said. They opened the season with a 24-14 win over UCLA on ESPN but fell to fifth-ranked Ohio State on the road the following week on ABC.

Last year, when the Bearcats traveled to Central Florida, it was the ESPN College GameDay feature; both teams were ranked at the time. UC, then ranked No. 24, lost 38-13, and the 11th-ranked Knights went on to win their second straight AAC championship.

“Just the environment and atmosphere are the things you love about college football,” Fickell said. “And, finding a way to enjoy them as opposed to them putting more pressure on you, which in turn sometimes makes it more difficult for you to respond, is important.”

UCF brings the second-best offense in the country, averaging 568.6 yards per game and a sixth-best 49.0 points per game, but that’s nothing new this year. The Knights have been known for a fast-paced, efficient offense the past three years.

The last time Central Florida played in Cincinnati, the Bearcats struggled through a 51-23 weather-shortened loss in 2017, and they still review that film, as well as last year’s letdown loss, in preparation for the Knights. UC was 9-1 entering last year’s game and Fickell felt the big-game environment absorbed too much of the team’s focus.

The short week hopefully will help keep players more on track this time, he said, and it won’t have quite the same vibe as the game last year, which was hyped up all day long leading up to the primetime game on a Saturday night.

“If you need motivation for games like these, we are probably struggling a little bit, but, of course, we do (show the film),” Fickell said. “It's not just for motivation. We use it to learn. Learn how we handle some of the emotion things, how we handle adversity. Also, how they attacked us. They are a unique offense and a unique defense. A lot of the things they did last year that they were very successful with, I would think we will see a bunch more of it.”

UCF no longer has McKenzie Milton running its offense, as he continues to recover from a horrific leg injury that many thought would end his career. Freshman Dillon Gabriel has started four of five games and has completed 74 of 120 passes for 1,338 yards and 14 touchdowns with just two interceptions.

Fickell said the Bearcats began preparing for the tempo of the Knights’ offense over the summer because it’s too much to try to simulate in one week. Cincinnati ranks 23rd in overall defense and 15th in passing yards allowed.

“They still have their core,” Fickell said. “They are a very good running football team. Everyone talks about the bombs and shots down the field, but everything is set up because of the offensive line and their ability to run the football. They all throw a very good deep ball, which is something in their system that is very unique. Depending on who's the quarterback, they will have maybe a little bit more of a run, based on a quarterback run, but they still have the option of three different guys and they keep you off balance.”

UC is coming off a 52-14 win at Marshall, a game in which the Bearcats recorded a season-high 525 total yards of offense while rushing for 230 yards and throwing for another 295. Desmond Ridder has completed 64.3 percent of his passes for 815 yards and eight touchdowns with three interceptions, and running back Michael Warren (262 yards, four touchdowns on 61 carries) is steadily gaining momentum again after a slow start to the season.

The Knights opened up league play a week ago with a 56-21 win over UConn, and UC will be looking to snap its 19-game AAC winning streak.