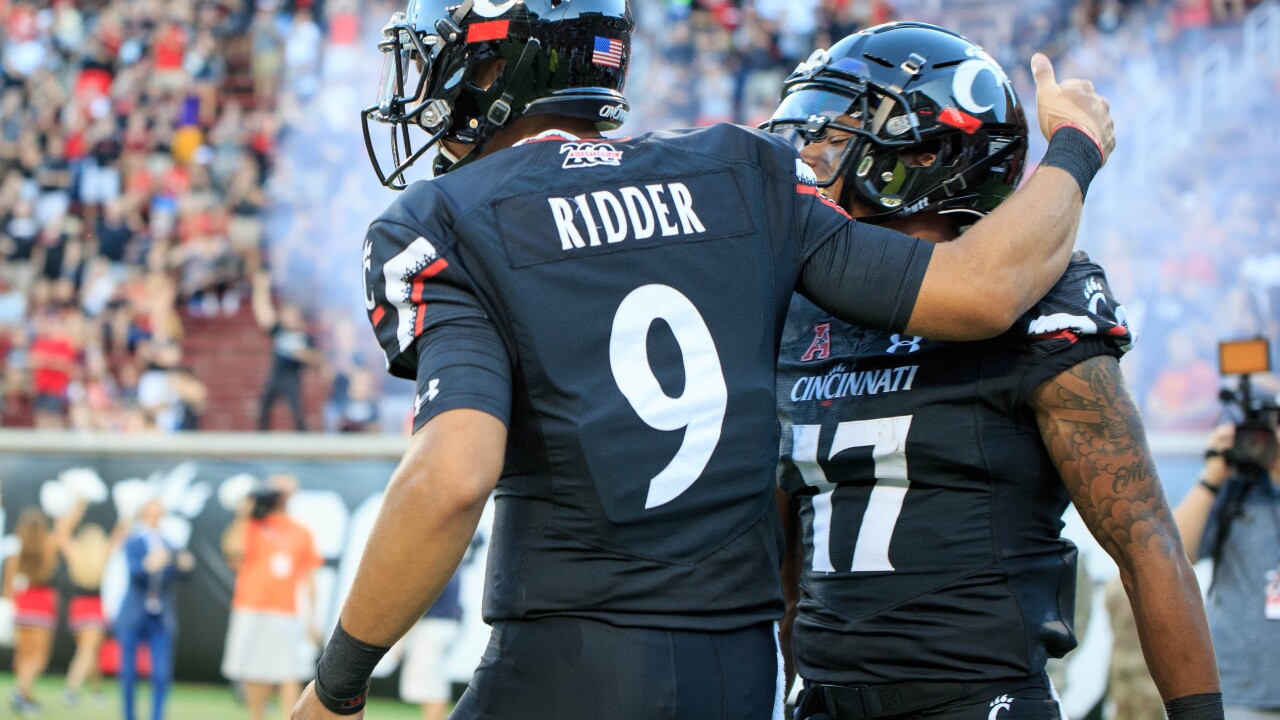 BIRMINGHAM, Ala. — Quarterback Desmond Ridder and No. 23 Cincinnati wrote a much happier ending to their season.

Ridder ran for 105 yards and three touchdowns and threw a scoring pass to lead No. 23 Cincinnati to a 38-6 victory over Boston College on Thursday in the lightning-delayed Birmingham Bowl.

It was a cathartic win for a team coming off back-to-back losses to No. 15 Memphis, including in the American Athletic Conference championship game.

They didn't have to worry about that possibility for long, dominating after the delay of about 1 1/2 hours midway through the first quarter.

The Bearcats (11-3) reached 11 wins for the second straight season and fourth in program history.

“There was a bad taste in our mouth," Cincinnati coach Luke Fickell said. “And kind of the way the night went with the weather and things like that, and the delay. There was some talk about, ‘Hey, this thing might not get off.’

“There was no way that I was going to leave Birmingham without those seniors and those guys in that locker room having an opportunity to go out there and put their hard work on display for one another. If we had to stay here 'til midnight, we would have stayed here 'til midnight, because those guys deserved that."

Ridder had two 13-yard scoring runs and a 14-yarder, setting a Cincinnati bowl record for rushing and total TDs. He had 21 carries and also passed for 95 yards with an 8-yard score to Malick Mbodj before leaving the game early in the fourth quarter.

The Eagles (6-7) were outgained 459-164 in total yards to finish a turbulent postseason. Coach Steve Addazio was fired after seven seasons and star tailback A.J. Dillon declared for the NFL draft and skipped the bowl game.

Boston College wide receivers coach Rich Gunnell led the Eagles through the bowl game, while the newly hired Jeff Hafley was on hand as a spectator after finishing his duties as Ohio State's co-defensive coordinator.

“We just didn't come out and play well,” Gunnell said. “We got our butts kicked.”

Boston College got its only points when Mike Palmer blocked a field goal and Brandon Sebastian scooped it up and returned it 67 yards in the third quarter.

Cincinnati: Was dominant on both sides of the ball. The program's only other 11-win seasons came under Brian Kelly in 2008 and 2009. The defense set up a touchdown with Ethan Tucky's forced fumble.

The weather delay brought back some memories for Boston College fans and players. They were part of a bowl game in Dallas last year that was canceled after a delay of similar length, also in the first quarter and also against a No. 23-ranked team, Boise State.

“In our guys' minds, the coaches' minds, we're like, ‘Here we go again,'" Gunnell said. “It's literally lightning strikes twice in the same place. It's weird how it all worked out."

Boston College: Already had time to start adapting to the biggest loss: Dillon. Returns most other starters to begin the Hafley era.

Cincinnati: Must replace a number of key players, including standout tight end Josiah Deguara and linebackers Perry Young and Bryan Wright. Ridder and Warren are set to return.