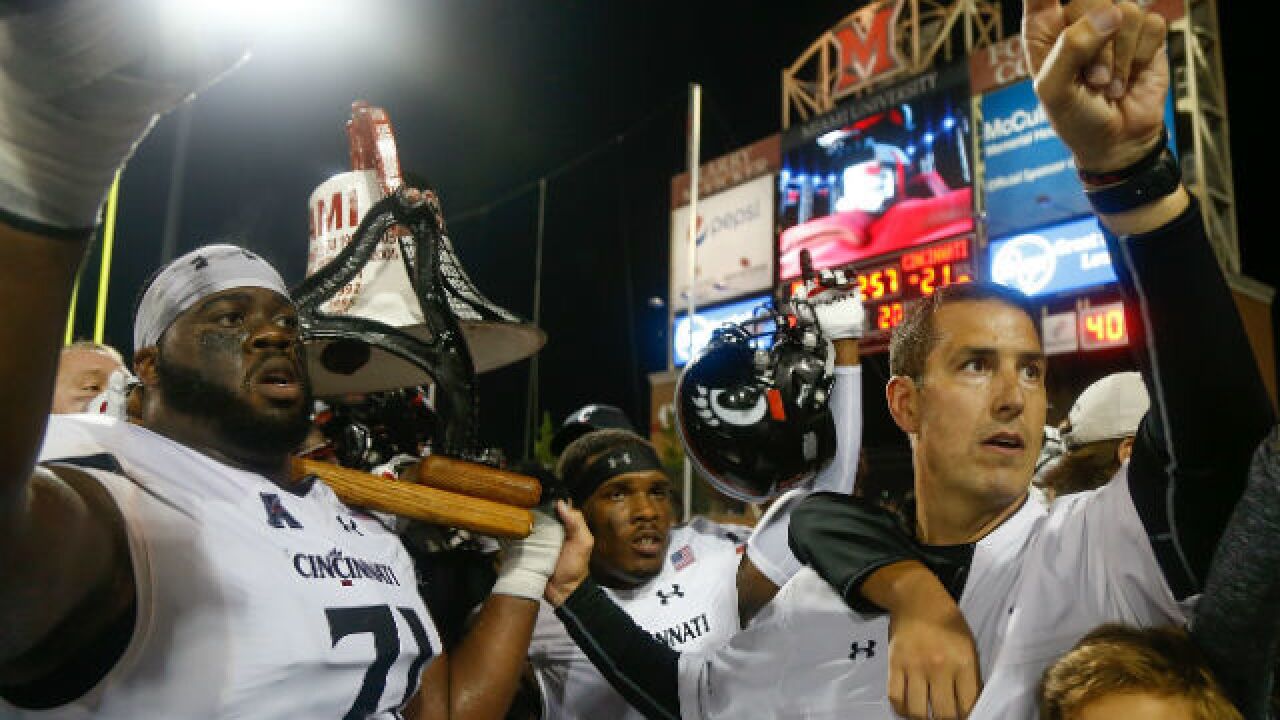 Image copyright 2017 Getty Images. All rights reserved. This material may not be published, broadcast, rewritten, or redistributed.
<p>OXFORD, OH - SEPTEMBER 16: Head coach Luke Fickell and Korey Cunningham #71 of the Cincinnati Bearcats celebrate with the Victory Bell following their 21-17 win over the Miami Ohio Redhawks at Yager Stadium on September 16, 2017 in Oxford, Ohio. (Photo by Michael Reaves/Getty Images)</p>

CINCINNATI — Cincinnati Bearcats football coach Luke Fickell said he was pleased to see the momentum from last year’s success carry through to the offseason, but as the start of the new season rolls in, he has one important message for his players: “Be in the now.”

The Bearcats went from a 4-8 finish in Fickell’s first season in 2017 to an 11-2 record last year, including a 35-31 win over Virginia Tech in the Military Bowl.

Fickell, of course, wants to see the program continue building and trending upward, but the belief UC can do so cannot be based on anything that happened last season, he said. The Bearcats will open their season with a primetime game at 7 p.m. Thursday against UCLA at Nippert Stadium.

“We learned a lot of things, but being able to be in the now and be in the moment, I think, is big,” Fickell said during the American Athletic Conference coaches’ call with media Monday. “A lot of these guys, myself included since being here, haven't had a whole lot of things to talk about and be excited about, and last year we did. We created some energy and things like that. It was great throughout the entire offseason and summer and camp, but now we need to make sure we're in the moment.

“That was then and this is now. We are going to play on some big stages, particularly these first three or four, five, six weeks are going to be really big stages if we do our job. So it's key for us, as much as we want to celebrate and as much as the momentum that we used from last year, now we need to get back in this moment and realize from last year what it was we did to give us those opportunities. I think that's the unique thing about each season is where is the focus and what do we need to make sure we are addressing with our team every day.”

UC has a good foundation to build on after returning seven starters on both sides of the ball. Several young players were key contributors last year and should be again in 2019.

“We're waiting to see where we really are,” Fickell said. “We have some ideas, and sometimes as a coach, in my mind I know some of the things we really have to shore up. When it's mixed with anxiety and things like that, the first game is always the most difficult.”

The Bearcats will find out pretty early what kind of team they’ve got. After playing UCLA, they will travel to Ohio State. They open the conference schedule Oct. 4 against defending champion Central Florida.

Cincinnati opened at UCLA last year and surprised with a win against a Power 6 conference opponent in a big atmosphere like the Rose Bowl. That proved to be a huge momentum builder for the Bearcats, while the Bruins went on to a 3-9 finish in Chip Kelly’s first season.

Fickell remembers the curiosity he carried into that game, wondering how players who appeared up to the task in practices would perform under the lights. This year is no different, he said, except it’s an opportunity to gain some attention on a national stage while playing in the comfort of Nippert Stadium.

“To have it at home, to have a Thursday night spotlight game, you've got to give a lot of credit to our athletic department for getting this done and giving us this opportunity to play,” Fickell said. “Coming off a good year with some momentum and energy, I'm excited to see what Nippert Stadium is really like.”

The opportunity isn’t just important for the program. It’s another chance for the AAC to earn some credibility.

“I definitely want to take care of ourselves and the program, but also the league,” Fickell said. “Sometimes you've got to do this. Sometimes there's some great competition in the league, and to be honest, we beat each other up and sometimes not enough people recognize it. For us and our league and all the teams of our league, to have these non-conference games and showcase ourselves and our conference, they are big. They are not just big for us. We try as a program not to take them differently, but the reality is what it does for our conference and making sure college football understands what is going on in AAC football.”