As No. 17 Bearcats prep for Temple, seniors reflect on their journey from back-to-back 4-win seasons 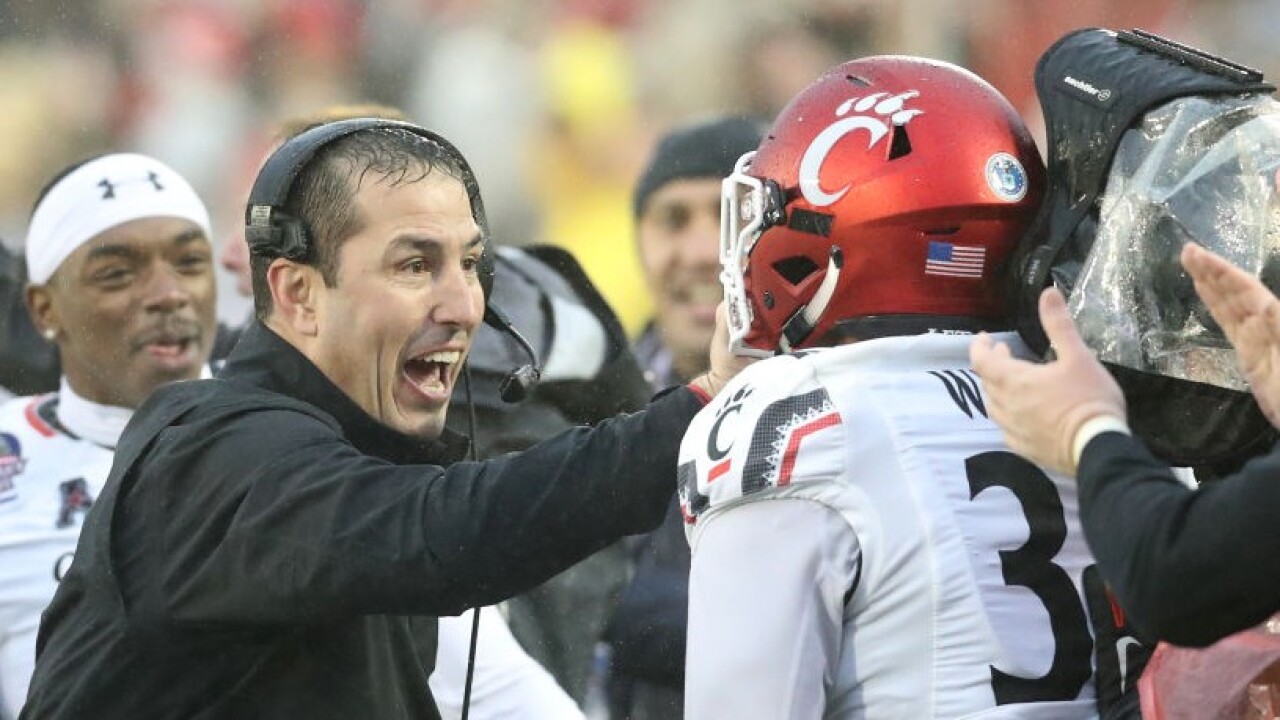 CINCINNATI — The seniors on the University of Cincinnati football team have been doing a little reflecting as they approach their “Senior Day” game Saturday against Temple. They don’t have to look too far back to see how far they’ve come.

For those who have been on the roster since Tommy Tuberville’s last days in Cincinnati, this senior class experienced back-to-back four-win seasons before the program made a complete turnaround last year. UC finished 11-2 with a Military Bowl victory in Fickell’s second season, and now the No. 17-ranked Bearcats (9-1, 6-0 American Athletic Conference) have a chance to secure a place in the AAC title game with a win Saturday.

Cincinnati hasn’t won a conference title since 2014, the last year before The American began playing a championship game.

“I've just been able to talk with some of the seniors this week, just kind of talking about how far we've come as a program and as players and a team,” senior tight end Josiah Deguara said. “It's been a crazy journey, just super blessed to be in this position. Obviously, it's been a special season so far, so we hope to continue with that and leave our legacy with kind of the last game being at the Nipp, making it something special.”

Third-year coach Luke Fickell deserves credit for altering the course of the team.

The former Ohio State University defensive coordinator replaced Tuberville in December 2016 and immediately emphasized the need to change the culture of the program. Fickell challenged the team daily in practices and players bought in, he said. Even with one of the youngest rosters in the nation last year, the Bearcats reaped the rewards and they are still paying dividends now. Fickell was the AAC Coach of the Year last year.

“Ever since he came in, he's been an amazing coach, but also just an amazing guy,” Deguara said. “His door is always open. That's something he always prides himself on, and it's awesome just being a player on this team and knowing your head coach is a guy you can always come to if you need anything.

Deguara said there wasn’t one specific thing that Fickell did to make a difference, but after pushing players to their limits the first year, he backed up his demands with more of a relational approach the next season.

That’s what made players want to keep working for Fickell, and they still do.

“I've always been a big fan of Coach Fick even before I came to Cincy,” said senior kicker Sam Crosa, who transferred from Western Illinois this year but followed Fickell as a Columbus resident growing up. “His passion for the game. I saw him at Ohio State. He actually came to one of my practices in high school when I was a senior, looking at one of our other players, and I just remember seeing him and hearing about him. I knew he was a really good coach and good guy, too.”

Fickell has grown more comfortable in his role as a head coach, his first full-time after serving as interim head coach for the Buckeyes in 2011 when Jim Tressel was suspended and eventually resigned.

The relationship aspect has been the key for him, he said. He’s developed so much confidence in his players that he even allows them to voice their opinions on plays to run – like the one that led to Wil Huber’s blocked punt at USF last week – and trusts them to relay information he needs to know regarding their personal health.

“I think our ability to rely on the kids a little more has really improved,” Fickell said when asked how he’s grown as a coach. “Whether you are a first-year head coach or at a new program, you don't know the people around you as well, and I think it's really difficult to make some of the decisions, like giving a guy freedom to say when he can and can't go. You don't always do that, but as you get deeper in the program, the way we do things, the better relationships you have with guys, the more you can be honest with them and the more they can be honest with you. You can read a lot more things, so your ability to maintain a consistency as a coach and a program allows everybody to grow. That's what happens when you have time, not just with the program, but the relationships you grow.”

Winning helps, too. But it’s the Bearcats’ recent success that has many speculating Fickell will be called with job offers at bigger programs.

Deguara hasn’t seen any signs that that's been on Fickell’s mind, but regardless of whether he stays or goes, the Bearcats have been set up for future success with several underclassmen contributors at key spots.

“It's bright,” Deguara said. “We are a super young team. We've got young guys making plays every week, whether it's defense or offense, we've got young guys performing at a really high level. This year we've had a great year, but I think it's just the beginning for what this team can do.”