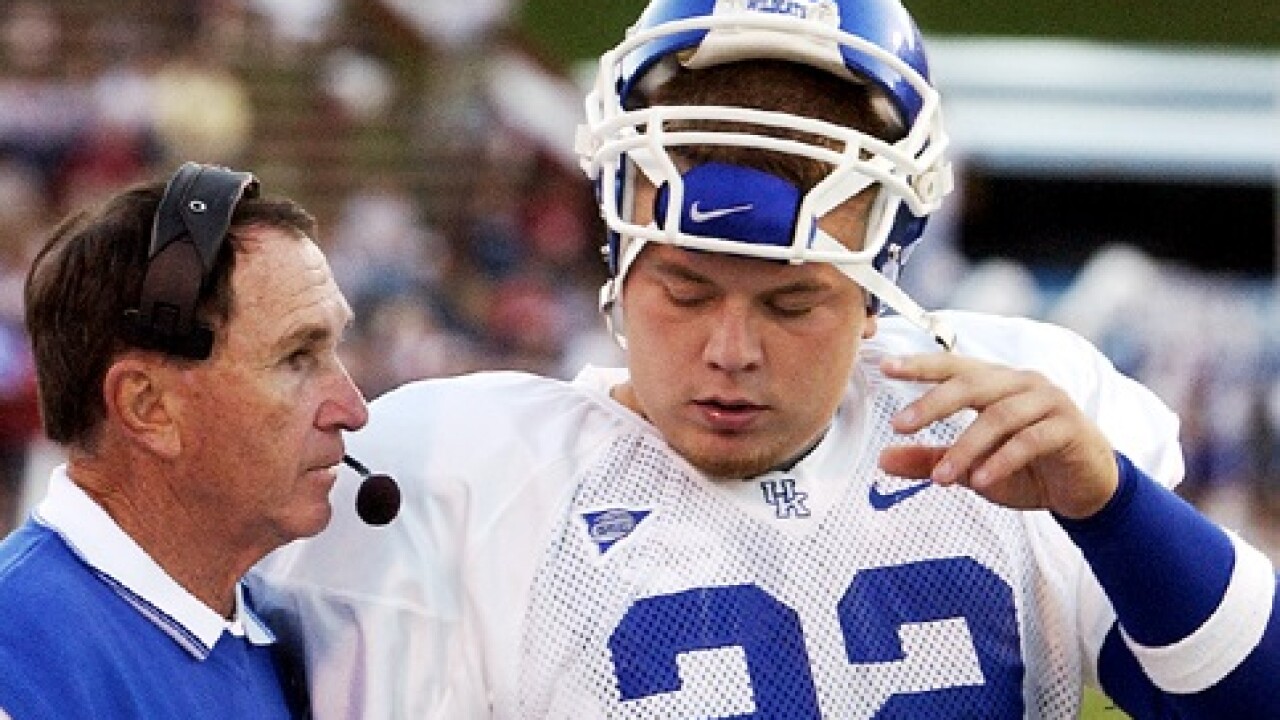 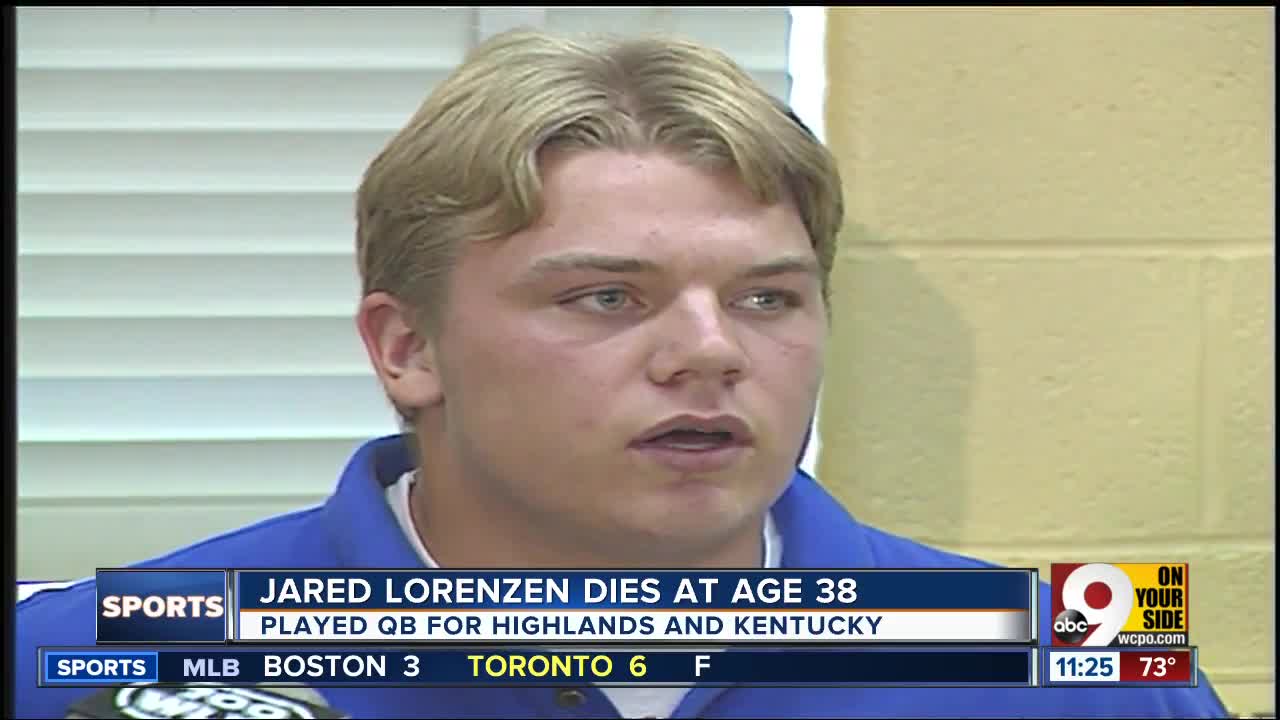 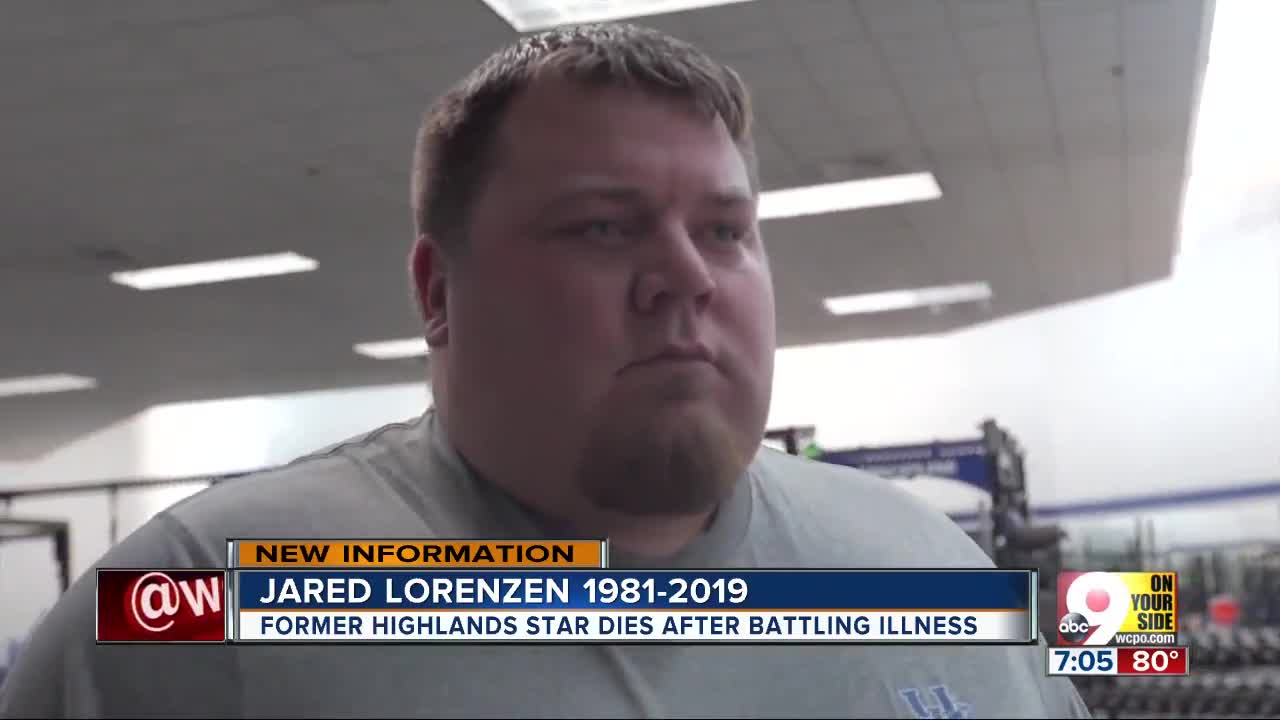 Jared Lorenzen was a Northern Kentucky high school football legend who became a national and Internet sensation with his giant girth and warm, engaging sense of humor.

So it was a sad day when the former Highlands High School and University of Kentucky quarterback died Wednesday at the age of 38.

"I lost my sweet boy today after a long, hard fight," his mother texted to a friend.

Known affectionately as the "Hefty Lefty" and the "Pillsbury Throwboy" in his college and pro quarterbacking days, Lorenzen had been hospitalized with kidney and heart issues and an infection. He struggled with his weight literally his whole life - he was 13 pounds, 3 ounces at birth - even through four thrilling seasons at UK, four with the NFL New York Giants and later with an indoor league team called the Northern Kentucky River Monsters when he was 320 pounds.

After his playing days, Lorenzen weighed as much as 502.

After joking about his weight for years, Lorenzen made up his mind to lose it in 2017 and started the "Jared Lorenzen Project" on Facebook, where he chronicled his weight loss journey.

WATCH Lorenzen in this 2017 video:

Lorenzen invited the public on "Wednesday Walks With Jared" and recently returned to Lexington and joined the "Now Let's Get Fit" organization to help kids make healthy lifestyle choices.

"I just want people to know there is something better out there that will make you feel better about yourself and going out and being out,” Lorenzen told Lexington TV station WLEX.

Heartbreaking to hear the news that Jared Lorenzen has died. Wonderful guy, such a good athlete with a big arm and nimble feet. Sat with us a few times on Sports of All Sorts. He was only 38.@WCPO

RELATED: Where are they now? Catching up with former UK, Highlands football star Jared Lorenzen

Matt Jones, founder of Kentucky Sports Radio, had been in contact with Lorenzen's family and tweeted this statement from them. Lorenzen leaves a daughter and a son.

Here is a statement from the family of Jared Lorenzen pic.twitter.com/vTJn2gdNU5


A statement from the Fort Thomas Independent School district expressed sympathy for Lorenzen's family and said Lorenzen will be inducted into Highlands' Athletic Hall of Fame this fall, in his first year of eligibility.

"This is a big loss for our school and community,” said Highlands Principal Matt Bertasso. “Jared represented Highlands with skill, grace and professionalism from his time at here and into college and professional career. He’ll always be a Bluebird.”

“We’re shocked and saddened by the loss of one of our most distinguished alumni. Jared was an incredible talent and better person. Our thoughts and prayers are with his family and children, Taylar and Tayden,” said Athletic Director Kevin Nieporte. “Our school and community will always be here for you.”

Lorenzen was a larger-than-life figure in Northern Kentucky, quarterbacking Highlands to two state titles. As a junior, he passed for a Northern Kentucky-record 2,759 yards and 37 touchdowns in 13 games. In his senior year, he topped that.

In his senior season (‘98) at Highlands, Jared Lorenzen completed one of the greatest seasons of any QB to have ever played in Kentucky.

Lorenzen then quarterbacked the UK Wildcats for four seasons, breaking school records in passing yards, passing touchdowns and total offense. He wasn't chosen in the 2004 NFL draft but the Giants signed him. He played in only four games and mostly was a backup to Eli Manning but he earned a Super Bowl ring in 2008.

Thanks for the memories, J Lo. #22 pic.twitter.com/5gmEe3Bq4p

The 6-4 Lorenzen had a colorful personality as big as his frame and became popular on Twitter with more than 50,000 followers.

Lorenzen's last game was in 2014 with the River Monsters in the now-defunct Continental Indoor Football League. The team wore yellowish green jerseys designed to look like a scaly sea creature, and Lorenzen's belly bulge emphasized the effect. Lorenzen became an Internet sensation in the season opener due to his surprising agility at 320 pounds.

The buzz ended soon after when an Erie Explosion defender tackled Lorenzen low and knocked him down hard on the concrete-like playing surface of what's now BB&T Arena. The impact left Lorenzen with a broken right tibia.

"It was a nice, clean hit. I just didn't get low enough," Lorenzen said.

Doctors inserted a plate and six screws in his leg and repaired ligament damage in his foot. Lying in his hospital bed two days after surgery, the aging football star made a decision. His playing days were over.

"My daughter (Taylar) was getting me a Gatorade and I decided, 'I'm done.' I took a little personal inventory and I'd said I'd play until I got hurt. I was very, very lucky to not get hurt until I was 30 years old trying to still play. It was time to stop."

When his NFL prospects dried up in 2008, Lorenzen embarked on managerial stints with indoor football league teams. He quit those roles in order to play.

In a WCPO.com interview in 2017, Lorenzen said he was still amazed by his circuitous journey.

Would he change anything? Make a different decision that would have altered his career?

Never, Lorenzen said. He has so many good memories.

"I'm a freshman, 18 years old, and I throw for 528 (yards) against Georgia, which is one of the best defenses in the country at the time," Lorenzen said. "And then you get to the NFL and within three years, all of a sudden you're in the Super Bowl and playing against an undefeated Tom Brady. It's like, 'What in the world is going on?' And then literally three years later, I'm playing in an Arena (Football) game in Eastern Kentucky. It's just a bizarre, bizarre way it went, but I think it was awesome."

Two years ago, Lorenzen was working in sales. He was an HVAC and plumbing manufacturing rep for HBB Pro Sales Group, and his territory spanned the state of Kentucky. Not surprisingly, many of his clients liked to talk Kentucky football. And it was always interesting in Louisville, Lorenzen said, laughing.

"Those guys have been good, and I give them pretty good grief," Lorenzen said.

Lorenzen also had a retail business. He and two partners started ThrowboyTees.com, a riff on his "Pillsbury Throwboy" nickname. The shirts had regional relevance, from "That's so Bullitt County" T-shirts to "Make Cincinnati Great Again" ball caps.

One of the most popular products was a T-shirt that said "Man Crush Everyday" with a picture of Kentucky basketball coach John Calipari. Another fan favorite was the shirt with images of the state of Kentucky, scissors and a basketball net.

Lorenzen said the company tried not to push the envelope too far, on behalf of kids who might be surfing online. And if there's one lesson he learned in the apparel biz, it was that hot ideas don't always translate to hot sales.

"You think some shirt will absolutely kill it and we'll sell two shirts. And then something that says 'Puke' instead of 'Duke' will sell 50 shirts. It's like, 'What in the world?' You make them and see what happens," Lorenzen said.

When he wasn't working, Lorenzen helped coach his son's football team. He said he wanted to be involved at the high school level, but he never got the chance.