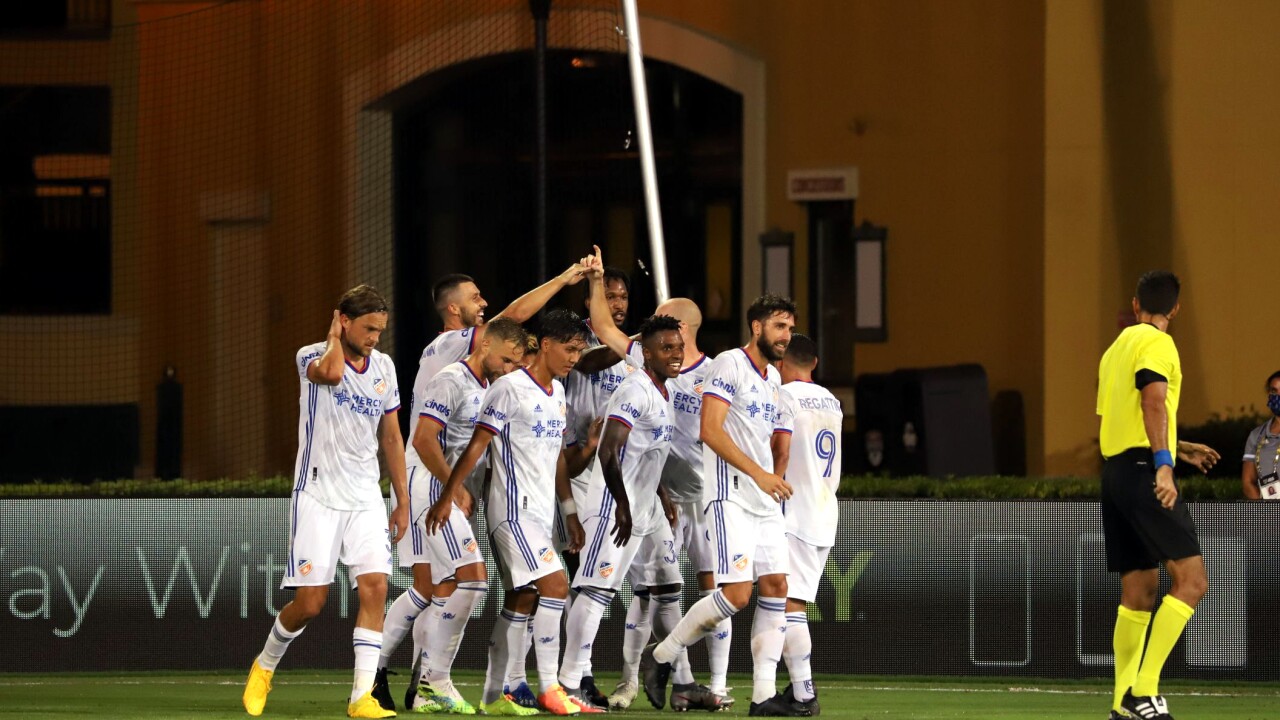 KISSIMMEE, Fla. — FC Cincinnati came into the MLS is Back Tournament with few expectations. New coach Jaap Stam was even calling it more like a preseason for the team he joined in person just one month earlier, and a lopsided loss to open the tournament only affirmed that.

But, two much improved performances later, FCC is headed to the knockout stage.

The Orange and Blue topped New York Red Bulls 2-0 in their Group E finale Wednesday night at ESPN Wide World of Sports to advance to the Round of 16, where they will meet the Group F winner. That game will take place 10:30 p.m. July 28 against either Portland or Los Angeles FC.

Here are three takeaways from the win:

FC Cincinnati switched to a more defensive approach with the 5-3-2 formation ahead of last week’s 1-0 win over Atlanta, and it was no surprise Stam didn’t veer from that against a New York team known for an effective high press and counter attack.

Once again it paid off, as FCC earned a second straight clean sheet after giving up four goals in the tournament opener against Columbus on July 11.

“We needed to give everything defending wise as well to not give away too many chances or open chances and then to wait for the opportunity ourselves to come out and be decisive and score that goal,” Stam said. “And that's what we've done twice, which was very good.”

The Orange and Blue “parked the bus” defensively, so to speak, and New York couldn’t solve it even while possessing the ball 68 percent of the game with a lineup featuring six midfielders and no natural forwards (midfielders Daniel Royer and Florian Valot played as the front men). The Red Bulls tried going through FCC’s defense in the first half unsuccessfully and then shifted to trying to go above the center backs. They finished with 44 crosses and 18 shots but only four on target as 13 were blocked. FCC won 57 of 102 duels (56 percent).

Goalie Przemyslaw Tyton recorded all four saves in the final 10-plus minutes, three within a three-minute span.

“We worked really hard last weeks to know how to defend other teams,” Tyton said. “And we did it this day and last time. Well, I think we did a good job. I feel confident with my defenders. We didn't give up anything. ... We stuck to the plan, we won the game and we are happy we're gonna go to the next round.”

While the defense has shined in the two wins, FCC showed some progress on offense Wednesday as well.

FCC moved forward with Andrew Gutman and Joe Gyau playing deep as wingbacks for a second straight game, and usually only two or three players were involved in the attack at any one moment. Despite that, the Orange and Blue still managed two goals and looked more threatening for the most part, including a ripped shot from outside the box by Frankie Amaya that was saved in the 19th minute and an Adrien Regattin shot just wide in the 52nd minute.

New York lacked the pressure its defense has been known for, and FCC took advantage of two mistakes to get on the board. In the 43rd minute, Yuya Kubo pounced on a poor clearance by Red Bulls defender Amro Tarek, took a couple touches and then fired off a shot from outside the box past a diving David Jensen for a 1-0 lead. Then in the second half, in the 56th minute, Haris Medunjanin’s corner kick to the near post was deflected off the head of Valot and Jensen couldn’t react quickly enough, as the ball went off his gloves and into the goal.

Kubo’s goal, though, was not just a stroke of good fortune being in the right place at the right time. FCC had put together an incredible possession that saw ball movement from Adrien Regattin and Joe Gyau on the right side, back to Deplagne and eventually over to Andrew Gutman, who sent the ball forward and essentially earned a hockey assist.

Medunjanin’s corner came after a great run and cross that was cleared out of bounds.

“The key is working together,” Stam said. “If you have players and you have only individuals then you're never going to win the game. So you need to have cohesion between the players in the team within the roster and not only the 11 that are playing, but everybody within the roster needs to understand the plan and needs to be ready to do their part in doing that as well. That's what's very important I think for this team at the moment, and there's a lot of ability in there as well, and eventually, you know, getting the (injured players back), we can grow from this and then become even better defending wise but also going forward to be more dominant.”

Both wins came against the two teams that beat FCC in March before COVID-19 shut down the season for four months, and Group E was considered one of the toughest in the tournament. Columbus remains unbeaten this season after improving its roster greatly during the offseason, and New York and Atlanta have been strong the last few years.

FCC was an underdog in the group and certainly a surprise runner-up, although a draw would have gotten the Orange and Blue into the knockout stage as a wild card third-place finisher.

“At the beginning of the tournament, nobody gave us a chance, so we proved them wrong,” Medunjanin said. “We showed the league that we are a good team, especially when we fight each other because in our team we don't have like a star player like others. We need to do it as a team. And that's what we did today, and we show that we can play with any team in the league.”

Cincinnati learned quickly from the loss to Columbus, and Stam showed he can out-coach managers more familiar with the league. His tactics were key, especially considering injuries limiting the attack with forward Jurgen Locadia out all three games with a quad injury and Allan Cruz (ankle) and Siem de Jong (groin) limited as well.

The Orange and Blue hadn’t put together two wins since March 2019.

“It gives us confidence to go on and go to the next phase,” Stam said. “If you look at the table, it gives us six points, which is very positive. In the process that we're in, we're still in like a sort of in a preseason, in week four (together). Already against these two very big teams, very good opponents, getting this success, tells you something about this team as well as the mentality that's been there."