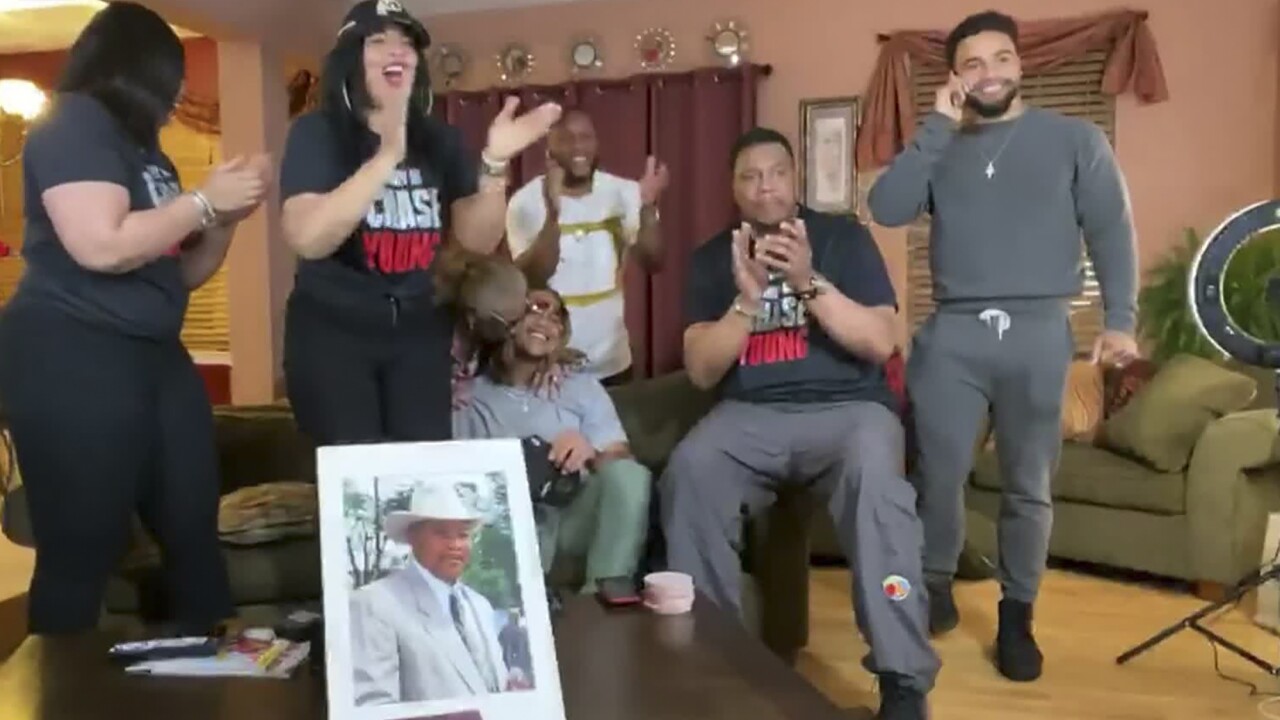 (Copyright 2020 The Associated Press. All rights reserved. This material may not be published, broadcast, rewritten or redistributed.)
AP
In this still image from video provided by the NFL, Chase Young, seated in center, talks on his cellphone during the NFL football draft Thursday, April 23, 2020. Young was drafted second by the Washington Redskins. (NFL via AP)

WASHINGTON — Chase Young finished his junior season at Ohio State figuring he had done what it takes to become a top pick in the NFL draft.

“I feel like I’m the best player in this draft,” the fearsome pass-rusher said after being taken by the Washington Redskins with the second overall pick Thursday night. “What I bring to the table and how I prepare, I definitely believe I’ll make a pretty big impact on the field.”

This marks the first time in NFL draft history that the first three picks were teammates in college at one time: Joe Burrow, Chase Young and Jeffrey Okudah were all at Ohio State together.

Young was widely considered the best non-QB in the draft and could have the kind of impact on the Redskins that 2019 No. 2 pick and his former Ohio State teammate Nick Bosa did for the San Francisco 49ers. After leading the nation with 16 1/2 sacks and making 46 tackles last season, Young appears to have that potential, and Redskins vice president of player personnel Kyle Smith said “everything” stands out about him.

The Redskins fielded calls in recent weeks from teams interested in trading up, but wound up standing pat. Similarly, they watched as several potential trading partners interested in Trent Williams took offensive linemen in the first round, reducing the pool of destinations for the disgruntled left tackle.

New coach Ron Rivera believes a top-five pick needs to provide an immediate impact, and the Redskins went with the best player available rather than addressing a major need. They already have Ryan Kerrigan and 2019 first-rounder Montez Sweat as part of their pass rush and spent 2017 and 2018 first-round picks on defensive linemen Jonathan Allen and Daron Payne.

“We’re definitely going to have a great D-line, full of first-rounders,” Young said. “Me just coming in, I’m going to be a sponge.”

After taking the call from Rivera, Young went outside his Maryland home to address friends and supporters standing in the rain. Despite that support, he said he doesn’t consider playing for his hometown team a source of pressure.

“It just gives me a lot of motivation,” Young said.

The DeMatha Catholic High School product on Wednesday delivered meals to 300 nurses at Southern Maryland Hospital in Clinton, where he was born 21 years ago. He grew up in Upper Marlboro, 10 miles from his new home stadium.

Young also has a college connection to the two biggest pieces of the Redskins offense. He played with quarterback Dwayne Haskins and receiver Terry McLaurin at Ohio State in 2017 and 2018.