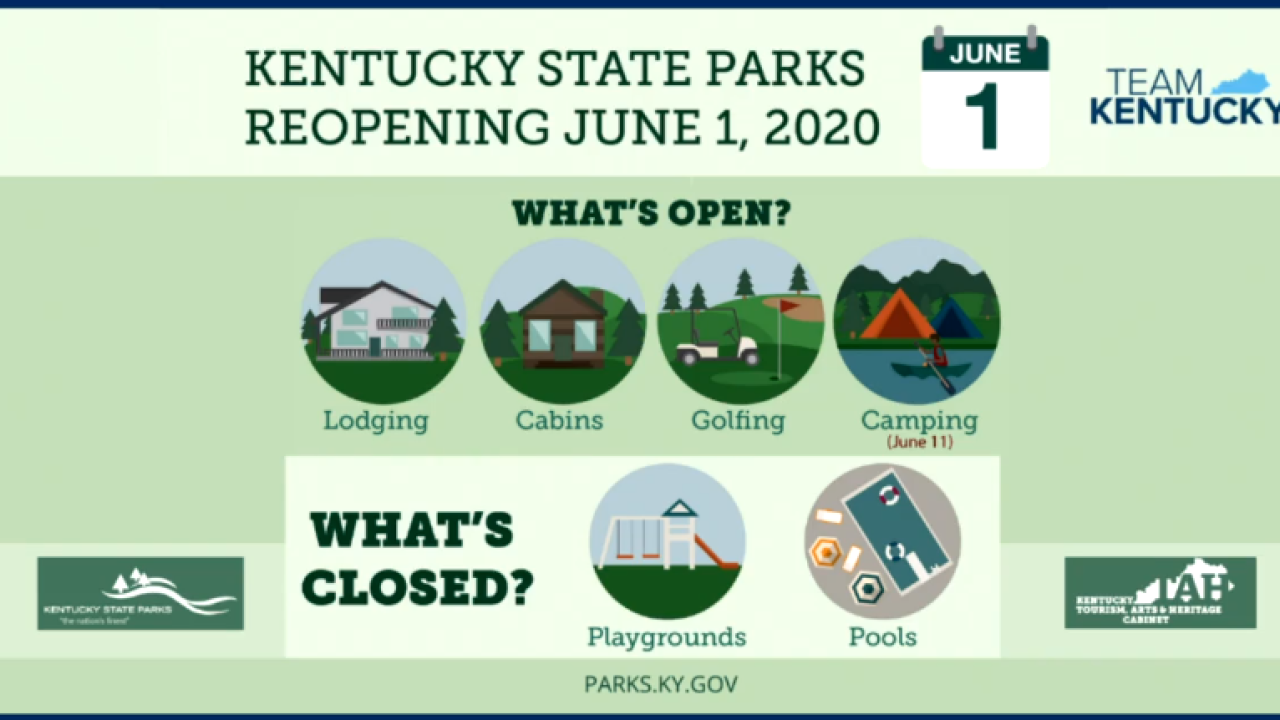 On Friday, Beshear said bowling alleys, movie theaters, and aquatics centers with lap pools can reopen June 1. However, community pools must remain closed due to the inability to social distance, Beshear said.

Several state parks, including the Kentucky Horse Park and Otter Creek Outdoor Recreation Area, can reopen June 11. Kentucky's tourism board is reopening state parks in an attempt to invigorate in-state travel for families through the summer.

At his Thursday briefing, Beshear moved up the date when Kentuckians can gather in groups of 10 people or less to Friday, May 22.

Beshear, who announced that people could gather in small groups in time for Memorial Day, advised people hold these gatherings outdoors and with social distancing precautions.

"What I see is that people are good at following the rules and want to do it right," he said.

Additionally, the governor's restrictions on interstate travel will expire on May 22.

Beshear, who has called for increased federal relief for weeks, announced Kentucky received $43.7 million in additional CARES Act funding Thursday. He said $30 million of that will go to K-12 schools and the remaining funds will go to post secondary education institutions.

Lt. Gov. Jacqueline Coleman announced that families whose income has been severely reduced by the pandemic can apply for help through the Team Kentucky Fund starting Friday. Coleman also encouraged Kentuckians to donate what they can to the fund.

So far, there have been 332 virus-related deaths and 7,444 total positive COVID-19 cases statewide. More than 2,700 people have recovered from coronavirus, and more than 127,689 people have been tested.

Where to get tested

In partnership with St. Elizabeth Healthcare, Kentucky opened a drive-thru COVID-19 testing site in Erlanger on Monday. The free testing site on 25 Atlantic Ave is open to anyone by appointment only through May 15. Call 1-800-737-7900 to make an appointment.

State leaders had previously announced that a 10-year-old and a 16-year-old had contracted a COVID-19-related "pediatric multi-system inflammatory syndrome."

Department of Public Health Commissioner Dr. Steven Stack said the 10-year-old in Kentucky had been put on a ventilator in critical condition due to a COVID-19-related inflammatory syndrome that affects young people. Beshear said that the child has been taken off a ventilator as his condition improves, and the 16-year-old has been released from the hospital.

Stack said symptoms of this immune system syndrome vary, and possible symptoms include fever, rash, abdominal pain mimicking appendicitis, gastrointestinal problems and respiratory problems. The syndrome, which Stack says is similar to Kawasaki syndrome, first appeared in New York state, which has been hard-hit with coronavirus cases.
"There's not much you can do to prevent this except to take all the steps we've told you about," Stack said, including social distancing, wearing masks and staying home.

Kentucky plans to reopen government offices and agencies on Monday, May 18.

Retailers, including flea markets, can open May 20. Funeral homes are also permitted to reopen May 20, the same day houses of worship can begin holding limited in-person services. Hair salons, barbershops, massage therapy and various cosmetology services can reopen on May 25.

Last week, the governor announced restaurants can reopen at 33% capacity with outdoor seating starting May 22. Beshear said bars will likely remain closed until July because it's harder to regulate social distancing inside bars than in restaurants. Beshear said bars can still operate as restaurants by offering food service at tables outside.

As part of Phase 2 of Kentucky's plan to reopen, Beshear announced that movie theaters and fitness centers can begin to reopen starting June 1. Camp grounds, both public and private, can reopen June 11. Childcare and youth sports can resume June 15.

Phase 3 of Kentucky's reopening includes gatherings of 50 people, though Beshear could not give a specific date for the transition. It's still unclear if public pools, including apartment complex pools, would be able to reopen in summer due to the inability for people using them to properly social distance.