Then & Now: How a troubled Washington Park became the centerpiece of a city 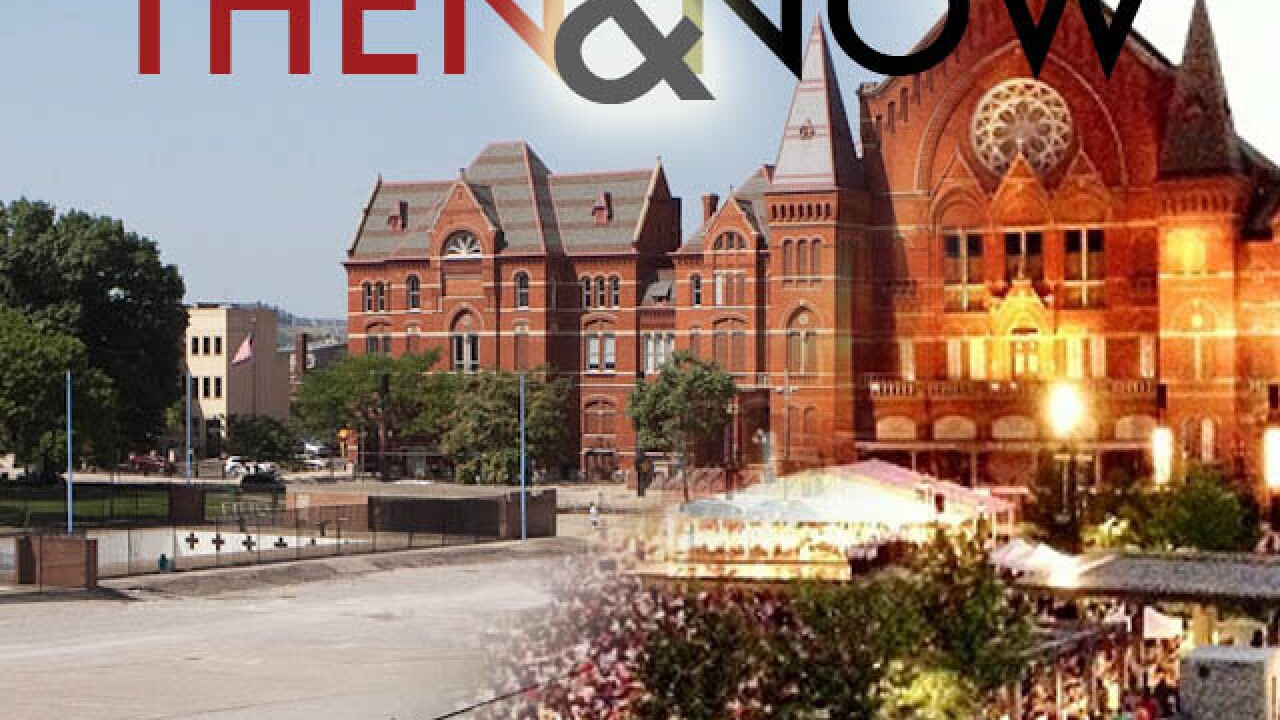 For a series of 'Then & Now' interactive looks at Washington Park's transformation, go to the bottom of the article.

CINCINNATI – This weekend, an estimated 38,000 people will make their way to Washington Park for LumenoCity – a three-day celebration of arts, culture and Cincinnati history.

But just a handful of years earlier, many wouldn’t have set foot in the historic park bounded by West 12th, Race and Elm streets in Over-the-Rhine.

“There were issues of behaviors in the park that weren’t so desirable,” said Steve Schuckman, superintendent of Planning and Design for the Cincinnati Park Board. “There were patrons of Music Hall who probably would not want to walk through the park just to get to and from Music Hall.”

Washington Park was acquired by Cincinnati in 1855 and park construction started in the 1860s.

In its early years, the park was host to many different attractions and featured a sequence of bandstands, walkways lined with benches, fountains, a pond, a wading pool and a swimming pool.

But as time went on, its shine dimmed and its visitors vanished.

Over-the-Rhine’s population dropped dramatically during Prohibition. As residents lost their jobs and moved to the suburbs, the once prosperous neighborhood became one of several declining areas in Cincinnati’s ring of slums.

Many of the park’s features began to deteriorate during the Great Depression and throughout World War II – and this trend continued into the end of the 20th century.

“Washington Park was a historic park, but it looked its age,” Schuckman said. “People from outside the neighborhood probably wouldn’t spend a lot of time in the park.”

Then, an opportunity arose.

After serving the community for 49 years, Washington Park Elementary School was demolished into a parking lot north of the park along 14th Street in 2007.

During that same year, the Cincinnati Board of Education decided it no longer needed the site, and arranged to give the land to the Cincinnati Park Board.

It was the perfect time for a transformation, Schuckman said.

“We knew we had an opportunity to… extend the park and improve it to become one cohesive place,” he said. “(We) wanted to create a park that was better, that had improved features to serve the people that live here.”

Soon, a new master plan was created for Washington Park’s renovation and expansion, and construction began in 2011.

The plan included the addition of an underground 450-vehicle parking garage and a complete redesign of the park.

One of the first things on the chopping block: the park’s swimming pool.

Schuckman said the pool was rarely used because there were already two others in the neighborhood.

Instead, designers decided to add a decorative fountain near the park’s center that was not only great to look at, but also fun for children to play in.

“I would guess that in the first hour of its operation, there were more people in that fountain than there were ever in the swimming pool,” Schuckman said.

The school’s demolition allowed the team to add a 49,000-square-foot civic lawn – the size of a football field – for outdoor performances, events and recreation. The lawn was designed to hold more than 10,000 people.

The massive garage was built under this expansion, so older trees and other historic portions of Washington Park were not disturbed.

“We wanted to maintain the character of the park,” Schuckman said. “The portals and elevators that lead out of the garage were placed carefully. The ramps in and out of the garage are fairly well hidden so that they didn’t disrupt anything. The portals even have extra glass with lots of sunlight coming through, so it feels like a very comfortable place to park.”

The transformation of the park also included the addition of a dog park and the construction of a new comfort station and playground.

After $47 million worth of work and planning, a transformed Washington Park reopened in July 2012.

The public was stunned – in a good way.

“No one expected that the bar would be up (so high),” Schuckman said. “We thought it would be a great new park, but to walk in here and see the smile on people’s faces… I don’t think any of us expected this kind of reaction.”

Now, at virtually every hour of the day and every day of the week, people from around the region enjoy Washington Park, Schuckman said.

And while some very imaginative people worked to rebuild this historic heart of Over-the-Rhine, no one saw the response to 2013’s LumenoCity concert coming.

When thousands of people packed into the park as a unified community, Schuckman knew Washington Park’s future was bright.

“As much as my jaw had dropped when we opened in July 2012, nobody could have imagined the lawn in the park filled with 10,000 people at one time,” he said. “My jaw dropped that much farther.”

In this interactive piece, we examine Washington Park before renovations began in 2011 and compare it to today.

HOW TO USE OUR TOOL: Click and hold the white circular “slider” tool at the center of each photograph. Then move the slider left and right to see “before” and “after.”(This feature may not be compatible with all versions of Internet Explorer, but works best with browsers like Firefox, Chrome or Safari.)

Washington Park lot before and after 2011 renovation

A parking lot sat north of the park along 14th Street between 2007 and 2011. The plot was originally home to Washington Park Elementary School before it was demolished. In the 'Now' portion of this image, you can see how the space was renovated to support an estimated 11,000 people at the 2013 LumenoCity concert.

This Aerial image of Washington Park compares 2010 (before the park's renovation in 2011) to 2013. North of the park along 14th Street, the Washington Park Elementary School served the community from 1958 to 2007. The school was demolished and its plot was used as a parking lot north of the park (as seen in the 2010 image). The lot was added to the park and converted to green space at the beginning of its 2011 reconstruction. Washington Park reopened to the public in July 2012.

Another shot of the civic lawn added to the park along 14th Street after the school's demolition. The above image compares this portion of the park during its construction in 2011 to today. The 49,000-square-foot lawn, the size of a football field, is a venue for outdoor performances, events and recreation. The lawn can comfortably hold more than 10,000 people for events and is surrounded by public benches in natural shade.

In the mid-20th century, park additions included a swimming pool, a comfort station and the playground seen here. The swimming pool and this playground were removed during the 2011 renovation. A new comfort station and playground were then built in different locations in the park. Today's new playground is fenced in and covers 18,000 square feet. It features a boardwalk and stage, a sandbox, a canal boat in a water channel and climbing walls based on Cincinnati’s historic architecture.

This iconic historic bandstand remains preserved in its original 1911 location. It was restored to its original stature and is the centerpiece of Washington Park. Today, it is illuminated by Tivoli lights, surrounded by benches and encircled by paving stones. The bandstand also has a ‘plug-and-play’ tech center for simple performances.

The redesign of this walkway and other parts of Washington Park in 2012 marked 200 years of change to this now eight-acre urban oasis. The park has served Cincinnatians in various ways since the early years of the city.

Many have claimed this granite boulder is a meteorite, but it was most likely pulled from the Little Miami River in 1863 near the Waterworks Plant, according to the park's website. At one time, a drinking fountain was mounted on the boulder. Remnants of the fountain are visible today. The boulder was transported to the park in 1863 for $100. The boulder weighs 10 tons, is 11 feet long, 5 feet wide and 6 feet high. It was moved during the 2011 renovation.

This image shows a portion of the park before and after its renovation in 2011. The new park is a balance of old and new. Existing trees and the pastoral character of the southern half of the park have been preserved, and existing historic columns and walls were salvaged and reused. New columns will match the historic ones and have new Rookwood tile insets.

This bench, called the “I Have a Dream of Peace,” was brought to life through a collaboration of more than 400 children and adults from the community in 2002 and placed in the park. Through a partnership between the Peaslee Neighborhood Center, the Art Academy of Cincinnati, and Miami University’s Center for Community Engagement, artist Suzanne Fisher collected images of peace submitted by neighborhood residents and local artists. She then refined the images and transferred them to the bench. It remains a prominent feature of the park today.

This interactive image shows one of several Washington Park signs at the park today compared to a graffiti-marked sign from before the park's renovation.