Then & Now: An interactive look at downtown Cincinnati's past 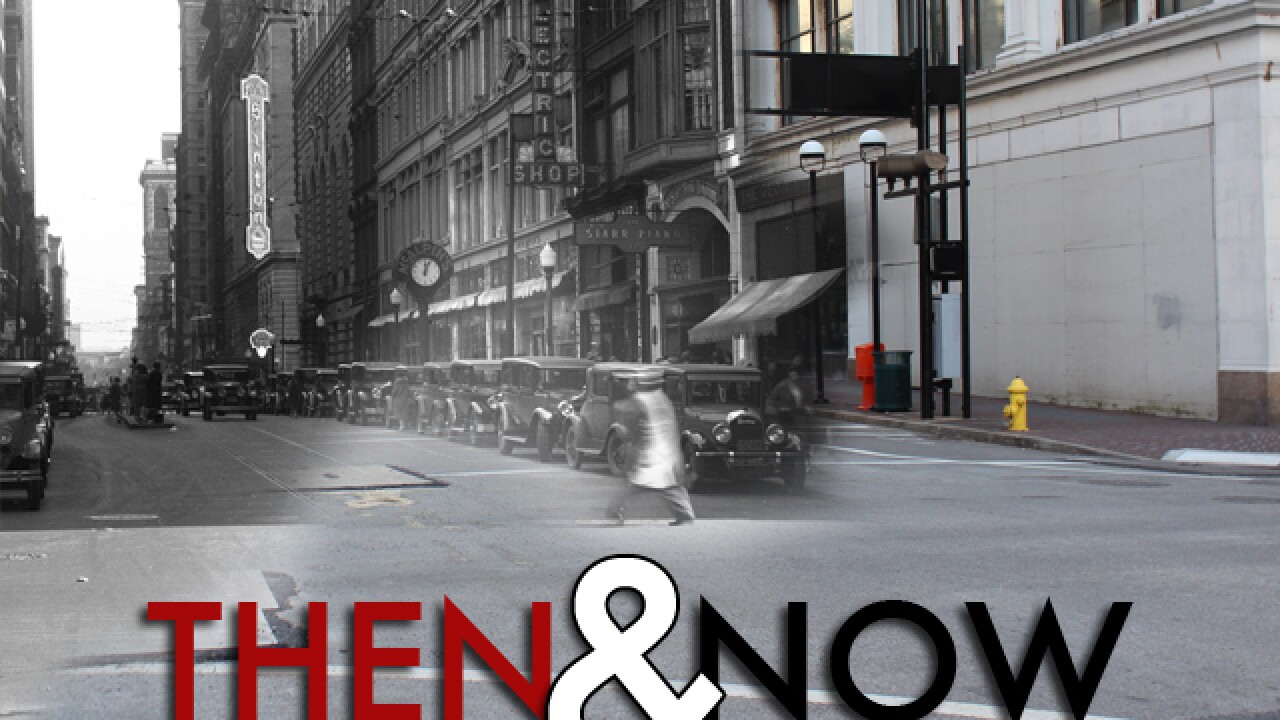 In the 19th century, the hum of steamboats echoed through the air – not cheers from two sports stadiums and crowds packing into busy bars.

With preserved photos from University of Cincinnati's Archives & Rare Books Library, WCPO has opened a window to the past to see how the Queen City has grown and changed. The interactive boxes below compare early images of downtown Cincinnati with images taken today.

HOW TO USE OUR TOOL: Click and hold the white circular “slider” tool at the center of each photograph. Then move the slider left and right to see “THEN” and “NOW.”

In 1927, the horse and buggy -- also called a roadster -- was still a popular method of transportation. The roadster sitting at the corner of Elm and McFarland streets (right side of the photo) most likely belonged to a wealthier Cincinnatian because it was a more elegant four-wheeled model.

Elm Street at the time was known for its lavish shops. In the building behind the buggy was American Railway Express, a package shipping service that used railroads to deliver goods -- a precursor to the United Postal Service we use today. Also in this building was the Joseph Lazarus Co., which specialized in women’s hats. In the building next door, past the intersection of 4th and Elm streets, was the People's Bank. Famous Specialty Clothing shop, Schuster Electric Company and another hat shop were also in this building. In this same spot today sits a large parking garage. Across the street (left side of the photo) were more clothing and accessory shops, including the Leather Specialty Company.

If you look very closely, the vehicle next to the horse and buggy has a swastika, a symbol adopted by the Nazi Party of Germany in 1920. Before it was associated with the Nazis, the swastika had a brief surge of popularity as a good luck symbol in Western culture. Adolf Hitler came to power in 1933 and incorporated the symbol into the state flag of Germany. Because Cincinnati is home to a large German heritage, it is unknown if the swastika on the vehicle in this photo was associated with the Nazi party.

In 1928, streetcar tracks lined the centers of Walnut and 5th streets downtown. Unseen in this image, behind the photographer, was Tyler Davidson Fountain at the fountain's longtime original location. A 1971 renovation of Fountain Square included slightly moving and re-orienting the fountain to the west, and enlarging the plaza by removing the original westbound portion of 5th Street and demolishing buildings to the north. The buildings at this intersection in 1928 were demolished and replaced. Cincinnati's original streetcar system closed in 1951 and tracks were paved over.

In 1929, 4th Street -- from Race to Sycamore streets -- was Cincinnati’s financial center. Its tall buildings gave the narrow street the appearance of a canyon, and in this canyon existed most of the city’s larger banks, insurance companies, investment and brokerage houses, utilities offices and more. On this corner (the left side of the photo) was Third National Bank and Gidding Co., which sold women’s apparel. The H. & S. Pogue Company department store was also at this corner. Pogue's was well known by Cincinnatians for elaborate Christmas displays and a miniature train in the store's fourth floor auditorium. In October 1986, Pogue's downtown store suffered when its other locations closed. The building was later demolished to make way for Tower Place Mall.

Brewning, King & Company sold clothing across the street (the right side of the photo). Behind it sat The Geo F. Otte Co., which sold carpets. Under the “Electric Shop” sign was Union Gas & Electric Co. The building with the round clock sign in front was McAlpin's Department Store, which is now filled with apartments. And in the way back right with the large vertical sign was Sinton Hotel – the same hotel where Chicago White Sox players are rumored to have agreed to throw the 1919 World Series to the Cincinnati Reds. The hotel was demolished in 1967.

Almost unchanged in the southwest corner of Elm and 8th streets (left side of the photo) is the Covenant-First Presbyterian Church. Dedicated in 1875, the building was first known as the Second Presbyterian Church. In 1909, following a drop in members, it was formed into the Church of the Covenant. Behind it was an apartment building that was later demolished to make way for the parking garage you see today.

Across from the church (the right side of the photo) in 1930 was a small café called Delicatessens and Lunch. Today in the same spot sits Marrakech Café, which serves Middle Eastern food. Above Delicatessens and Lunch was a dentist’s office. The dome behind this building was called Temple Court. The rounded brick building was constructed in 1864 as a house of worship for the First Congressional Church. In 1887, the Unitarians that flocked to the church built a new house of worship at Reading Road and Lincoln Street and moved there. The building was then remodeled and housed offices for lawyers and an insurance company. It would later be demolished when these professionals moved to modern skyscrapers.

The clock tower structure behind Temple Court is City Hall, which remains today. The massive red granite building was completed in 1893.

Cincinnati’s downtown riverfront once saw more than 30 steamboat visits a day. It later became the epicenter of freight rail for the western portion of the United States. Today, the riverfront is home to luxury apartments, athletes, shops and fine dining. This photo, taken from Newport in 1907, shows the city's skyline from beyond the Roebling Suspension Bridge.

This image of the riverfront was captured between 1910 and 1920.

A comparison of the 1912 and 2013 city maps. In just more than 100 years, the landscape of Cincinnati's riverfront and downtown area have changed tremendously.

An aerial image of Cincinnati taken in 1949 compared to today shows how the warehouses and industrial portion of the riverfront have transformed into The Banks and sports stadiums.

Cincinnati's riverfront in 1950 compared to today. The Scripps Center was completed in 1990. The Great American Tower at Queen City Square was finished in 2010.

Riverfront Stadium, later renamed Cinergy Field, opened June 30, 1970 and hosted the Bengals and the Reds. On December 29, 2002, it was demolished by implosion. Today, the Current at the Banks apartments and Great American Ball Park stand in its place.

The above was just a taste of WCPO's "Then & Now" series. Insiders can interact with the region's history even more by clicking the following: