CINCINNATI – Lt. David Herth describes the Queen City Barrel blaze as "one of the most exciting fires" he has fought in his more than 26 years with the Cincinnati Fire Department.

The five-alarm fire had towering flames, billowing smoke and a fireball that just barely missed some of his colleagues.

But Herth has more than dramatic stories to tell from that day a decade ago.

He also has concerns about the long-term health impacts of fighting a fire without knowing exactly what hazards he was exposed to on Aug. 19, 2004.

"I don't think there was any fear of what was burning at the time," said Herth, who is now 52 and still stationed at the Lower Price Hill firehouse not far from where Queen City Barrel once stood. "But after you think about it, what kind of chemicals were in those barrels? That weighed on your mind after the fact."

All these years later, Cincinnati Fire Department officials and leaders at the Cincinnati Fire Fighters Union Local 48 still can't be sure whether firefighters who spent hours on the scene of the Queen City Barrel fire have health problems as a result. The fire started around 6:30 p.m. with crews putting out hot spots prior to demolition for a couple days after that. About 160 firefighters responded in total, and investigators were never able to determine where or how the fire started. It caused $5 million in damage.

Two firefighters who were there have since retired with different neurological problems. One had symptoms that mimicked ALS with muscle weakness across his body. Another had breathing problems because of a weak diaphragm. But officials couldn't pinpoint either of the conditions to any specific exposure, said District Chief Marc Monahan.

A few others have reported diagnoses of prostate cancer, but those haven't been linked definitively to the Queen City Barrel fire either, said Ken Kiefer, a retired Cincinnati Fire Department captain who now works as Local 48's workers' compensation and pension representative.

"The latency period on a lot of these cancers is 20-plus years," Kiefer said. "It's complex."

Anytime a crew is first on the scene of a fire, there is information they simply won't have before they must get to work, Herth said.

Firefighters can get information about the potential hazards of the fires they fight more readily now than they could 10 years ago, mostly because technology has improved dramatically, Monahan said.

These days, each of the city's four district chiefs' vehicles and the department's safety officer have iPads loaded with inspection reports, building layouts and information about potential hazards at the scene of many commercial buildings, he said.

A decade ago, some of that information might have been inside a binder on a fire truck, which made it much more difficult to access, he said.

Still, part of the reason for the lack of information about the chemicals at the Queen City Barrel facility was because of the nature of the business, said Special Operations Chief Tom Lakamp.

Queen City Barrel recycled tens of thousands of barrels at any given time, all of which had trace amounts of chemicals or some other substance inside.

Don Hayden, a long-time maintenance worker of the company, told fire investigators in 2004 that the steel, plastic and fiber drums that Queen City Barrel refurbished ranged from 16-gallon to 85-gallon capacities.

"He stated that prior to being sent to Queen City, the various drums potentially contained products ranging from inks, paints, varnishes, resins, oils, food products, chemicals and chemical powders and even pickled monkey parts," according to a report submitted by a special agent of the Treasury Department's Bureau of Alcohol, Tobacco and Firearms who helped the Cincinnati Fire Department with the investigation.

Queen City Barrel only took possession of the drums if they contained an inch or less of product, several employees told investigators. Regulators considered the barrels to be technically "empty" if they contained that small amount, the employees said.

Those rules and regulations haven't changed over the years, Lakamp said.

But clearly, even a small amount of chemicals in the roughly 45,000 barrels stored at the facility amounted to a potential hazard, Lakamp said.

"Queen City Barrel was always the 'Man, I don't want to be working when that comes in,'" he said.

That's not to say nothing has changed in the way fire fighters protect themselves from the hazards they face.

Firefighters now have two sets of gear so that after they finish fighting a fire they can change out of gear that could carry contaminants, Monahan said. They didn't have that a decade ago, he said.

Fire stations also are now equipped with giant washing machines known as extractors and trained personnel to operate them, he said. Those weren't around 10 years ago either.

A University of Cincinnati study conducted in 2006 recommended that firefighters remove contaminated clothing and gear after fighting a fire and shower as quickly as possible, Monahan noted.

"The bottom line is, you're still exposed to hazards that there's nothing you can do about," he said. "It's part of the job. You're showing up at a hazardous scene."

And even after firefighters get diagnosed with cancer or some other serious illness or ailment, their first concern is typically getting back on the job, Kiefer said.

Despite unanswered, and perhaps unanswerable, questions the fire marked an important milestone in Lower Price Hill’s environmental justice efforts and bound a tight community even tighter. 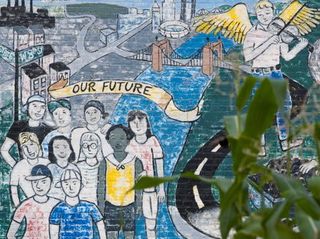 Queen City Barrel is long gone from Lower Price Hill. But barrel business owner Eddie Paul may never leave and continues to be involved in the family business of barrel cleaning. 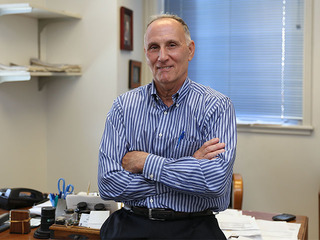 This article is part of of the series Rising from the Ashes, in which WCPO remembers the Queen City Barrel fire a decade later.  We invite you to explore photos, an interactive timeline as well as articles about the Lower Price Hill neighborhood and business owner, Eddie Paul, who is still working in the barrel-cleaning business, at www.wcpo.com/QCBarrelFire.

PHOTOS: The fire, from the Cincinnati Fire Department's perspective

PHOTOS: The people of Price Hill