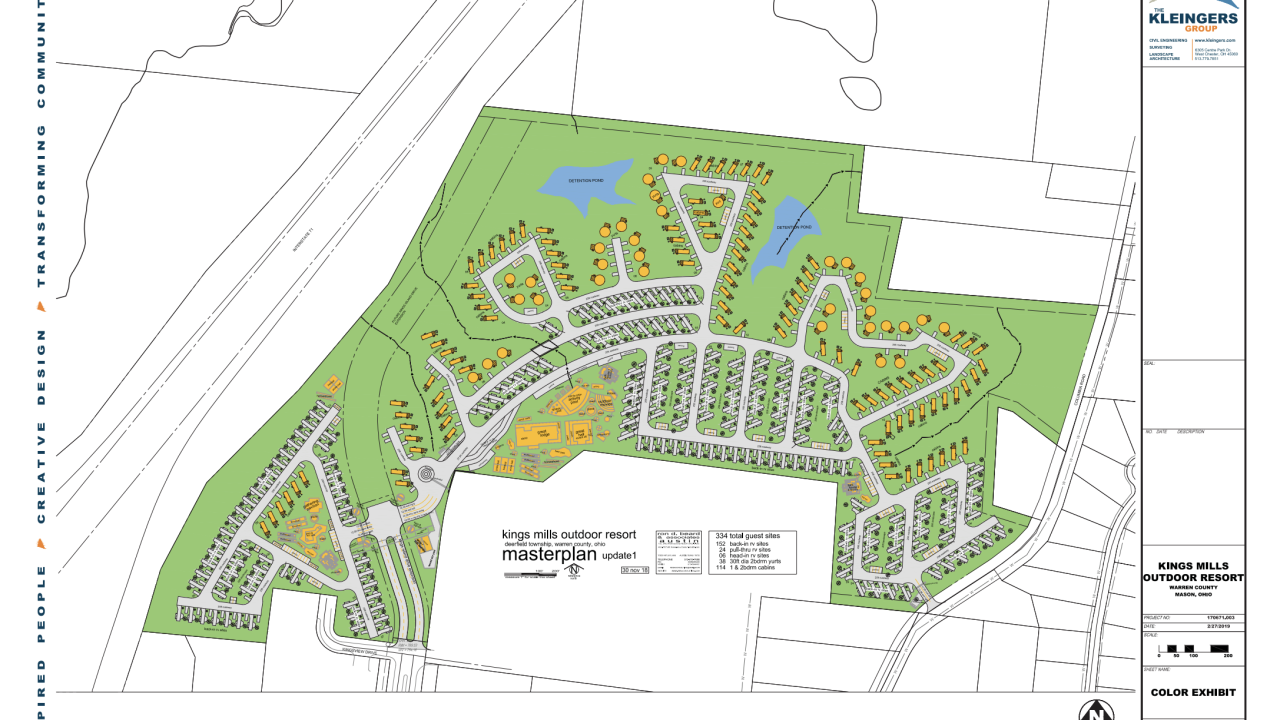 Plans call for 182 sites for recreational vehicles, 114 one- and two-bedroom cabins and 38 3o-foot diameter two-bedroom yurts, which are circular tents.

“The preliminary plans look intriguing. The combination of recreational vehicle sites, cabins, yurts, and the other resort amenities could be an excellent addition to the lodging choices already here in Warren County,” Phillip Smith, president and CEO of the Warren County Convention & Visitors Bureau, said.

“The applicant proposes to redevelop the parcel directly north of Kingsview Road in Deerfield Township,” according to a draft of the staff report.

Haglage plans a range of amenities on the property.

“The applicant would like to construct on-site lodges, theater, gift shops, convenience stores, event center, game courts, and swimming pools, with parking spaces,” according to the staff report.

Staff recommends approval with conditions, including a site evaluation by the Warren County Combined Health District.

Haglage could not be reached.

The land is behind a McDonald’s restaurant, off the Ohio 741-Kings Mills exit.

Sam Hill, planning and zoning director for Deerfield Twp. and chair of the regional planning commission executive committee, said he had not reviewed the project.

He said it could be reviewed in April by township planning officials and proposed for approval by the township trustees in May.

The project is to be reviewed by the commission on March 28 at the Warren County Administration Building in Lebanon.

Hill said the amusement park once operated a campground on its property.

The amusement park lists several nearby campgrounds and outdoor resorts nearby, including the Morgans Riverside Campground and Cabins outside Morrow and the Beechwood Acres and Thousand Trails camping resorts outside Wilmington.

“It’s my understanding that approximately 40 million Americans are involved in recreational-vehicle camping, and wholesale shipments of recreational vehicles has grown every year since 2009,” Smith added in an email.

“We certainly want people with RVs to visit Ohio’s Largest Playground and then visit our attractions, dine in our restaurants and shop on our main streets. So this project looks like it could be a good fit for Warren County.”