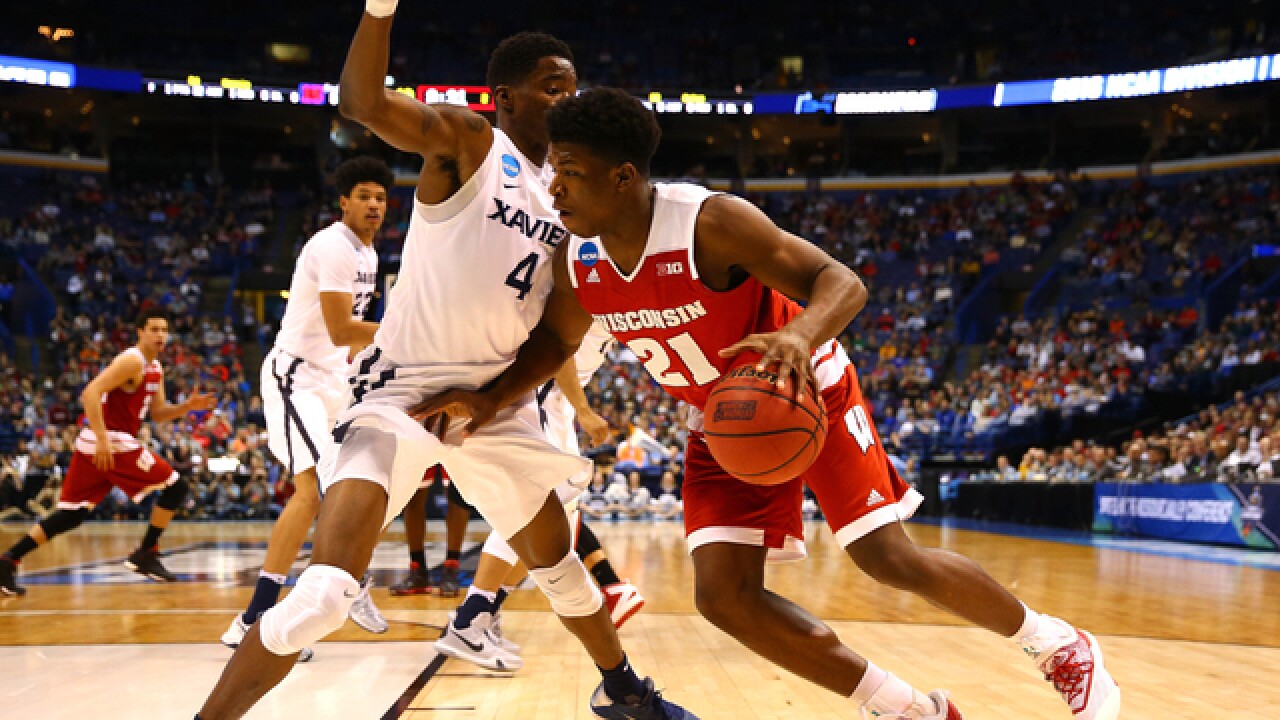 Dilip Vishwanat
<p>ST LOUIS, MO - MARCH 20: Khalil Iverson #21 of the Wisconsin Badgers handles the ball against Edmond Sumner #4 of the Xavier Musketeers in the second half during the second round of the 2016 NCAA Men's Basketball Tournament at Scottrade Center on March 20, 2016 in St Louis, Missouri. (Photo by Dilip Vishwanat/Getty Images)</p>

ST. LOUIS (AP) -- Wisconsin coach Greg Gard never lost confidence in Bronson Koenig, even when he struggled in the Big Ten Tournament and failed to hit a 3-pointer in an NCAA Tournament win over Pittsburgh.

Gard proved just how much he believed in him Sunday night.

After watching the talented sharpshooter hit a tying 3-pointer from well beyond the arc, Gard drew up another play for him with a couple ticks left on the clock. Koenig took the inbound pass, whirled around and buried the shot to give the Badgers a 66-63 victory against second-seeded Xavier and a spot in the Sweet 16.

"I tried to tell him to keep shooting. The last couple of games the ball hasn't gone in like he wanted to," Gard said. "You can't lose confidence in him. Tell him to keep working and it'll work out OK."

Koenig finished with six 3-pointers and 20 points. Ethan Happ had 18 points and Vitto Brown finished with 12 for Wisconsin (22-12), which improved to 15-5 in the NCAA Tournament over the past six seasons.

The No. 7 seed Badgers will face sixth-seeded Notre Dame on Friday in Philadelphia.

He had a similarly good feeling about his 3 from well beyond the line that tied it at 63 with 11.7 seconds remaining. And when Edmond Sumner was called for an offensive foul driving to the basket for Xavier (28-6), the Badgers got the ball back with a chance to make Koenig's memorable night even better.

Remy Abell and Jalen Reynolds had 13 points apiece and Sumner scored 11 for Xavier, which had a 58-49 lead with just over 6 minutes left.

"Really, really tough locker room," Xavier coach Chris Mack said. "Told the players in the locker room that the sun will shine tomorrow. It doesn't feel like it. But it always does."

The game lived up to its rough-and-tumble billing, the pendulum swinging wildly in the first half.

The Badgers, who struggled to score 16 points by halftime in their 47-43 win over the Panthers, raced out to a 17-8 lead before Xavier could blink. But the 1-3-1 zone of the Musketeers eventually slowed them down, and the Big East runner-ups countered with a 21-8 run of their own.

They led 33-30 at halftime in an arena heavily tilted toward Badger fans.

The lead changed hands six times in the early minutes of the second half before the Musketeers began to assert themselves, and Abell knocked down a 3 to give Xavier a 49-47 lead.

Cheered on by super-fan Bill Murray, the actor and comedian whose son Luke is an assistant on Chris Mack's staff, the Musketeers eventually pushed their lead to 58-49 - their biggest of the game.

The Badgers weren't done, though. They never seem to be this time of year.

Seeking a third straight trip to the Final Four, the Badgers quickly cut into their deficit. Koenig hit a pair of foul shots, and then a strip-steal turned into a layup for Showalter. Hill hit another shot to make it 61-57 at the under-4 minute timeout.

The Badgers didn't stop coming back until the final shot of the game.

"This group just would not quit, would not give in," Gard said. "I can't be more proud of a group of young men that have withstood every challenge that's come at them, every adversity piece."

"They made some 3s. I can't believe it. It's still a shock. It's the NCAA Tournament. You've got to expect those types of things." - Xavier guard Myles Davis.

Trevon Bluiett was held to seven points on 3-for-11 shooting. ... The Musketeers had been 26-0 this season when leading at halftime. ... Xavier had won the last two meetings between the schools.