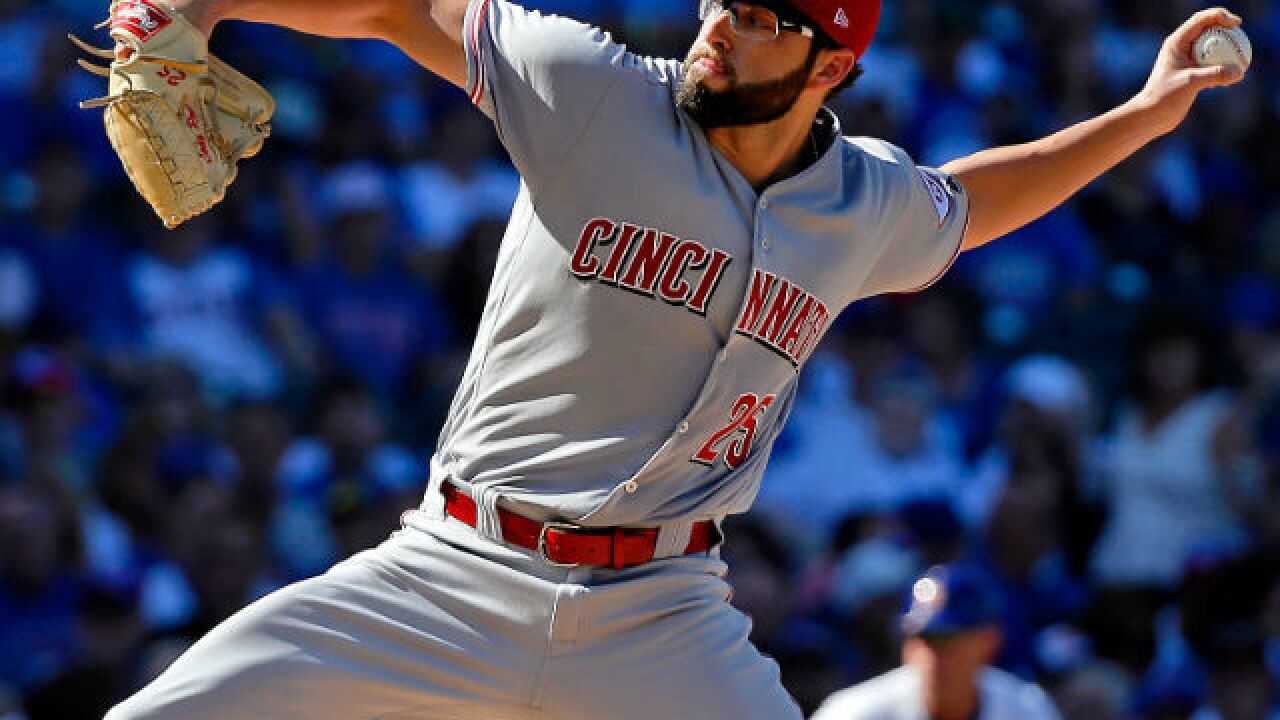 Image copyright 2018 Getty Images. All rights reserved. This material may not be published, broadcast, rewritten, or redistributed.
<p>CHICAGO, IL - SEPTEMBER 15: Cody Reed #25 of the Cincinnati Reds pitches against the Chicago Cubs during the first inning at Wrigley Field on September 15, 2018 in Chicago, Illinois. (Photo by Jon Durr/Getty Images)</p>

CHICAGO —For the second day in a row, Jim Riggleman's decision to pull a pitcher throwing a shutout backfired on the Reds interim manager.

Riggleman pulled Cody Reed after five innings Saturday even though Reed struck out 10 Cubs - a career high -and held them to two hits. And just like Friday, when Riggleman took out Matt Harvey after six scoreless innings, the Cubs proceeded to score the winning run in the next inning.

Willson Contreras hit a run-scoring single in the sixth inning Saturday and the Cubs beat the Reds 1-0  to maintain their NL Central lead.

"Did what we wanted him to do," Riggleman said. "Get us to that point of the ballgame and give us a chance."

Javier Baez led off the sixth with an infield single against Sal Romano (7-11), advanced on David Bote's groundout and scored on Contreras opposite-field single to right with two outs.

The Reds couldn't touch Cubs starter Jon Lester, who allowed two hits over seven innings with a season-high nine strikeouts.  Lester (16-6) is 4-1 with a 1.73 ERA in his last six starts, following a mid-season slump.

A day after the Cubs said closer Pedro Strop has a hamstring strain that will cause him to miss the rest of the regular season, four pitchers combined for two-hit relief. Justin Wilson pitched the eighth. Jesse Chavez got the first out in the ninth and Randy Rosario retired Joey Votto on a fly to warning track in left-center. Steve Cishek retired Eugenio Suarez on a broken-bat grounder to third for his fourth save.

Each team had just two soft singles through five innings on an afternoon of bright sunlight and shadows that covered home plate. The lights in the 104-year-old ballpark were on when the game started shortly after 4 p.m. EDT. Cubs slugger Kris Bryant struck out swinging four times.

Cubs RHP Brandon Morrow, who had 22 saves in 24 chances before going on the disabled list on July 18, hopes to be reactivated in the next few days after throwing a 19-pitch simulated game on Saturday. "It all depends on how I come in tomorrow," Morrow said. "I expect to feel good enough. It was a successful day."

Morrow revealed his injury was a bone bruise in his right forearm, caused by muscle overuse and a stress reaction from pitching. "Throwing too hard," he quipped.

Manager Joe Maddon said he doesn't think he'll initially use the right-hander in a save situation. Maddon will monitor Morrow's pitch counts and doubts the reliever will be able to throw in consecutive games unless the Cubs advance deep into the postseason.

Reds: RHP Michael Lorenzen will start in place of RHP Tyler Mahle (right shoulder fatigue) on Tuesday. Mahle's status for the remainder of the season is uncertain, manager Jim Riggleman said. The 26-year old Lorenzen hasn't make a start since September 2015, at the close of his first season with the Reds and in the majors.

Cubs: Maddon said OF/IF Kyle Schwarber (back) could be cleared for pinch hitting this weekend and return to the lineup when the Cubs travel to Arizona for a three-game series starting Monday. ... Maddon also expects OF Jason Heyward (right hamstring tightness) to return during the series against the Diamondbacks.