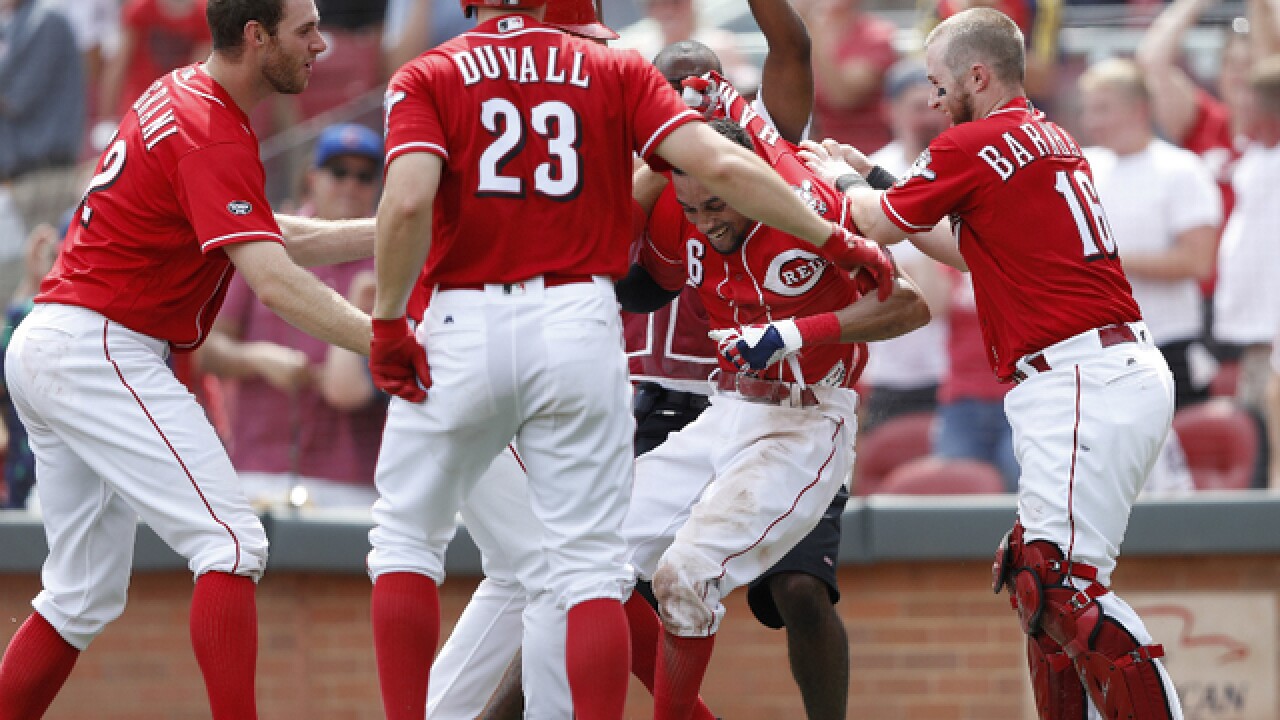 <p>CINCINNATI, OH - JULY 17: Billy Hamilton #6 of the Cincinnati Reds is mobbed by teammates after scoring the winning run on a wild pitch in the ninth inning against the Milwaukee Brewers at Great American Ball Park on July 17, 2016 in Cincinnati, Ohio. The Reds defeated the Brewers 1-0. (Photo by Joe Robbins/Getty Images)</p>

CINCINNATI (AP) -- Billy Hamilton didn't use up all of his speed to beat the Milwaukee Brewers on Sunday.

He had enough left to avoid the media after the game.

Hamilton wasn't around to talk about dashing home on All-Star Jonathan Lucroy's passed ball with two outs in the ninth inning, giving the Cincinnati Reds a 1-0 win over Milwaukee.

Manager Bryan Price was more than happy to talk about the disruptive Hamilton.

"Billy is that guy," Price said. "He affects the game. He changes the look of the game. He creates a lot of anxiety on the basepaths. That ball didn't get that far away from Lucroy. That ability of his to start and stop creates the opportunity."

Hamilton stole third with Jay Bruce hitting, setting up the game-winning play. Smith's curveball glanced off Lucroy's glove as Bruce swung and missed and rolled away to the catcher's left.

The ball didn't even reach the dirt track near the visitor's dugout, but still was plenty far enough away for Hamilton to score easily.

"That's what speed does," Smith said. "It makes you freak out."

It was originally scored as a wild pitch, then changed to a passed ball.

"The pitchers deserve better," Lucroy said. "(Starter Zach) Davies deserved better. That can't happen. That's minor league stuff right there. I should've caught it. If it's in the air and I get a glove on it, I've got to catch it."

Tony Cingrani (2-2) pitched a perfect ninth for the win.

Straily, who was 1-4 over his last five starts, gave up three hits, walked one and struck out four. He set down nine straight batters in one stretch and didn't allow a runner to reach second base until the sixth, when Jonathan Villar led off with a walk and stole his major league-leading 33rd base.

Villar went to third on catcher Tucker Barnhart's throwing error, but Lucroy grounded out to end the threat.

"I was able to throw my fastball where I wanted to, when I wanted to," Straily said. "I felt good. The All-Star break is designed to allow us to refresh, and I really felt good today."

Davies, recalled from Triple-A Colorado Springs before the game, allowed four hits with no walks and five strikeouts.

The Reds got two hits on his first three pitches, putting runners at first and third, but Davies escaped.

Four of his five strikeouts were called and he fielded four balls, only one hit sharply.

"That's a really good example of knowing when I'm locating and mixing it up," Davies said. "I know it's going right when they're taking pitches and not getting good swings on balls."

Milwaukee put runners at first and second with two outs in the eighth against Michael Lorenzen, but Ryan Braun grounded out.