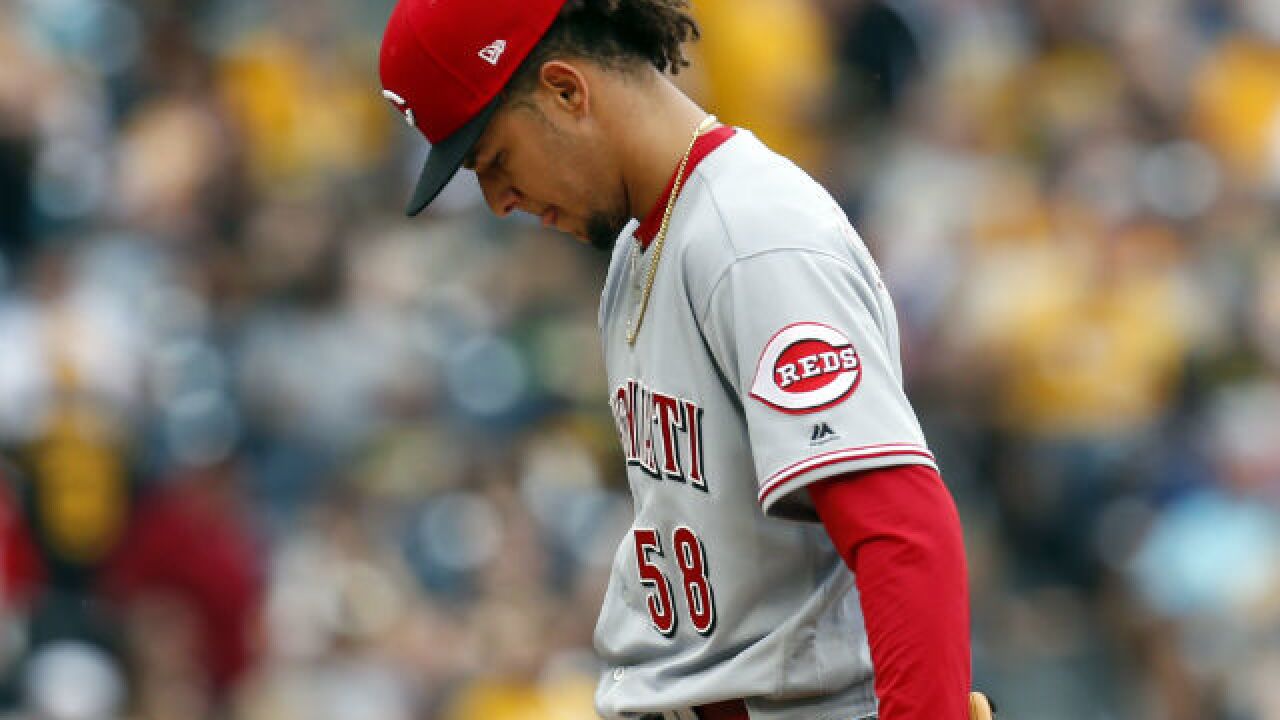 Image copyright 2018 Getty Images. All rights reserved. This material may not be published, broadcast, rewritten, or redistributed.
<p>PITTSBURGH, PA - JUNE 16: Luis Castillo #58 of the Cincinnati Reds hangs his head after giving up a home run in the third inning against the Pittsburgh Pirates at PNC Park on June 16, 2018 in Pittsburgh, Pennsylvania. (Photo by Justin K. Aller/Getty Images)</p>

PITTSBURGH – Luis Castillo came out of spring training looking like “the most likely to succeed” among the Reds’ young starting pitchers.

And when he started 4-4, it looked like he was on his way.

But that was four starts and four losses ago.

Now Castillo can’t keep the ball in the ballpark.

The 25-year-old righty gave up two more homers in a 6-2 loss to the Pirates Saturday. He's now allowed at least one home run in 15 of his 18 starts.

"It's surprising because I'm trying to do my best and every time I get out there, I give up one or two home runs," Castillo said. "I really don't know what's happening right now.”

Castillo has given up 17 homers – one shy of the major-league lead. But he has plenty of company where giving up home runs is concerned.

Homer Bailey (15) would be seventh if he were listed and not on the disabled list. Tyler Mahle and Sal Romano (13 each) are tied for 16th.

Castillo has an ERA of 6.97 in his last four starts. He has given up six homers and 16 earned runs in 20 2/3 innings, and he’s only pitched past four innings in one of those starts.

Pittsburgh’s Colin Moran and Elias Diaz hit solo shots off Castillo (4-8) on Sunday, and Cincinnati native Josh Harrison homered off reliever Austin Brice. Harrison is hitting .368 (14 for 38) against the Reds.

"You go through these things,” said Reds interim manager Jim Riggleman.  “We've got a good offensive ball club. We've shown it many times. We're just in a little funk."

The Reds’ only runs came on solo homers by Eugenio Suarez and rookie Brandon Dixon, his first  in the majors.

Moran broke a tie with his fourth home run of the season and first since June 2 when he sent Castillo's pitch into the bullpen beyond the center field fence leading off the second. Diaz made it 3-1 when his fifth home run led off the third.

The Reds had their opportunities against Pirates starter Ivan Nova (4-5). They loaded the bases in the fourth only to have Billy Hamilton ground out to first to end the threat. Scott Schebler led off the fifth with a double but couldn't get home and Hamilton came to the plate in the sixth with two runners on only to fly out to left field.

Reds: Anthony DeSclafani (1-1, 5.40 ERA) starts the series finale on Sunday. The 28-year-old picked up his first victory since 2016 in his previous start against St. Louis.

Pirates: Joe Musgrove (2-1, 2.16) makes his first career start against the Reds. Musgrove gave up two earned runs in five innings of a no decision on Monday against Arizona.