Chapman puts on a show in Yankees' debut 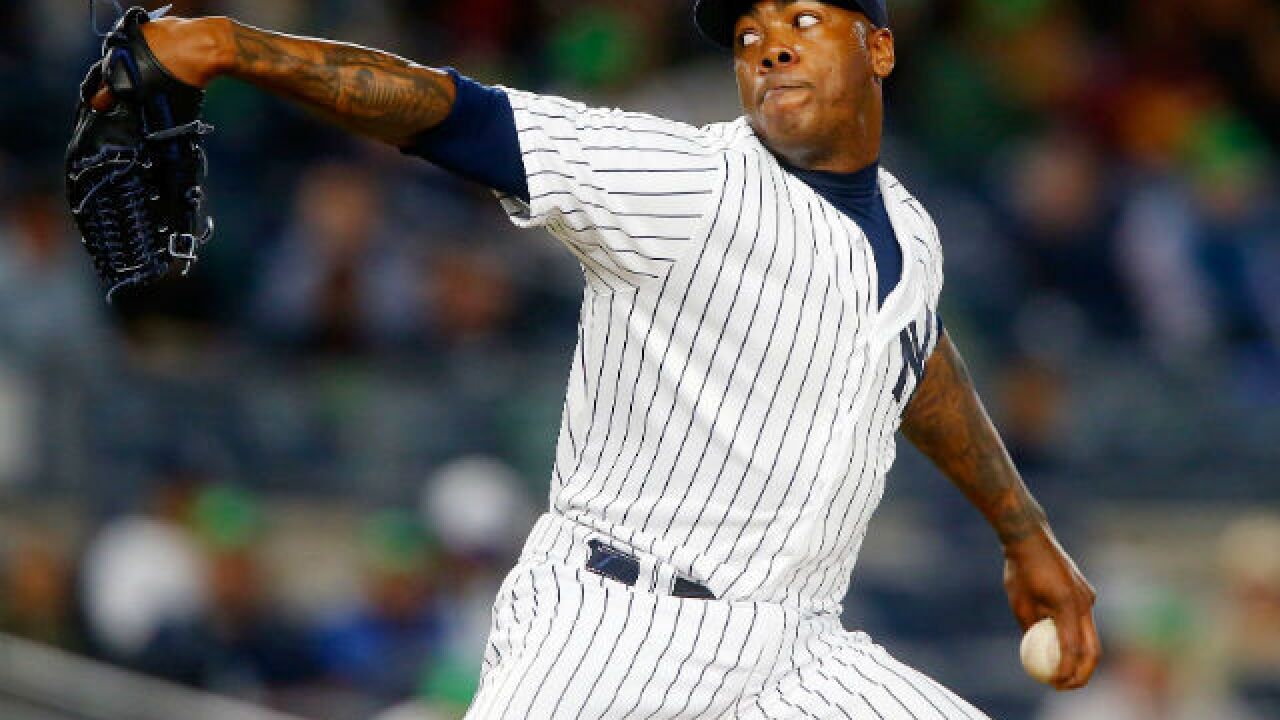 <p><span>NEW YORK - Aroldis Chapman #54 of the New York Yankees pitches in the ninth inning against the Kansas City Royals at Yankee Stadium on May 9, 2016. (Photo by Jim McIsaac/Getty Images)</span></p>

NEW YORK – It looked like old times at Great American Ball Park, but it was Yankee Stadium and those were Yankee fans  - not Reds fans – mesmerized by their first sight of Aroldis Chapman's 100+ mph fastball Monday night.

Even Yankees manager Joe Girardi  admitted to looking up at the scoreboard to see what the speed gun registered.

"I think we all take a look at the board to see [how fast] it is," Girardi said. "There's some guys in the back of that bullpen that throw really hard. To see that 101, that's not something you see every day."

"He put on a show for the crowd tonight," said fellow reliever Dellin Betances said. "And today wasn't even his best stuff."

Fans stood and cheered as Chapman pushed the speed gun to 101 in his first regular-season appearance since his off-season trade from the Reds. He entered to an outburst of applause with a 6-2 lead over the Royals in the ninth and drew gasps from the crowd by firing his first two pitches at 100 mph, both strikes. Chapman struck out his first two batters before pinch-hitter Paulo Orlando doubled and scored on a single by Alcides Escobar. Chapman got  Lorenzo Cain to hit a comebacker to end the game.

Chapman was eligible to pitch for the first time for the last-place Yankees (12-18) after serving a 30-game suspension under baseball's new domestic violence policy.  He got credit for a rainout so he actually missed 29 games.

Chapman described the outing as "good" and  "comfortable."

"[I was] very excited and happy that the fans received me the way they did,"  the Cuban native said through an interpreter. "But I was looking to stay focused and get the job done."

Chapman spoke to the media Sunday afternoon about his suspension, saying  he has learned from this experience and apologizing for what he described as "bad judgment."

Chapman has insisted he never hurt his girlfriend, 22-year-old Cristina Barnea, during an argument at his home last Oct. 30. Barnea told police he pushed and choked her. Chapman admitted he then went to his garage, got a handgun and  fired eight shots into a wall and window. while locked in his garage.

Chapman was never charged. Police cited differing testimonies from those involved and witnesses.

"I learned a lot from it," Chapman said. "The good thing is that's something that is behind me now. I want to focus on baseball, being here with my teammates, having the opportunity to hopefully contribute."

Chapman had been pitching against minor leaguers during extended spring training games in Florida. In the meantime, he also completed the process of becoming a United States citizen, something he said he's very proud and happy about.

"It was a long time in Tampa but I feel great, I feel ready and I'm happy to be here, happy to have the opportunity to help the team," he said.