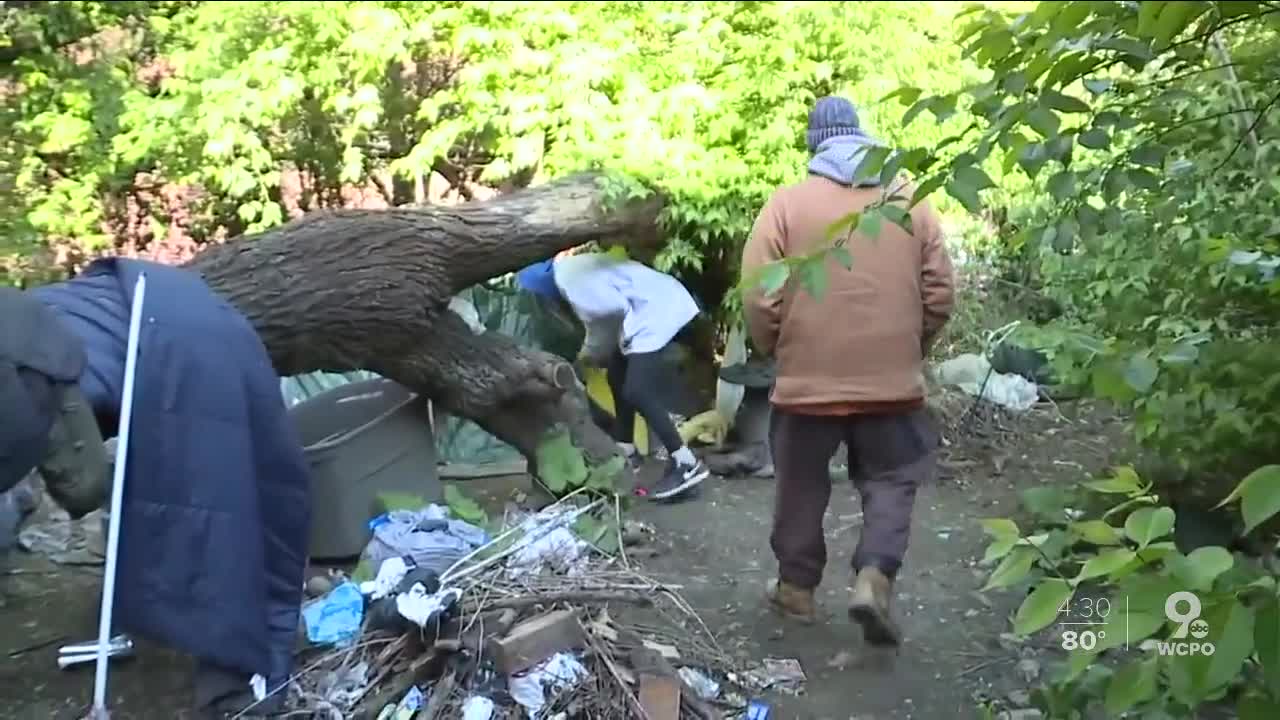 Despite the gradual reopening of the economy and the federal government’s distribution of stimulus checks, families across the region continue to struggle financially. Experts worry that will lead to a spike in homelessness.

CINCINNATI — When George Carter was homeless and struggling with drugs, he turned to City Gospel Mission for help.

“It’s a spiritual organization,” he said. “I really got myself together with God. They put me on the right track.”

Now Carter manages a sober living house and volunteers at City Gospel Mission as much as he can, although the shelter has changed dramatically from when he lived there.

Because of the coronavirus pandemic, City Gospel Mission accommodates only half of its usual 74 guests. The other half are staying in hotel rooms. The nonprofit serves meals in shifts to limit numbers and increase social distancing in its spacious dining room. Employees are working to convert a classroom and lounge into additional bedrooms so they can bring men back into the shelter in a safer, more spread-out way.

Perhaps, but nonprofits like City Gospel Mission are bracing for the storm ahead.

Despite the gradual reopening of the economy and the federal government’s distribution of stimulus checks, families across the region continue to struggle financially.

“The economics are going to create more situational poverty and therefore more homelessness,” said Roger Howell, president of City Gospel Mission. “Now the question is, can we help deal with that in Cincinnati?”

Although larger cities across the country have seen spikes in homelessness in recent years, the number of people staying in homeless shelters or living on the streets in Cincinnati and Hamilton County didn’t change much between 2015 and 2019, according to new data released by Strategies to End Homelessness.

“Most people don’t go from eviction right to the street,” Finn said. “There’s normally a year, year and a half between there where they’re trying to keep themselves off the street. They’re relying on other people for a place to stay. And then when they end up on the street or in a shelter is over a year later.”

‘Everybody in the field is very worried’

That means a year from now, when — with any luck — the Tri-State and the nation are no longer focused on COVID-19, Hamilton County could see its homeless population balloon far beyond the county’s homeless shelter capacity, Finn said.

“Everybody in the field is very worried,” Berg said. “A lot of places were facing very serious problems with homelessness just based on the fact that the rental market doesn’t have enough supply to keep up with rising demands. So rents were going up rapidly.”

Federal discussions about additional rental assistance could help people across the country avoid eviction and eventual homelessness, he said. But it’s difficult to know whether Congress will approve that assistance or how much it would total, Berg said.

“We’ve had homelessness for a long time. It wasn’t acceptable before the coronavirus, and it shouldn’t be acceptable now,” he said. “We’re hoping that people will get used to the idea that we shouldn’t just accept these things. We should do something about it, and we can do things about it.”

One of those things, Finn said, is to fund homeless prevention services.

For years the state of Ohio, the city of Cincinnati and other local funders have given money to Strategies to End Homelessness to spend on prevention. Often people need money just once so they don’t fall behind on rent, get evicted and start the downward spiral, Finn said.

“Prevention is where we could catch those people right now and keep them from ever experiencing homelessness,” he said.

Even before the pandemic, though, the number of people who receive that kind of help has been decreasing, the data shows.

The city of Cincinnati recently cut human services funding by 25% because of its own financial problems brought about by the pandemic. Homelessness prevention was among the programs that got cut, Finn said.

Federal money is flowing to Hamilton County to help address homelessness and prevent evictions, he said, but all that money must be spent before the end of the year.

“These are significant new resources, and it’s great to have them,” Finn said. “But … when I really think we’re going to see the most people coming into the system is going to be a year, year and a half from now. All those dollars are going to be gone by then.”

Meanwhile, shelters across the country have been coping like City Gospel Mission has, Berg said.

Some have moved people into hotel rooms, like many Greater Cincinnati homeless service providers have. Others have housed people in empty dorm rooms, Berg said, while still others are working to persuade property owners to rent properties to homeless people that were formerly used as short-term vacation rentals.

“In a lot of communities, people are trying to figure out how can we use this to make deals with landlords to get homeless people off the streets and out of shelters and get them housed,” Berg said. “The hotel response is not a permanent response. And I think the more people you can get directly into housing, get them back on their feet, the better.”

Finn said he would love for more Hamilton County landlords to rent to people who have been homeless.

“We have a chronic problem with landlords assuming that because someone has been homeless, that they have a drug problem or a mental health problem,” he said. “Almost across the board, that is not the case.”

But Howell said he has faith that when the time comes, the people and corporations of Cincinnati and Hamilton County will be there to help.

“God has been amazing to us. Most of the expenses that have been additional to us because of COVID-19 have been taken care of by donations,” he said. “Our donors, the community has been unbelievably generous to us in the last two, three months – ever since COVID hit.”

Ideally that will continue as the world slowly gets back to something that feels more normal, he said.

“COVID could be a long-term problem if we don’t find a vaccination,” Howell said. “The generosity that people and the compassion that people are feeling now – we’ve gotta remember that in 12 months.”

Information about Strategies to End Homelessness and City Gospel Mission is available online.