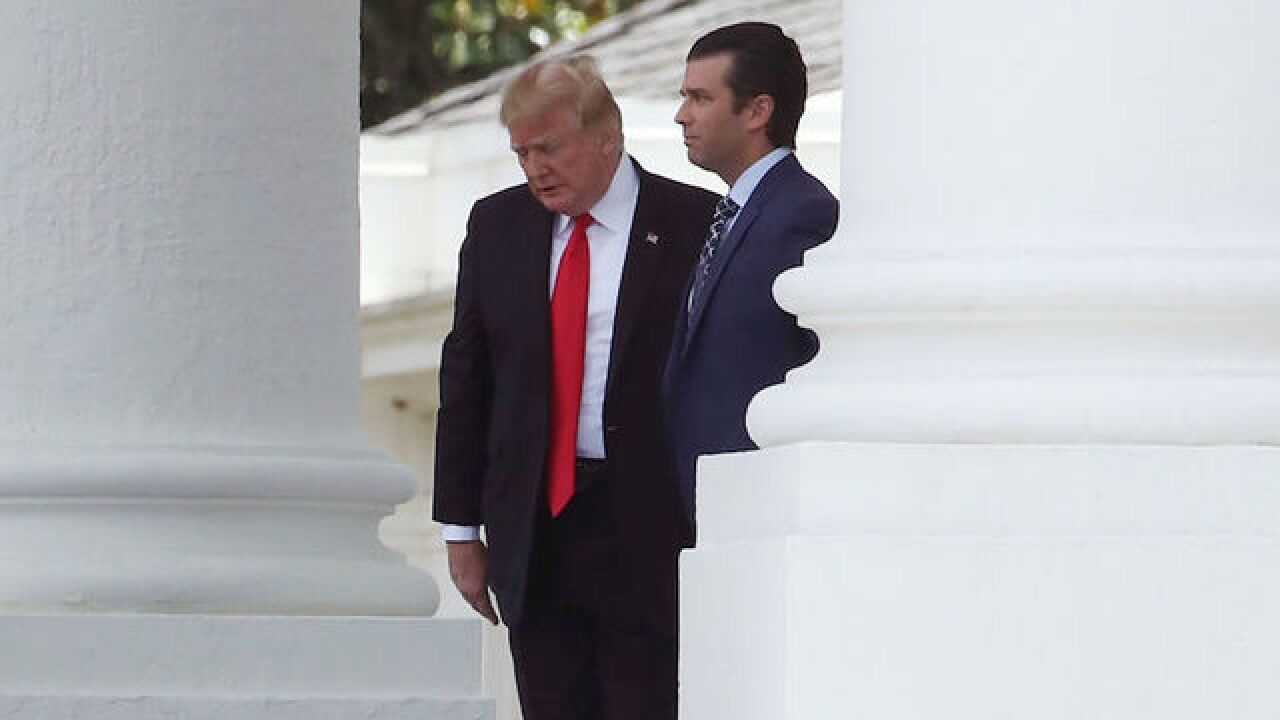 Image copyright 2018 Getty Images. All rights reserved. This material may not be published, broadcast, rewritten, or redistributed.
Mark Wilson
<p>U.S. President Donald Trump and his son Donald Trump Jr. walk out onto the North Portico of the White House while departing on a trip to Wyoming to attend a Make America Great rally, on July 5, 2018 in Washington, DC. </p>

President Donald Trump on Sunday offered his starkest and most direct acknowledgment yet that his son, campaign chairman and son-in-law met with a Russian lawyer to get dirt on Hillary Clinton during the 2016 presidential campaign.

"This was a meeting to get information on an opponent, totally legal and done all the time in politics -- and it went nowhere. I did not know about it!" Trump tweeted on Sunday .

The tweet was not the only time the President has tweeted on the topic, but it does come at a time when the President is increasingly anxious about special counsel Robert Mueller's investigation and how it may impact him and his family.

Here are three things you need to know about the tweet:

1. A stark — but not totally new — acknowledgment

While this was the clearest and most direct acknowledgment by the President about the reason why his son, Donald Trump Jr., accepted the meeting with the Russian lawyer, Trump has made similar statements in the past.

Trump first acknowledged during a July 2017 news conference in Paris that his son was aiming to get dirt on his presidential opponent during the previous summer's meeting at Trump Tower.

"I think from a practical standpoint, most people would have taken that meeting. It's called opposition research, or even research into your opponent," Trump said. "In the case of Don, he listened."

Days later, he tweeted: "Most politicians would have gone to a meeting like the one Don Jr. attended in order to get info on an opponent. That's politics!"

Still, Trump's latest tweet is a stark acknowledgment that his son took a meeting with a Russian lawyer he believed would provide him with "dirt" on Clinton from the Russian government.

And it is also an implicit acknowledgment that the initial statement Trump Jr. released -- and that his father dictated -- was brazenly misleading. It claimed that the primary purpose of the meeting was to discuss adoptions, even though that's not why Trump Jr. took the meeting in the first place.

What makes Trump's Sunday tweet most-significant is the context.

It comes at a time when Trump is increasingly lashing out and seeking to undermine Mueller's investigation. His former campaign chairman Paul Manafort's trial is also underway and getting significant coverage. Additionally, Trump's longtime attorney and former fixer Michael Cohen is said to be prepared to testify that the President knew about the Trump Tower meeting ahead of time, sources with knowledge of the matter told CNN. Also happening, Trump's lawyers are preparing a new response to Mueller after the special counsel offered to reduce the number of obstruction-related questions Trump would be asked by investigators, sources familiar with the negotiations tell CNN.

But perhaps most significantly, his tweet comes as he is privately increasingly voicing his concern, sources close to the White House told CNN over the weekend , about the legal exposure his son may face as a result of the special counsel's investigation. Trump has repeatedly denied he had any contact with the Russians.

Trump's tweet, in fact, came in response to reports from the Washington Post and CNN asserting just that.

"Fake News reporting, a complete fabrication, that I am concerned about the meeting my wonderful son, Donald, had in Trump Tower," Trump wrote in the first part of his tweet on Sunday, rebutting the reports.

3. Trump continues to maintain the meeting was 'totally legal and done all the time in politics'

The President also reiterated on Sunday his assertion that there was nothing improper in his son accepting a meeting with someone he believed to be a Russian government lawyer prepared to deliver him "dirt" on Clinton as part of a Russian campaign to support Trump.

But legal experts have repeatedly said that Trump Jr. could be in legal jeopardy.

It is illegal for campaigns to receive monetary or in-kind donations from foreigners and Trump Jr.'s willingness -- and excitement -- to meet with the Russian lawyer to receive political support from a foreign country could reveal an intent to do just that.

As for the assertion that seeking out opposition research from a foreign country -- let alone an adversary -- is "done all the time in politics," it doesn't hold water. As noted above, receiving an in-kind donation from a foreigner is against federal law.