It's Fiona's 3rd birthday, but we celebrate her every day in Cincinnati. Here's why. 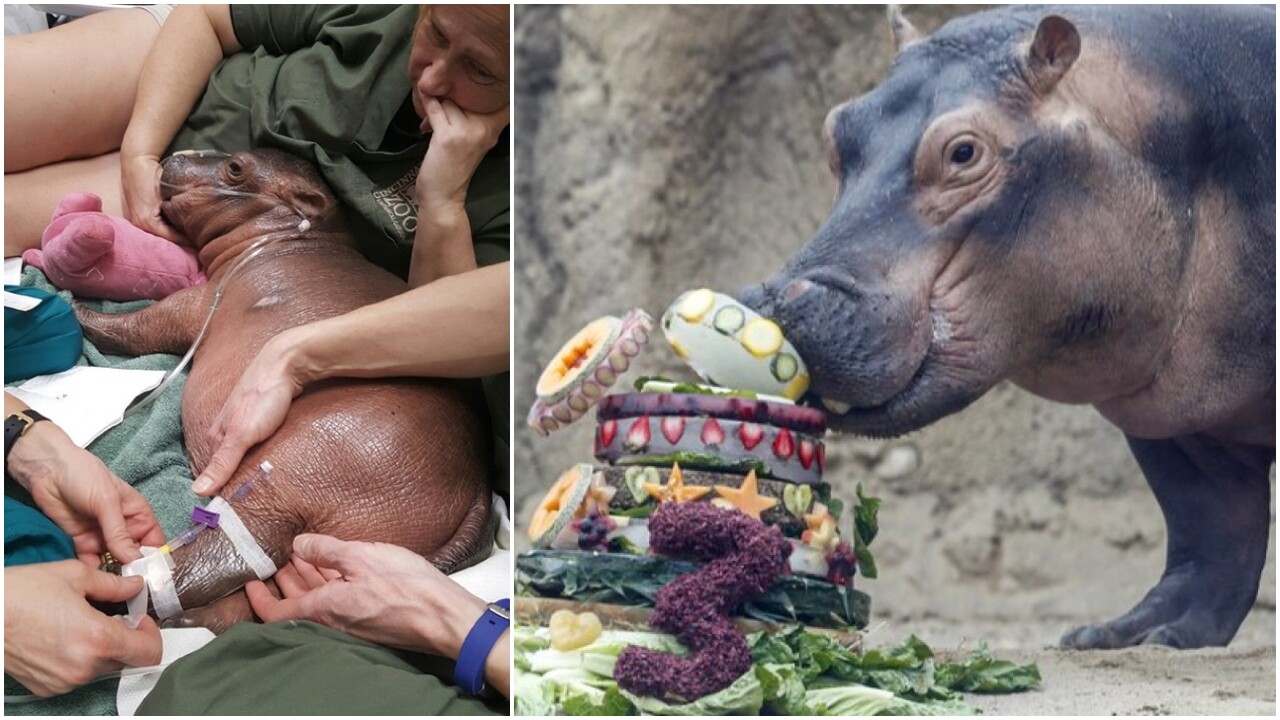 Copyright 2020 Scripps Media, Inc. All rights reserved. This material may not be published, broadcast, rewritten, or redistributed.
Photos courtesy of Cincinnati Zoo
A member of Fiona&#39;s care team holds her as an IV is placed in 2017 (left). Three years later, Fiona enjoys a birthday cake at the zoo.

Let’s be honest, this day is no different than any other day; Fiona has been celebrated nearly every day since she was born.

Her face has been on everything from playing cards to children’s books to T-shirts and kitchenware. Shortly after she was born, Busken made Fiona cookies, Listermann brewed up a “Team Fiona” IPA and Graeter's created Chunky Chunky Hippo ice cream.

Fiona’s life is a miracle. She represents resilience, determination and a will to live. That’s why we love her. That’s why we’ll always celebrate her.

Fiona’s story is also one of love.

When Fiona was born, she was six weeks premature and weighed only 29 pounds; she was 25 pounds lighter than the lowest recorded birth weight for her species. She was so little and weak she couldn’t stand and nurse from her mom, so her care team bottle-fed her.

Fiona’s care team stayed with her 24 hours a day. They held her chest to chest to help her regulate her breathing, they made sure she was getting enough nutrients through feeding tubes and they celebrated every milestone.

Keepers decided to name her Fiona, which means “fair,” because they thought it suited her personality.

A couple weeks later, Fiona took a turn for the worst. But specialists from Cincinnati Children’s Hospital stepped in to help her. Veterinary staff struggled to give Fiona an IV because her veins were so tiny. Children’s Vascular Access Team, a department that often works with premature babies, placed an IV in her leg so she could get the fluids she needed.

Now, the sassy hippo is a healthy 3-year-old. When she’s not busy being an internet sensation, she’s romping around with her mom, photobombing engagement pics and getting snoot scratches from her care team.

Zoo keepers celebrated Fiona’s birthday yesterday with an amazing b-day cake, complete with a red “3” made of beet pulp.

Her cake, served on a bed of romaine lettuce (her fav), had layers of frozen bamboo leaves, cantaloupe and apples shaped with cookie cutters and a dash of sugar and grape juice for flavor.

And y’all, she deserves every bit of it.