With A.J. Green out, Bengals receivers know it's their chance to shine -- and they want to 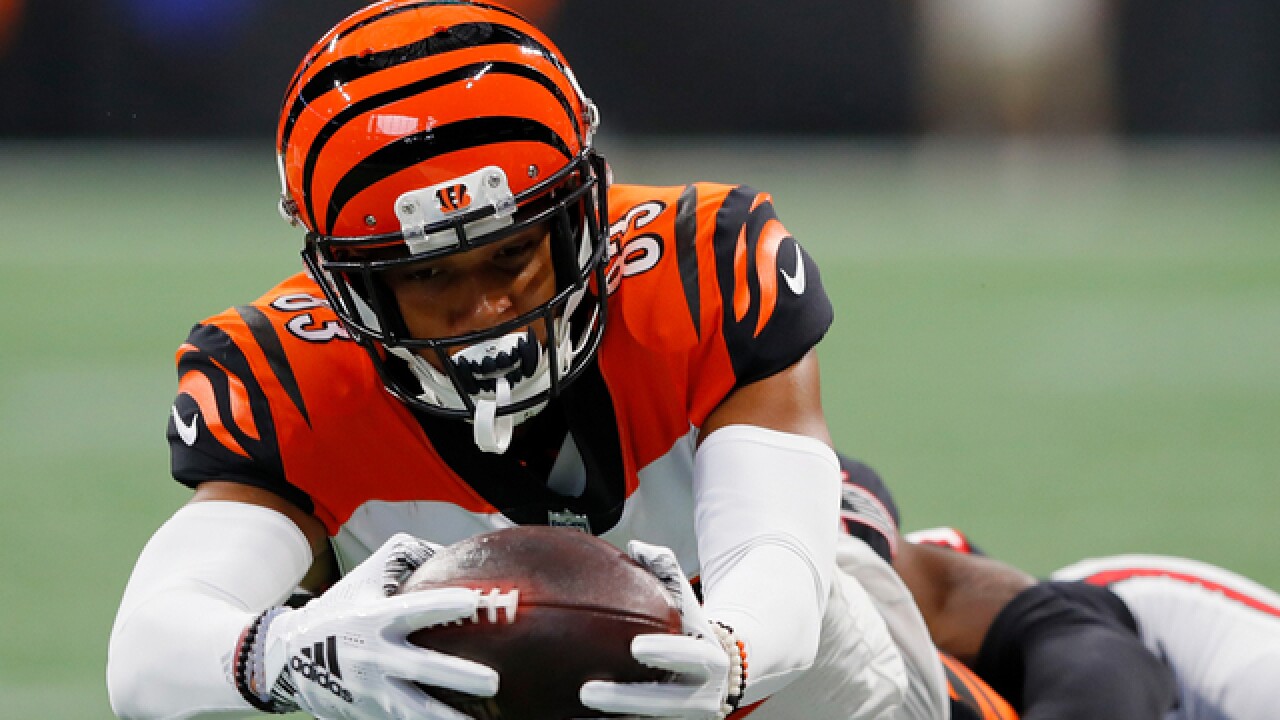 Image copyright 2018 Getty Images. All rights reserved. This material may not be published, broadcast, rewritten, or redistributed.
Kevin C. Cox | Getty Images
<p>Tyler Boyd of the Cincinnati Bengals is tackled by Damontae Kazee of the Atlanta Falcons after a catch during the second quarter at Mercedes-Benz Stadium on Sept. 30, 2018 in Atlanta, Georgia. </p>

CINCINNATI -- Bengals offensive coordinator Bill Lazor likes a chance to be creative with his play calling, but the opportunity to work in some new wrinkles with the injured A.J. Green out doesn't particularly excite him.

The Bengals (5-3) will be without their seven-time Pro Bowl wide receiver Sunday as they host the New Orleans Saints (7-1) at Paul Brown Stadium, and that leaves Lazor with one proven receiver to count on in Tyler Boyd.

Green is week-to-week with a foot injury he originally thought was just a toe jam, suffered on the last drive of the Week 8 game against Tampa Bay.

"I think I'd rather have him," Lazor said Thursday with a laugh when asked if he looked at the current situation as a fun challenge. "I wouldn't think of the word fun. It's just football. It keeps moving, and the most important thing is long-term we have to keep getting better. Somehow we'll look back on this practice with who we had practicing today and it's going to help propel us to what we're going to be later."

Green, who leads the team with 687 receiving yards and six touchdown catches on 45 receptions, has played in 110 of a possible 122 games since the Bengals drafted him fourth overall in 2011, and Cincinnati is 4-7-1 without him on the field.

The former Georgia star most recently missed the final six games of the 2016 season after injuring his hamstring in the first quarter of a game against Buffalo. The Bengals went 3-3 the rest of the way and also lost that game to the Bills, as the offensive production went from averaging 380 yards per game with Green to 326 yards per game without him.

Now, in his absence, Boyd becomes the emphasis of opposing defenses. He's already been seeing some double coverage during a breakout third year, but can expect much more of that Sunday. The 2016 second-round draft pick has 620 yards and five touchdowns on a team-high 49 catches.

"At the end of the day, I'm going to keep my focus and not allow them to make me feel like I'm not going to get open or still continue to be a great player out there," Boyd said. "I just want to do a great job of creating chances for myself to get open and just catch footballs."

If he's not open, Boyd will be drawing coverage away from someone else. Usually that was Green in the past.

For the other receivers, this is the chance they've been waiting for -- particularly John Ross, who is coming back from a groin injury that resurfaced after his return from a two-game absence at Kansas City in Week 7.

Other options at receiver could include rookie seventh-round draft pick Auden Tate, whom Cincinnati signed off the practice squad Monday, and Alex Erickson and Cody Core, who have combined for just 11 catches. No one besides Boyd has more than 19 receptions.

"I believe in the guys always, no matter what," Boyd said. "Since A.J. is down, it opens a large percentage of balls thrown to the next guy, whoever comes in there and does what they have to do. The sky is the limit for whoever wants to come in and take full advantage."

Ross said he and the other receivers have been working all season for opportunities like this. His chances have been limited by injuries to this point, and now it's his turn to step up.

"That's all of our mentality," Ross said. "We don't want to see A.J. go down and be like, 'What do we do?' We know what to do. It's our time to step up, and we definitely have to. Not to put pressure on ourselves, but it's real life and it's our job. It's something we have to focus on and make sure we prepare."

The 2017 first-round draft pick hasn't done much yet this season beyond the two touchdowns he scored. He has seven catches for 79 yards, but isn't complaining about being underutilized even in the games he did play.

Ross took some heat for stopping his routes on two interceptions Dalton threw at Carolina but bounced back to score a touchdown at Atlanta the next week on the same play he pulled his groin.

"I just think it's hard when you've got two guys who are playing out of their mind," Ross said. "You've got A.J. who is going to be A.J. every single year, and you've got Tyler Boyd, who is just blossoming to be one of the best receivers in the league. It's just hard for Andy to say he's going to get the ball to everyone. Especially when we're so hot, wherever the ball goes, it's just like he needs to trust that everybody is going to make plays. They are doing an amazing job, and when it's our turn, we've got to be ready, because you never know. It can change any week."

Cincinnati also could turn more to running back Joe Mixon with the run or on screen passes, but the Saints make the ground attack difficult to rely on, bringing the No. 1 rush defense in the league. Opponents are averaging just 74.1 yards rushing against them.

Lazor said he just has to find ways to keep the offense moving, because when the Bengals do get to the red zone, they are the most efficient in the league at scoring touchdowns. Cincinnati has scored on 20 of 26 trips to the red zone.

He remains confident a Green-less Bengals offense can get the job done, but then again, he has to be.

"I'm totally confident, because that's how you have to live," Lazor said. "If you're calling the play, you can't have any doubt in your mind. You call every play like it's going to work. You just have to believe in it, because maybe they feel what you believe. You've just got to put that on your mind."