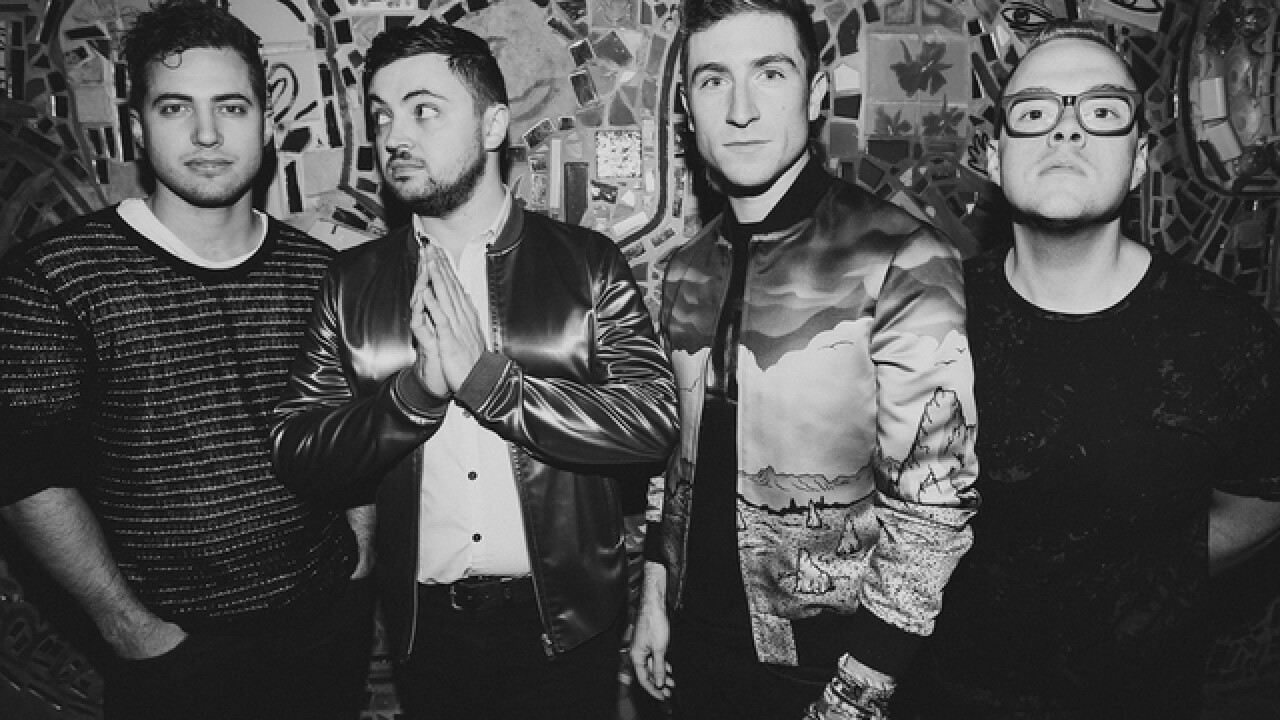 Copyright 2017 Scripps Media, Inc. All rights reserved. This material may not be published, broadcast, rewritten, or redistributed.
<p>Walk the Moon. (Provided)</p>

CINCINNATI -- Whether you’re a die-hard who has been to MidPoint Music Festival every year or a newcomer going for the first time, this weekend’s MidPoint is going to look different than your average fest.

The venerable indie rock gathering — which launched in 2001 as a grassroots event to promote the-then-up-and-coming Over-the-Rhine neighborhood — has moved the entire operation south to a one-block area around the Taft Theatre, with a whole new look and feel.

Following its 2015 purchase by Music & Event Management Inc., a subsidiary of the Cincinnati Symphony Orchestra, MidPoint has fully divested of its traditional Over-the-Rhine base for the first time. It’s concentrating the event in two mid-size venues — the Taft Theatre and Cincinnati Masonic Center. And, after initially announcing a large outdoor stage that was slated to be set up on Fifth Street outside the Taft, organizers said last week that MidPoint would take place fully indoors for the first time in nearly a decade.

“Throughout our exposure to the event, we always felt that one of the things that would improve the experience for everyone was trying to get things to be closer together,” said festival organizer Rick McCarty of the move and consolidation. “So you don’t have to think, ‘I’m watching this show and, oh man, I have to split because I have to get all the way from there to here’ and then worry about if there will be room.”

Like similar festivals — from Austin’s South By Southwest to Nashville’s CMA Fest — part of the allure and frustration of events like MidPoint always has been the mad scramble to get from one far-flung venue to another.

“We think the proximity will be better from a fan and band perspective and hopefully you won’t have to stand in line to get in either,” he said. “Anyone who has the drive will be able to see all the sets.”

Welcoming Walk The Moon back home

The 2016 MidPoint festival drew mixed reviews for its move out of the bars in and around Over-the-Rhine into a pair of parking lots near Pendleton. McCarty said organizers listened to the feedback they got from fans about that shakeup when putting together this year’s event, adding that he is certain the new set-up will make for more memorable experiences.

In light of the new format, fans will get a rare opportunity to see one of Cincinnati’s biggest bands in an intimate setting.

“Shut Up and Dance” rockers Walk the Moon will set up in the Taft for the first hometown show in support of their upcoming fourth album. After taking nearly a year off due to an illness in singer Nicholas Petricca’s family, the band is coming back home for what McCarty promises will be a powerhouse show from “one of the city’s musical ambassadors.”

“It’s a perfect combo for them to come home and finally have a headline performance [at MidPoint],” he said. “Plus, they’ve never played the Taft.”

From Nigeria to New York

Cincinnati fans will get one of the first listens to the band’s new music. Other headliners performing at MidPoint include: The New Pornographers, Broken Social Scene, Frightened Rabbit, Filthy Friends, Valerie June, BadBadNotGood, NoName, Dan Deacon and Seun Kuti & Egypt 80.

The 50-plus MidPoint bands on tap, who hail from around the corner to Scotland, Nigeria, Iowa, Vancouver, Los Angeles, Austin and Brooklyn, will rock four stages with a mix of indie rock, roots, afro-funk, folk, jazz, Americana, soul and hardcore. With that large outdoor main stage gone, they will set up on the main Taft Theatre stage (2,300 capacity), in the downstairs ballroom (500 capacity), in the Masonic Cathedral (820 capacity) and the Masonic Ballroom (800 capacity).

Though the Cincinnati Masonic Center is frequently used for private events, weddings and fundraisers, most music fans likely will have never set foot in the building, which is connected to the Taft by an indoor walkway typically off-limits to attendees. McCarty touted the ability to quickly travel between the buildings as one of the benefits of the new setup, saying the layout this year makes it much easier to manage typically hard-to-control elements such as weather, sunlight, darkness and sound bleed.

“When you’re in a room like the Taft or the Masonic Ballroom, we have experience in those spaces and we know how to manage them effectively,” he said.

McCarty would not share expected attendance numbers, but given the capacity limits for the four venues, which are all general admission, it's likely that MidPoint won't reach all-time highs in the 30,000 range as quoted on the event's official website.

One of the other big changes is that organizers have moved the entire festival to a Saturday-Sunday schedule, after years of a three-night set-up that spanned Thursday-Saturday.

Plans for a kickoff show on Friday at Memorial Hall were nixed after planned headliner Charles Bradley canceled his entire slate of remaining 2017 dates due to a recent cancer diagnosis.

In addition to a variety of food trucks and beverage vendors who will line up outside the Taft, other new elements of the festival this year include a Shake It Records pop-up record fair inside the Masonic, as well as an API poster show curated by Powerhouse.

Information mpmf.com; ATMs on site; free ages 2 and under; rain or shine, one sealed or empty 20-ounce water bottle allowed.