If you love Indian street food, or are curious about it, you need to try one of Dhaba's kathi rolls

You have four more chances this season 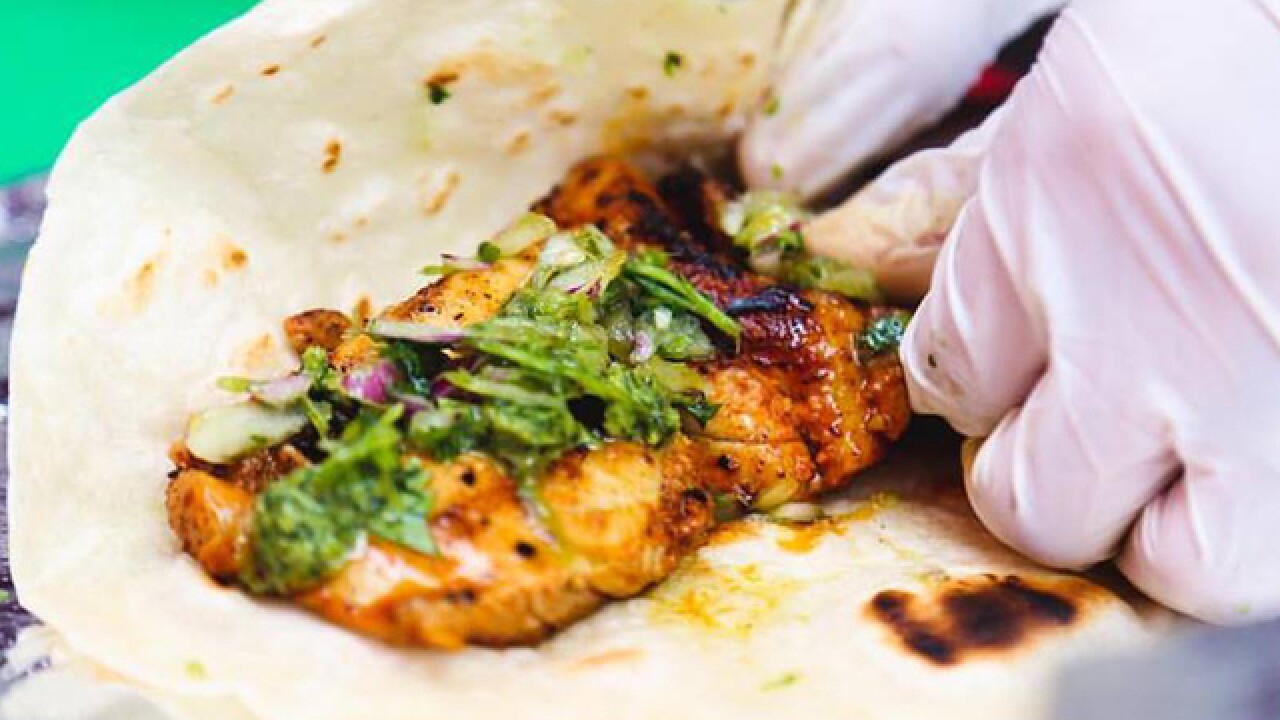 Copyright 2017 Scripps Media, Inc. All rights reserved. This material may not be published, broadcast, rewritten, or redistributed.
Provided
<p>A Procter & Gamble brand manager, his wife and four friends longed to share real Indian street food with Cincinnati, so they created <span data-scayt_word="Dhaba" data-scaytid="30">Dhaba</span> to give us all a taste of <span data-scayt_word="kathi" data-scaytid="31">kathi</span> rolls. (Photo provided by Dhaba)</p>

CINCINNATI -- What happens when four friends get together over drinks? In the case of Rohan Hemani, a Procter & Gamble brand manager, and his friends, they ended up with a question: "What kind of food is missing from the market, and how can I use market research to make the best version of this food, which people will buy?"

The answer was Dhaba, an Indian street food vendor startup based out of Findlay Kitchen, Findlay Market’s incubator kitchen.

In January, Hemani, wife Sayani and friends Uttam Mukherjee and Aakansha Sinha decided that they wanted Cincinnati to get a taste of the street food they were familiar with in India: kathi rolls.

Kathi rolls are paratha, a kind of flat Indian bread similar to naan, that is wrapped around skewers of meat and other savory fillings for a quick meal on the go.

They had only one problem: The four of them had no restaurant experience. What they did have was plenty of marketing experience.

Knowing they needed to test the market's openness to the concept, they launched a Kickstarter campaign to fund what they calculated as the minimum viable product: a pop-up, along with equipment and membership in Findlay Kitchen. Dhaba's campaign ended with 108 backers providing nearly $3,000 in startup costs.

Next, they started cooking the kathi rolls. With the help of friends and family, the group identified three core groups of customers: Indian diners longing for less-Americanized, more familiar versions of Indian favorites (which is tough to find in Cincinnati); people unfamiliar with Indian food seeking an approachable way to try something new; and fans of Indian food looking for new experiences.

Hemani also wanted to keep things simple. Think of the average Indian menu, with dozens of different dishes to choose from and little to distinguish, to the unfamiliar eye, one dish from another. Instead, Dhaba has just four choices: chicken tikka, the best seller, which is grilled marinated chicken; paneer, a soft, Indian cheese (Hemani's favorite); lamb kebab; and aloo, or savory potatoes.

Dhaba has kept its marketing simple, too. Most has come from word of mouth, links to its Facebook page and $10 in Facebook advertising -- quite a difference from Hemani's big budgets at P&G.

That marketing experience comes in handy with recipe development, too.

"There is a constant feedback loop," said Hemani. "It's more instant (than my work at P&G). You can instantly see people's reactions."

If asked, he encourages customers to try the lamb kebab, which gets the best reactions, as it's less common for people to have tried, Hemani said. From customer feedback, he and his team realized that the aloo was too dry, so they experimented with adding red peppers for moisture. Everything has been a cycle of learning and adapting, as well as building relationships with customers, he said.

Dhaba has had three pop-up engagements: two at Findlay Market and one at the Asian Food Festival, where they were a last-minute addition. Hemani said he was overwhelmed by the support: The city quickly issued their food permits, with the help of Findlay Kitchen and Asian Food Festival organizers, and Dhaba constantly had long lines of festival-goers wanting to try its take on Indian food and the $7 rolls.

What's the future of Dhaba? Hemani isn't sure. Mukherjee and Sinha recently moved to Seattle, which could lead to a Seattle Dhaba outpost. Hemani said that although he hasn't nailed a business model, he wants to focus on affordable prices, a small menu, relationship-building with repeat customers and maintaining Dhaba’s traction and feedback loop.