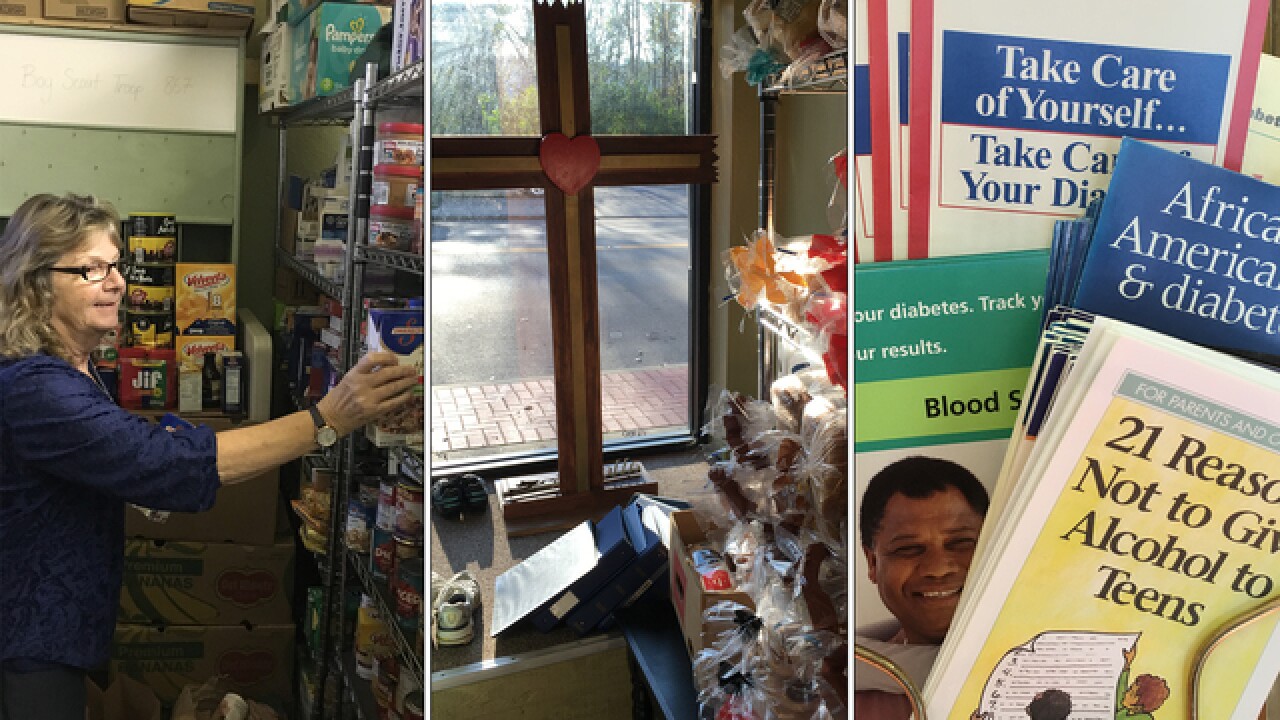 Copyright 2017 Scripps Media, Inc. All rights reserved. This material may not be published, broadcast, rewritten, or redistributed.
Allison Cohen | WCPO contributor / WCPO composite
<p>LEFT: Joann Garcia stocks the shelves at the Christian Outreach and Wellness Ministry. CENTER: A wooden cross is near the window and by the ministry’s stash of bread. RIGHT: Health literature is provided at the ministry.</p> 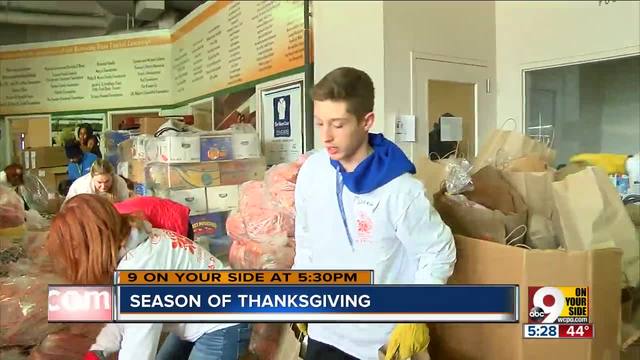 CINCINNATI -- Thanksgiving is almost here, and people all over the country are taking the time to remember why they’re grateful. As people reflect on the gifts they’ve been given, they also remember those who may not be as fortunate.

The Freestore Foodbank serves approximately 280,000 people who struggle with food security in 20 counties in three states. Neighborhood pantries use the resources at the Freestore Foodbank to stock their shelves. Families and individuals can also take advantage of the Freestore’s “wrap-around services” aimed at stabilizing lives through job training and other assistance.

Kurt Reiber, president of the Freestore Foodbank, said that there are a lot of misconceptions about who uses the food pantry.

“Many people have the idea that the families we serve aren’t working or looking for a handout; the reality is that close to 75 percent of families are working but not making enough money to make ends meet,” Reiber said.

Last year, the Freestore Foodbank provided 25 million meals to its service area. Reiber said the holidays are their busiest time but said to remember that food security isn’t seasonal.

Neighborhood pantries can definitely appreciate that the needs of their community are bigger than any single holiday.

For over 30 years, the Christian Outreach and Wellness Ministry (COWM) has been much more than a food pantry. Started in Mount Washington in what was then Mount Washington Church of Christ, COWM began its ministry after recognizing the needs that existed in the East End.

The pantry began as an actual pantry in the church, although volunteers quickly realized the location was not ideal.

“It was expensive to ride the bus to Mount Washington, especially if you had kids,” said Jennifer Cowgill, executive director of COWM. “Then you had to cart your groceries back to the East End on the bus.”

Since then the pantry has grown and moved five times, currently housed at 3710 Eastern Ave. in the heart of Columbia Tusculum. The pantry is open two days a week from 3:30 p.m. to 6:30 p.m. Cowgill estimates they serve approximately 100 families a month, providing fresh, organic produce, shelf-stable groceries, milk, meat and desserts.

However, as the name suggests, COWM offers much more than groceries. The wellness portion of their ministry is an integral part of its services. Clients can receive toiletries, common medicines and first aid, as well as laundry and dish soap.

“When we started, we were the only wellness ministry we knew about in the Tri-State,” said Cowgill.

With the help of a volunteer nurse, COWM developed several health initiatives in the East End. The ministry pioneered the concept of a “diabetic bag” for clients struggling with diabetes. The bag includes groceries with reduced carbohydrates and other healthier options.

“When we started, we only had four diabetics, now we have 179 in the East End and Mount Washington,” Cowgill said.

COWM also put on several health fairs in the neighborhood, which introduced Ann Lukey to the ministry. Lukey now acts as COWM’s social worker, helping clients connect to social benefits while they wait for their grocery order to be filled.

“Our clients in the East End lack the basic needs for everything,” Lukey said. “Finances, rent, utilities, transportation. Everything.”

Lukey said that the clientele often struggle with addiction issues and criminal records. Many of COWM’s clients experience "the revolving door" of the criminal justice system. When they find themselves back in society after a stint in jail, they will often seek out the services at COWM.

“We’re their first stop when they get out,” Lukey said.

Like many food pantries, COWM provides extra support to the East End during the holidays. Since they have personal connections to people in need in the neighborhood, COWM coordinates the delivery of Thanksgiving and Christmas baskets to families. The Thanksgiving basket, sponsored by a local church, provides 65 families with everything they need to have a Thanksgiving meal.

“Turkey, stuffing, gravy, sweet potatoes, green beans, brownie mix and a can of cranberries,” said Lukey, admitting with a laugh that cranberries were pretty unpopular. “We had five cases of cranberry sauce, and we still have some from last year.”

Canned food drives can sometimes give people an excuse to clean out their own pantries and donate things they haven’t used. Food pantries are then stuck with items that their clients won’t want or are unable to use.

Some of the most popular food items with clients at COWM are rarely donated.

“Cereal is a big item, and we try to have it, but it’s expensive. Baked beans and canned fruit are popular,” said Cowgill.

To help with daily tasks, COWM relies on the help of 10 to 12 committed volunteers. Lukey said that the network of volunteers to make COWM happen is much larger.

“There’s a lot of behind-the-scenes stuff that has to happen, so really we have 60 to 70 volunteers,” Lukey said. “There are people who buy toys year-round. We have people who pick up at the Freestore Foodbank; we have people providing money for rent.”

Apart from providing for the clients’ physical needs, the volunteers at COWM often give emotional support for their clients. When clients find themselves at their lowest places, they don’t call 911 -- they call COWM.

“Over the years, we’ve had 13 calls from people threatening to commit suicide,” Cowgill said. “One of the calls we had was way before cellphones. All I could do was keep the person on the phone while one of our volunteers called 911. I kept them on the phone until the life squad came through the front door. I was terrified the whole time that they would hang up.”

The support goes both ways as clients often stop in to check on Cowgill, Lukey and other volunteers.

“My granddaughter had eight eye surgeries by the time she was in first grade. After one of the surgeries, a client called to check up on her. I was blown away by that,” Cowgill said. “We always think of ourselves as the caregivers.”

Lukey said that clients show their gratitude for COWM in their own ways -- some big, some small.

“A couple months ago, we had a mother and daughter come in with a big box of school supplies and other things. I didn’t recognize them,” said Lukey. “She said, ‘You helped us several years ago when we were in a tight spot, so we’re just repaying you.’ ”

The volunteers at COWM often get personally involved with the clients. When one woman finally left a violently abusive husband, volunteers ensured she had everything she needed to succeed. Cowgill’s husband, Gary, fixed up an old car so the woman could start taking college classes. There was one small problem.

“She had never driven in her life,” said Cowgill. “So, the volunteers took turns teaching her to drive.”

Now the woman has an associate’s degree, an excellent job and owns a home in Oakley.

“That whole family completely rounded that corner,” said Cowgill. “They needed help that the government couldn’t provide. There aren’t many happy endings in what we do, but when you get one, you praise God for it.”