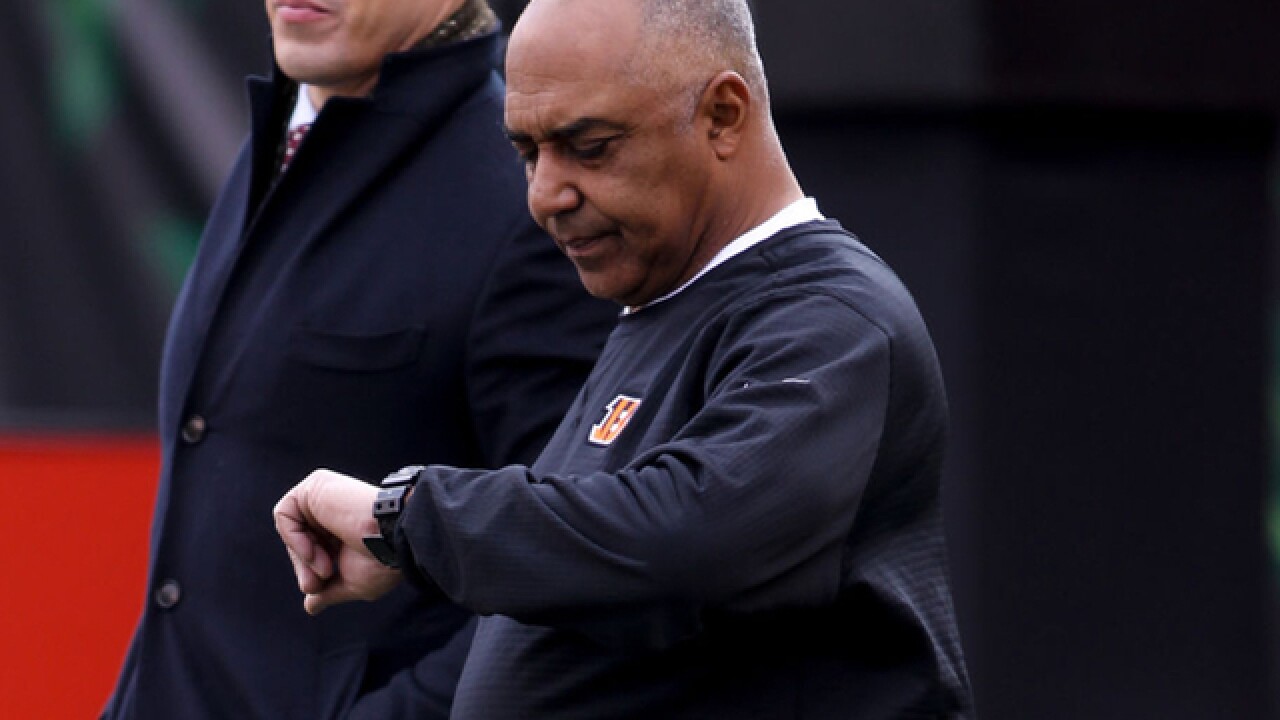 Any loss to the Chicago Bears would have been bad for Lewis’ future, but Sunday’s rout was beyond ugly — arguably the worst loss of the Andy Dalton-A.J. Green era.

Both Dalton and Green contributed to the debacle. Dalton was 14-for-29 for 141 yards with a touchdown and an interception before being pulled for AJ McCarron. Green had a couple of drops and a fumble.

The loss to Pittsburgh last week pretty much ended the Bengals’ season as far as meaningful games, but fans probably expected to see some semblance of effort for their ticket price.

But Who Dey Nation didn’t get any of that from the Bengals in a 33-7 loss to the Chicago Bears. That’s right: A 26-point loss at home to one of the dregs of the NFL.

Lewis did not question his team’s effort, but afterward he had the look of man who was stunned by what just happened.

The players echoed that.

“I’m shocked,” Green said. “We had a good week of practice, coming off a tough loss Monday night. But I feel like we were prepared, ready. It was one of those games. We couldn’t get anything going.”

Lewis is in the last year of his contract. He was dealt a tough hand when the Bengals allowed Andrew Whitworth and Kevin Zeitler to walk, and the Bengals are thoroughly beat up — six starters missed Sunday’s game. But they were playing the Bears, who came in 3-9 and were playing a rookie, Mitchell Trubisky, at quarterback.

Trubisky came in with a 76.4 quarterback rating. He put up a 112.4 rating against the Bengals. He seemed to have his pick of open receivers on nearly every play.

“There were a lot. We didn’t get things done,” Lewis said. “We had some new people, some moving parts. It was not very good.”

Losing to a bad team is one thing. Not being competitive with a bad team is another. The stands were far from full at the start, and the place was mostly empty by the time the fourth quarter started.

“I’m at loss for words,” Lewis said. “Our football team, I thought, had a good week of preparation. We did not play close to the kind of football we had to win the game.”

That was true pretty much from the opening kickoff.

“We hurt ourselves early on with penalties and errors from the kicking game on, our failures to capitalize on things offensively, to get stops on defense,” Lewis said. “I know we had lot of different guys in there. That’s no excuse. We didn’t play well enough to win today.”

Again, Lewis didn’t have a problem with his team’s effort.

“I don’t think there was anything wrong with the effort,” he said. “Just our ability to complete the task … we didn’t get it done.”

Mike Brown rarely bows to the whim of fans, but he has to sense that it’s going to be tough to sell tickets if he doesn’t make a big move.

Lewis does deserve some credit. He lifted the Bengals out of the Lost Decade of the 1990s. He made the team relevant again. But you’d think a strong finish would be necessary for him to get another year.

If the Bengals had won and gone 9-7, he would have saved his job, in my opinion. But Sunday made you think the Bengals could lose out.

You can’t bring Lewis back after a 5-11 year, can you? Brown, of course, can do whatever he wants. He is the one vote that counts at Paul Brown Stadium.

The scary thing on Sunday was Lewis thought his team was ready.

“They had had a good week of focus and preparation,” Lewis said. “We didn’t go out there and handle the movement and changes very well, on defense particularly. We had some good runs. We weren’t able to to sustain things by completing it. We were a touch off in the first half.”

That’s an understatement. Jordan Howard averaged 6.4 yards a carry and racked up 147 yards. Tarik Cohen had 80 yards on just 12 carries.

“We didn’t get off the blocks early in the game,” Lewis said. “We were staying glued to them. They were kind of grabbing us. We weren’t separating. When we separated, they got called for some penalties. When we didn’t separate early, we expected it to happen.

“There were too many plays for me to remember each one.”