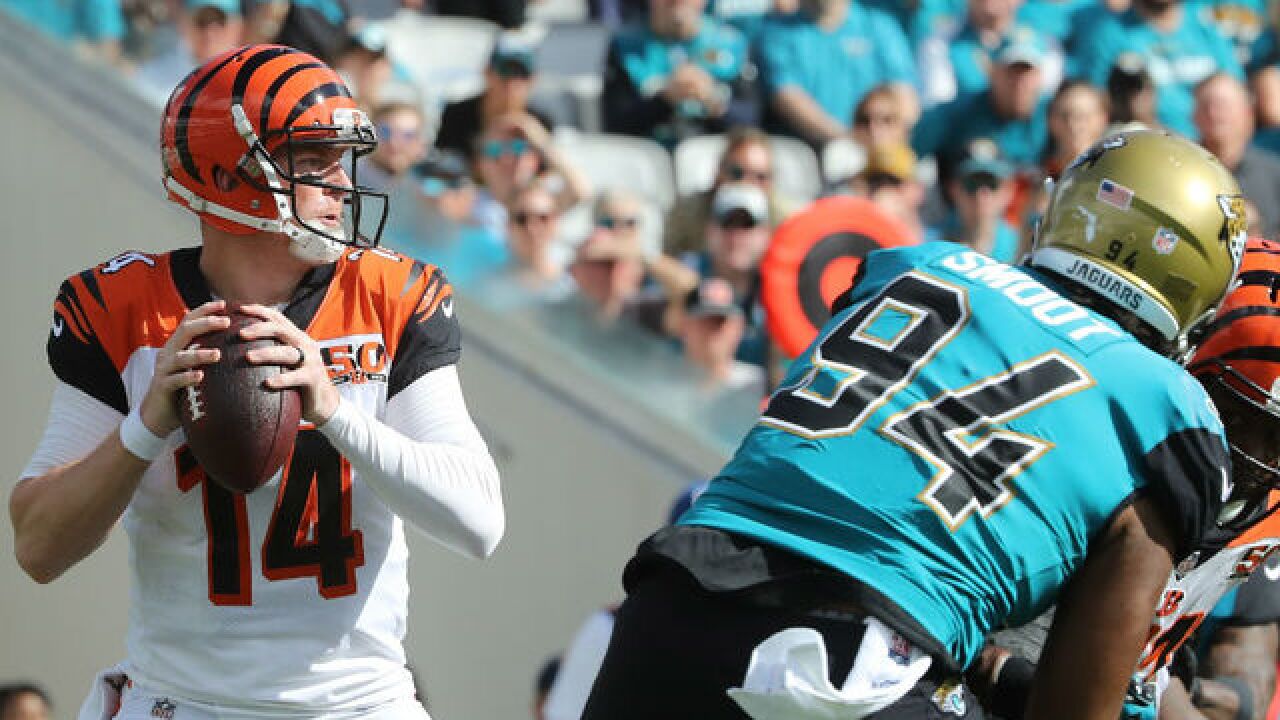 Image copyright 2017 Getty Images. All rights reserved. This material may not be published, broadcast, rewritten, or redistributed.
Sam Greenwood | Getty Images
<p>Andy Dalton looks to pass against the Jacksonville Jaguars in the first half of their game at EverBank Field on Nov. 5, 2017. (Sam Greenwood/Getty Images)</p>

CINCINNATI -- The coordinator bump is gone.

In the three games after the Bengals changed offensive coordinators, the offense showed signs of life and put up good numbers.

Bill Lazor in, Ken Zampese out seemed to just what the Bengals needed.

That's not so much the case anymore.

Consider: In the first three games after the change, the Bengals averaged 346 yards of total offense and 25 points a game. In the last three weeks, they averaged 201 yards and 11.6 points.

The 23-7 debacle at Jacksonville Sunday was particularly discouraging. The Bengals racked up a total of 148 yards and scored one touchdown. They were shut out in the second half and had 31 total yards.

The Bengals, who go to 5-3 Tennessee Sunday, are once again on the precipitous of oblivion. One more loss for the 3-5 squad and this season is toast. And that's taking the optimistic tone.

The players and coach, as you might expect, say it's just a matter of execution to fix the offense.

"There's different things you can do," quarterback Andy Dalton said. "At the end of the day, we've got to execute."

You could argue that after eight games, it's not a matter of execution. It's a matter of the players -- particularly the offensive line -- not being good enough.

Things were further complicated when right tackle Jake Fisher was placed on injured reserve with an undisclosed illness. Veteran Eric Winston replaced Fisher on the roster. Winston, cut in the final roster trim, probably has some ideas about what ails his team, but he chose not to share them.

"I'm not going to get into what I think is the problem," Winston said. "I don't think that matters that much. You've got to be part of the solution. I know this: There's 53 guys on the roster. It's never one guy holding everyone back. You've got to take ownership of where we're at and go forward."

Here's where the Bengals are at: They can't run the ball (an NFL-worst 72.3 yards a game). The fact that they can't run makes Dalton vulnerable to the pass rush.

Complicating things further is total lack of wide receiver alternative to A.J. Green. The only good news for the Bengals is Green was not suspended for his fight with Jacksonville's Jalen Ramsey.

"When we go and look at what we need to do better, we've got to spread the ball around," Dalton said. "We've got to get our guys involved. Obviously, A.J.'s a big part of that. It's not like we don't want to throw it to him."

It's telling that when Green was ejected versus Jacksonville that rookie John Ross, the team's No. 1 pick, was not available. He was healthy but inactive -- again. Lewis didn't make it sound like Ross will be a factor anytime soon.

"You guys ask this same question every week," Lewis said. "John has had three weeks of practice now. Let's let him practice and let's get him comfortable playing football again before we put him back in there. When he knows what to do and how to do it all the time, and when he can play productively, then he'll play fast, he'll play with confidence. But he wouldn't be very confident now."

The Bengals had the same 3-5 record after eight games in 2012. They finished that year 7-1 and made the playoffs. They probably need to go 1-0 first.

"You can look at what's happened before," Dalton said. "The biggest thing we have to worry about is just worrying about this week. And that's the mentality you have to take. You can't do anything unless you win this week. This is an important game for us. That's the goal.

"As you apply what we do to the opponents, there are obviously 11 moving parts, and we have to be as together as we can," Lewis said. "Offensively, though it didn't seem like it, we progressed in some of things we thought were important. We have to do better, as we were still obviously off and not all together exactly the way we would like to see it. We didn't convert the third downs, we miss a ball downfield, we have penalty the next drive out, and we set ourselves back. Those are things we have to correct and overcome. The way to overcome it is to -- when you have an opportunity -- make a good catch, make a good run, make a good play or whatever it may be."

The players used that line as well.

"It's a play here, play there," offensive tackle Cedric Ogbuehi said. "We've got to come together as a group. It starts this week. We can't go back. We've got to go forward.

"It's execution. All 11 guys do your job. Beat your man. That's the No. 1 priority to coming into this game."

We've heard that before. A well-executed win would make it ring true.