Fay: Bengals' chances against Pittsburgh depend on defense 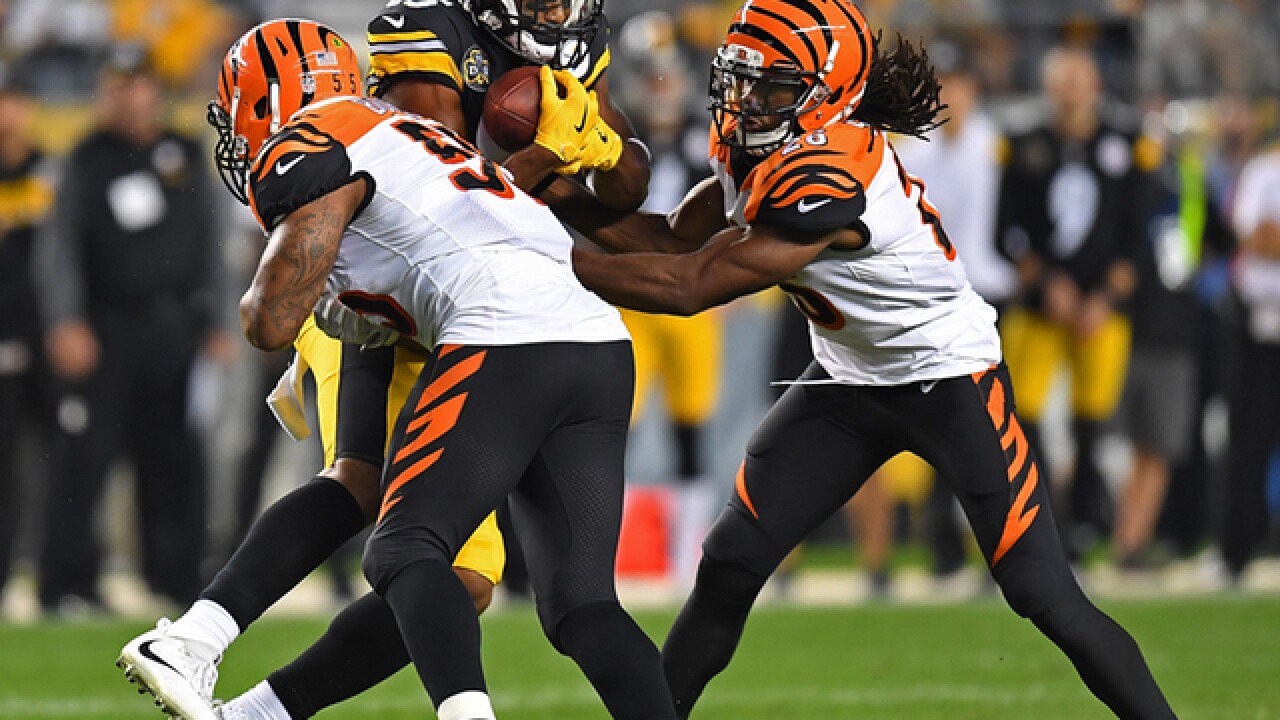 Image copyright 2017 Getty Images. All rights reserved. This material may not be published, broadcast, rewritten, or redistributed.
Joe Sargent
<p>PITTSBURGH, PA - OCTOBER 22: Xavier Grimble #85 of the Pittsburgh Steelers makes a catch before being tackled by Vontaze Burfict #55 and Josh Shaw #26 of the Cincinnati Bengals in the second half during the game at Heinz Field on October 22, 2017 in Pittsburgh, Pennsylvania. (Photo by Joe Sargent/Getty Images)</p>

CINCINNATI — At one time, it was easy to explain the difference between the Bengals and the Steelers.

The difference in the Marvin Lewis era is less easy to explain. The Steelers still own the Bengals. But the talent level is much closer.

A quarterback, of course, is the reflection of his team, i.e., he can not win games on his own.

But, again, in the case of both Dalton and Palmer, they played significantly worse against the Steelers than the rest of the league.

Palmer has moved on. Mostly what he’ll be remembered for as a Bengal against the Steelers is getting his knee wrecked by Kimo von Oelhoffen in the 2005 playoff game.

Dalton still has time to salvage himself against the Steelers, starting Monday night when the Steelers come to town. He realizes there’s only one way to do that: win. Dalton is not one to overanalyze. He is strictly a one-game-at-a-time guy. He looks at this game as more of an opportunity to stay in the playoff hunt than a chance to get the Pittsburgh monkey off his back.

“We want to win,” Dalton said. “For us to get where we want to be at the end of the year, this one is really important for us. We’re playing a good team. To win this one would mean a lot for where we want to go — also to show what kind of a team we are.”

Dalton has had a lot of close calls against the Steelers. Five of his 10 losses were by one score.

“Every time we play them, it’s been a good game,” Dalton said. “It comes down to the fourth quarter. They’ve been tough games, hard-fought games. That’s why we hear about it. They’ve a really good team.”

The Bengals' best chance to win Monday may depend on what their defense can do against Roethlisberger. He has had seven games against the Bengals in which he had a QB rating under 75. The Bengals won five of those.

The Steelers haven’t sacked Dalton a great deal — 24 times in the 13 games — but their defense presents a challenge.

“They know what they’re doing,” Dalton said. “They put guys in different spots and they’re always around the football. They try to take away all the easy throws and easy completions. They make you hold on to the ball a little longer and things like that to try to disrupt your game.”

The cast and coordinators change for the Steelers, but the defense has been solid.

“They’ve been pretty consistent on defense over that time,” coach Marvin Lewis said. “(But) they continue to change it and tinker with it and make their revisions all the time and show a different look than they did the previous weeks.”

Dalton stays above that.

“You can’t worry about that stuff,” Dalton said. “You see some of it. Some I don’t even know about. You can’t let that get into it. They can do what they want. It doesn’t affect us.”

But Dalton understands how much Bengals fans want to beat Pittsburgh.

“I feel like we’ve had our share of being at the top of the division,” he said. “That’s why there’s so much put into. It’s a divisional game, too. There’s a lot importance around this city and this area when we play them.”