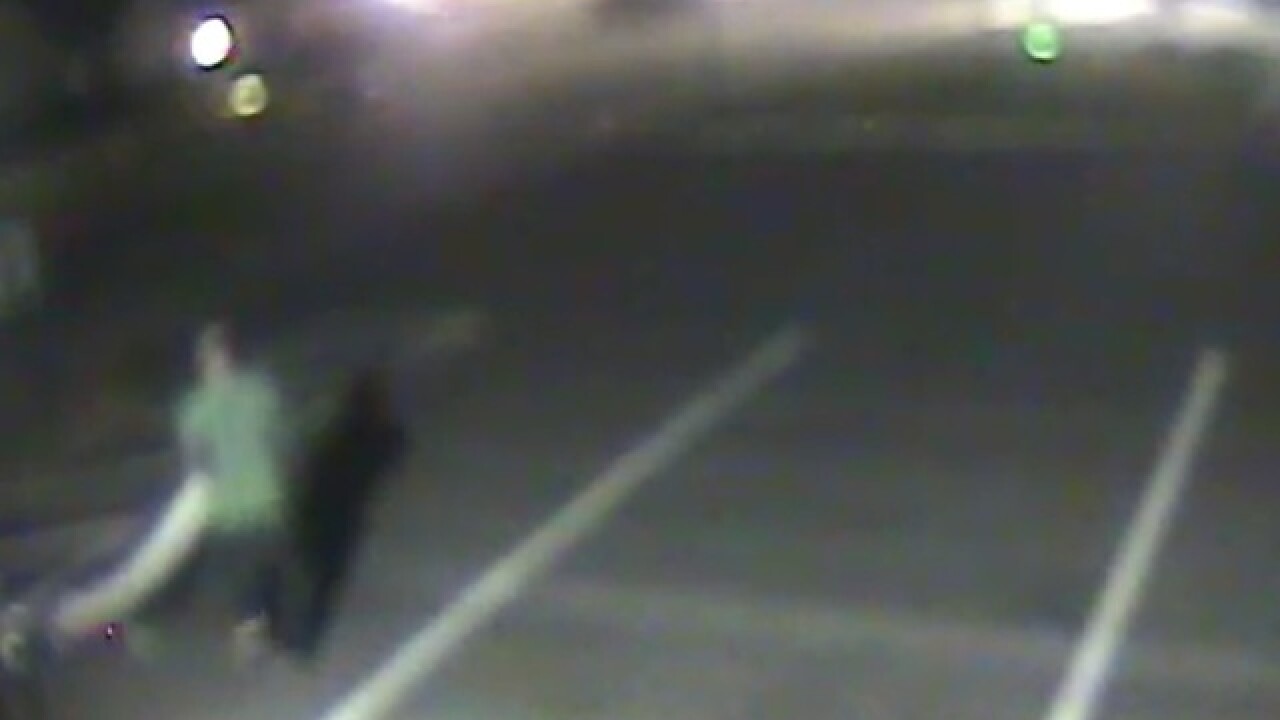 Copyright 2017 Scripps Media, Inc. All rights reserved. This material may not be published, broadcast, rewritten, or redistributed.
<p>ANDERSON TOWNSHIP, OHIO. Aug. 23, 2015. A surveillance camera at the Hamilton County Sheriff's District Five station recorded Deputy Donald Fore moving a plastic parking barrier. His appearance and slurred speech showed he was "highly intoxicated" and unable to control himself, according to an internal memo. It appears he was off duty at the time.</p>

HAMILTON COUNTY, Ohio -- Deputy Bobby Colwell was drunk and causing a scene at Froggy's in Monroe last April, records show. He told police he was intoxicated, disorderly and had two knives -- and they should arrest him.

One officer told Colwell an arrest would hurt his law enforcement career.

According to a police report, Colwell replied: "It's Hamilton County. I won't get fired."

Colwell was arrested, booked into the Butler County Jail and pleaded guilty to disorderly conduct. But as he predicted, Sheriff Jim Neil did not fire him. In fact, Neil didn’t even suspend the six-year veteran.

An I-Team investigation found six Hamilton County sheriff's employees -- five deputies and one civilian -- have been charged with OVI since Neil took office in 2013. Two were suspended. Four received written reprimands. No one was fired.

Two law enforcement experts, one a civilian and the other a retired police chief, said the sheriff’s discipline when it comes to drunken deputies doesn't go far enough.

"It's sends a message that you can do anything you want and nothing bad will happen," said Christine Cole, vice president and executive director of the Crime and Justice Institute. Her organization provides nonpartisan policy analysis, consulting and research on public safety.

Lax discipline, she said, could have larger ramifications.

"It's really hard for the community to trust the police if the police can't even trust the system in which they work ... to be consistent and just and have integrity," Cole said. "And it seems to me that there's a lack of that in this agency.”

RELATED: Is punishment for excessive force also too lenient?

The I-Team shared the six employees' personnel files with Jeff Witte, who retired as chief of the Woodlawn Police Department. A 35-year veteran of law enforcement, Witte is a volunteer with Mothers Against Drunk Driving. Witte said if any officer is arrested for drunken driving or convicted of a misdemeanor, he believes that officer should be suspended or fired.

"It's surprising that you found so many cases of employees that have violated the law, especially involving alcohol," he said.

Neil declined several requests for an interview.* Through spokesman Mike Robison, he issued a statement:

"We take all disciplinary matters very seriously. We follow our rules and regulations, policies and procedures, as well as the contracts of the employee bargaining units. After vetting each situation and considering all factors we feel we reach the appropriate level of discipline."

The I-Team approached Neil as he left a public meeting Monday in an attempt to get him to respond to specific questions. He only referred to his comment.

Three deputies -- Donald Fore, Walter Brown and Justin Hunt -- have been charged with OVI twice since they started working for the sheriff's office.

Yet despite the repeat offenses, Neil did not suspend Brown and Fore for their second OVI arrests. Hunt was arrested just a few weeks ago on his second OVI charge during the past three years. The sheriff's office declined to reveal if Hunt has been disciplined. A traffic citation shows he was also going 78 mph -- 23 mph over the speed limit.

When Fore walked up to a Hamilton County sheriff's station on Aug. 23, 2015, he picked up and moved a plastic parking barrier.

It was about 12:46 a.m., and it appears Fore was off duty. The station, District Five, serves as a base of operations for deputies in Anderson Township.

Fore's appearance and slurred speech showed he was "highly intoxicated" and unable to control himself, according to a memo from Lt. William Rarrick. Fore refused to put the parking barrier back in place, then became belligerent with a higher-ranking officer and chest-bumped him, Rarrick's memo says.

Fore yelled and used profanity at other officers trying to get him home, the memo says, and he refused the orders of a superior officer.

At the time, Fore was on court-ordered probation after he was found guilty of operating a vehicle under the influence. It was his first OVI conviction but second OVI arrest within four years. An internal investigation found Fore's action "could have supported a criminal charge."

Deputies convinced Fore to leave the station on Beechmont Avenue. Fore lived nearby and had walked there. But Rarrick said he showed up again, still intoxicated, and sat in the station's briefing room. Fore punched two walls before he left again, Rarrick wrote:

"Your actions were embarrassing, disgraceful, and impaired the operations of District Five on the night in question. Instead of providing service to the citizens of Anderson Township, they had to convince a drunken officer to stay home and not come outside where you were a potential risk to anyone who encountered you."

In disciplinary reports, higher-ranking officers called Fore a liability and questioned if he should even be a deputy. The sheriff, based on a recommendation from Chief Deputy Mark Schoonover, suspended Fore 10 days without pay for conduct unbecoming an officer.

"ANY FURTHER SUSTAINED DISCIPLINARY ACTION MAY RESULT IN TERMINATION" is written in large, bolded, underlined type on Fore's notice of suspension.

In some cases, Neil had ample warning.

Corrections Officer Kenneth Payne's personnel file shows he's had ongoing problems with alcohol abuse. He reported to work intoxicated twice in 2015, his personnel file states. In one case, third-shift supervisor Sgt. Aaron Oberlander wrote Payne's blood alcohol content was slightly under the legal limit; in another case, it was just shy of twice the legal limit. In both instances, Payne had driven himself to work. He was not arrested.

After the second time, the sheriff suspended Payne for three days. He also was ordered to receive alcohol treatment before he could return to work. Payne checked into an in-patient program for alcohol dependence, Oberlander noted.

Oberlander wrote to Neil with his concerns on March 5, 2016.

"I have received a number of complaints from his co-workers which to date I had dismissed as personality conflicts, but may also be related to his drinking," his letter said.

He described Payne as a "huge liability" and said the sheriff should consider firing him.

"I recommend that at a minimum his police powers be suspended indefinitely," Oberlander told Neil.

Six months later, on Sept. 5, records show Payne reported to work intoxicated again. Payne, assigned to third shift, said in a signed statement that he'd drank four margaritas at lunch that day. He said he stopped drinking at about 3 p.m. and overslept, waking at about 11:06 p.m.

According to another third-shift supervisor, Sgt. John Stevens, Payne also said he'd had a few shots at lunch.

He showed up to work at about 11:45 p.m., at which point another third-shift supervisor, Sgt. Jason Elliott, noticed he seemed to be intoxicated.

The sheriff's office gave Payne a breath test 2 hours and 19 minutes later. His blood alcohol content was 0.07. By that point, more than three hours had passed since his shift began. Payne was suspended 10 days.

*The I-Team asked Neil for an interview multiple times:

Jeff Witte, a retired Woodlawn police chief with 35 years in law enforcement and a volunteer for Mothers Against Drunk Driving, said the I-Team's findings were surprising. When police are arrested for drunk driving, she should be suspended, he said.

"It's surprising that you found so many cases of employees that have violated the law, especially involving alcohol," Witte said.

When the I-Team showed Payne's records to Pitte, he called them "very concerning."

Criminal justice expert Christine Cole said it's important for the system to be enforced concistently.

"It's really hard for the community to trust the police if the police can't even trust the system in which they work, to be consistent and have integrity," Cole said. "It seems to me that there's a lack of that in this agency."