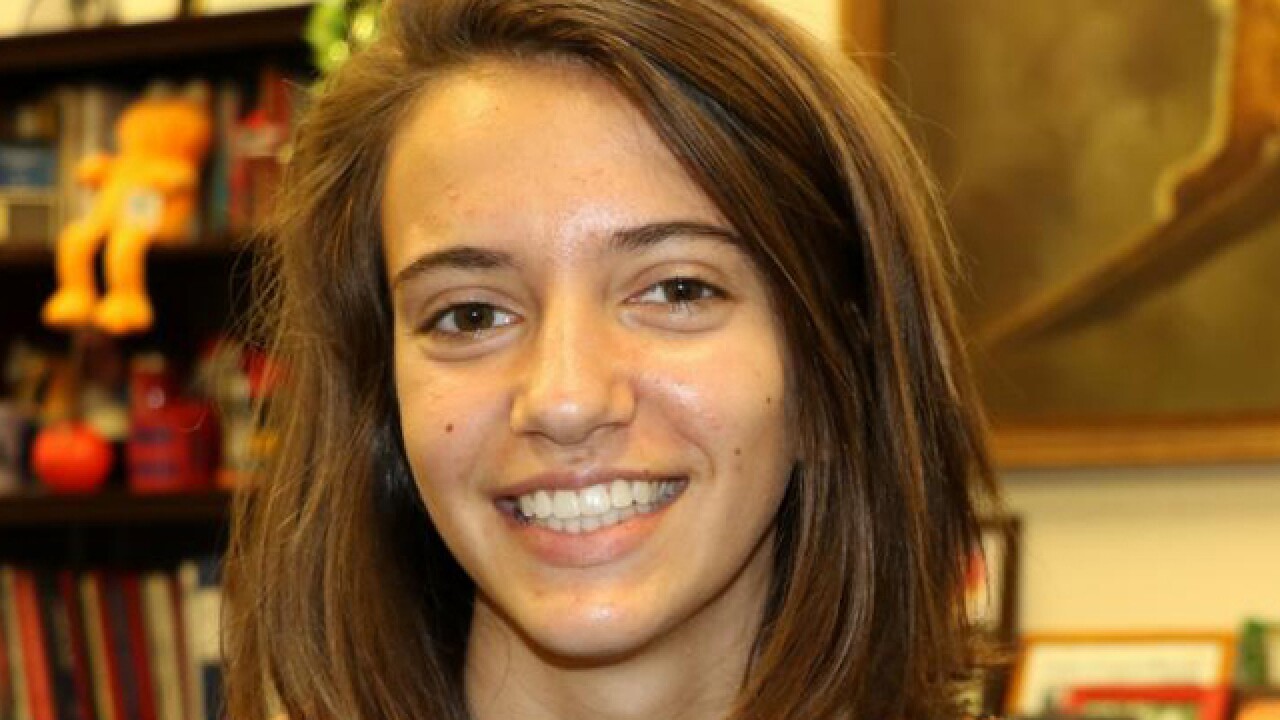 Copyright 2017 Scripps Media, Inc. All rights reserved. This material may not be published, broadcast, rewritten, or redistributed.
Contributed
<p>Conner High School junior Juliana Suprenant is one of 28 U.S. Senate pages.</p>

HEBRON, Ky. -- The 2017-18 school year will offer a unique learning opportunity for one Northern Kentucky teen.

Conner High School student Juliana Suprenant is starting her junior year as a federal employee in Washington, D.C. She is one of 28 students from across the country selected to participate in the U.S. Senate Page Program. She’ll serve under her sponsor, Sen. Mitch McConnell, through late January.

In Hitzfield's more than 30 years as an educator, Suprenant is the first student he’s known to serve as a page at the national level.

The roots of the Congressional Page Program go back to 1829, when 9-year-old Grafton Hanson was appointed as the first Senate page. Since then, pages have worked as messengers and assistants for congressional representatives.

Suprenant earns a salary for the work she does, out of which she must pay for her room and board. She shares a living space with other congressional pages and must abide by a curfew. She and her fellow pages also are prohibited from speaking to the media while in the program.

Suprenant first heard about the program in eighth grade from family friend and neighbor Lisa Wright.

“She was very excited about it,” Wright said.

Wright participated in the program in 1986 as a page for the U.S. House of Representatives. The House program has since ended.

From the time she heard about the program, Suprenant knew she wanted to take part in it. She read up on the requirements and learned that participants must be high school juniors and at least 16 years old. Candidates also must hold at minimum a 3.0 GPA.

She spent the following two years working toward her goal. In addition to maintaining the necessary GPA, she’s worked to set herself apart as a leader and well-rounded individual. Among other activities, she participates in varsity track and cross country, the Boone County Youth Cabinet and National Honor Society.

“She worked hard to get what she wanted,” said Juliana’s mother, Cathy Suprenant.

Even Juliana’s attendance may have played a role in her selection. Going into freshman year, she set a goal to have perfect attendance through all four years of high school. Two years in, she hasn’t missed a day yet.

“It’s just been one of her personal goals,” Cathy Suprenant said.

That dependability is key in a situation where students are expected to balance school and work five days a week.

“You really have to have the commitment to do this,” Hitzfield said.

During her time in the nation’s capital, Juliana attends school weekdays from 6:15 to 9:45 a.m. She then works as a page from 10 a.m. until Senate adjourns -- usually around 4 p.m.

“They can work all day,” Cathy Suprenant said. “It just depends what’s going on that day with Congress.”

Page duties include preparing the chamber for Senate sessions, delivering correspondence and carrying bills and amendments to the desk on the Senate floor.The effort she put into getting into the program and continues to put in as a participant is not without reward. While she’s been veering away from previous career considerations in politics or law, the work and life experience she’s gaining has numerous applications.

One of the most significant of those lessons is learning to work with individuals of differing opinions.

Coming from a family of registered Democrats to work under a Republican senator, Juliana already possessed a fair share of that trait. Developing friendships with those she’s living and working with will help her further develop that respect.

“You see them as human beings … and you see how hard they work,” Wright said. “You don’t necessarily see that on TV. Whether you agree or not, you respect that.”

While developing respect, the program also helps students recognize how they can contribute to decisions that affect their country.

“To see history in the making before your eyes and in some small, tiny way to be a part of it, that … is exciting,” Wright said.

Juliana will return to Conner High School to complete her junior year when the program concludes in January.