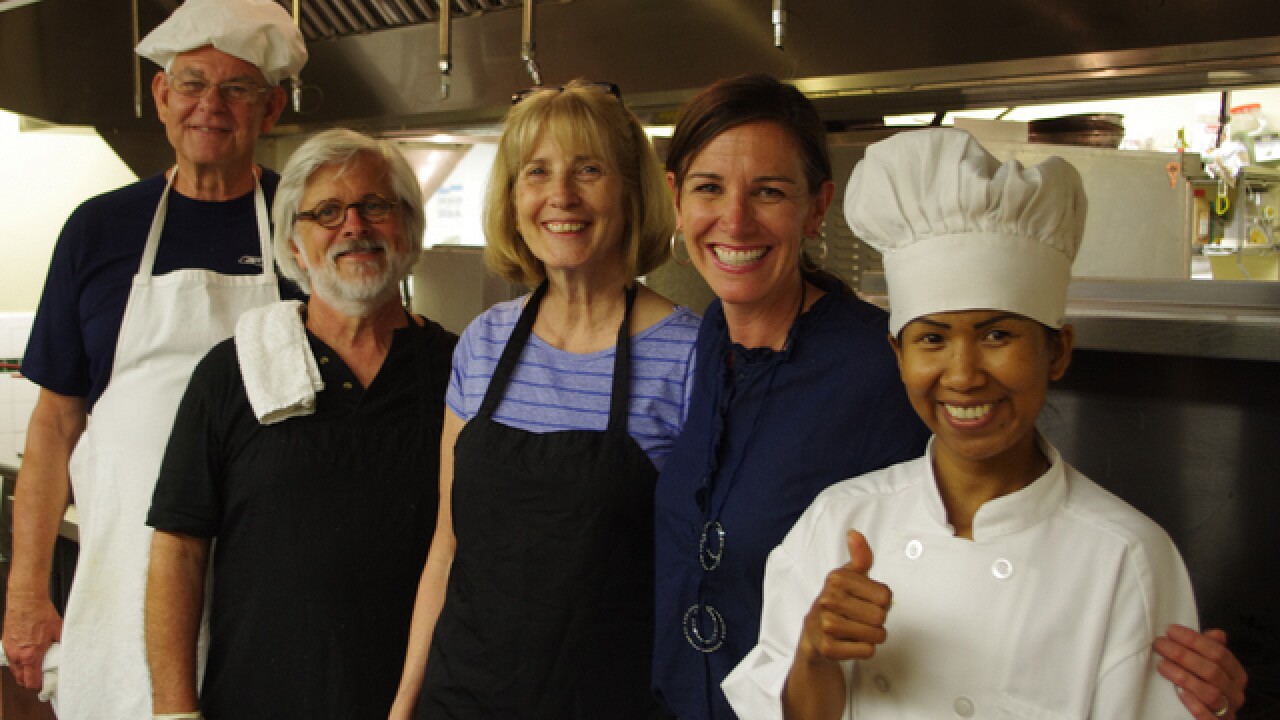 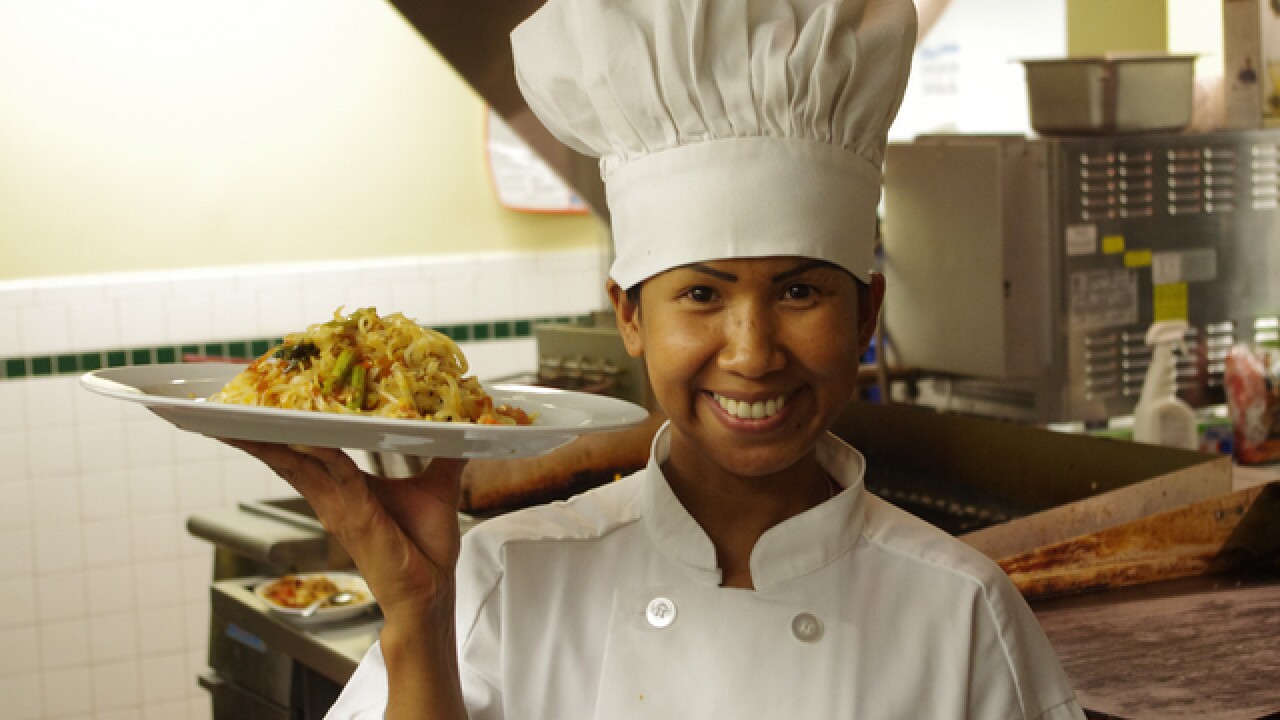 WYOMING, Ohio -- Two years ago, Ornuma "Ao" Evans found herself raising three kids alone in a country that was mostly foreign to her.

Her husband -- the owner of the now closed Cosmic Pizza in Hartwell -- had just been gunned down in front of her by a stranger.

Evans was unable to drive, had never used a phone and wasn't sure what her home address was. She was lost.

Then, a group of neighbors made it their mission to change that.

A community-driven online fundraiser to help Evans pay her bills generated more than $42,000. The community also helped her get a driver’s license, taught her how to pay those bills and even helped look after her kids.

And that's not the only thing a little help from some friends can do. With their support, Evans opened a weekly pop-up Thai restaurant this spring with flavors and dishes that are spicing up the neighborhood.

From Silent Stranger to Community Darling

Evans met her world-traveling Ohioan husband Rich in her native country of Thailand.

The two initially moved to California with their first child, but finally settled down in Cincinnati, where they opened Cosmic Pizza.

The restaurant advertised “true thin-crust pizza that’s out of this world” and featured some unusual Thai-inspired toppings. Cincinnati Magazine named their pizza among the city’s best in 2011.

“We tried a lot of food over there and we picked the ones we liked,” Evans said.

Even as the restaurant grew in success, Evans' family mostly kept to themselves. Rich had fallen out of touch with his family, and Evans didn't speak much English.

“People ask me, ‘Are you crazy? You stayed here and never talked to any people,’” Evans said. But she didn’t talk to a lot of people when she lived in Thailand, either, she said.

Their secluded ways came to an end June 15, 2013, when a man entered Cosmic Pizza and shot and killed Rich, 50, right in front of Evans and her children.

Police arrested John Deloney days later in Indianapolis and charged him with murder and attempted robbery.

Two years later, the case is still in courts, with Deloney disagreeing with his own attorneys about whether or not he was mentally disabled.

“He took everything from me, and he’s still there,” Evans said.

While it was against her nature to be so social, Evans said she knew she needed the community's help.

“I have a lot of things to learn,” Evans said. “Nobody understands me when I speak. I never talked to any people.”

Yet, that didn’t stop people from talking to her and offering their help. As a way of saying thanks, Evans started cooking Thai food for her new friends.

“We all thought it was fantastic,” Margot Madison, one of Evans’ friends, said.

The food was so good, it gave the friends an idea. Evans had started cleaning houses to make money, but she was limited in the hours she could work because she couldn’t afford a babysitter.

Why not sell the food they were all enjoying so much?

A Dash of Help, A Whole Lot of Delicious

The plan for a pop-up eatery, now known as Little Thai Cosmic, came together in April when Evans and her friends met up with Dino DiStasi of DiStasi Banquet Center in Wyoming.

DiStasi’s kitchen was available on Tuesdays, when there typically wasn’t much going on.

“We thought she could really do some good volume,” DiStasi said.

Evans offers two different dishes each week at Little Thai Cosmic. So far, the menus have included lemongrass chicken, black pepper beef, sweet and sour pork and fried noodles with shrimp, among others.

The dishes are posted online each week at littlethaicosmic.com.

The recipes are based on the cuisine from a small island near Ko Samui in southeastern Thailand, so they’re prepared a little differently than the dishes from most Thai restaurants.

All of Evans’ dishes, even the sauce and spices, are made from scratch, and she demonstrates the quality by comparing her heavy sauce to a watery store-bought sauce.

Customers who picked up orders one Tuesday night spoke enthusiastically about the food. Even though Thai Tuesday has only been going for a few weeks, there were already repeat customers who called the food “fantastic.”

Evans had never cooked for so many people at once when she was the chef at Cosmic Pizza.

That’s where her new friends come in.

Every Monday, volunteer Bill Randolph takes Evans to go shopping. They and other friends then do some kitchen prep work.

Orders come in via email and by phone. The group starts cooking by Tuesday afternoon. Randolph’s wife, Linda, watches Evans’ kids. Others help distribute the meals to Evans’ customers as they come to pick up their orders.

“We’re trying to get her on the basis that she can support herself and her kids,” Randolph said. “The whole community has been pretty helpful.”

Thai Tuesdays at DiStasi’s have been fairly popular so far. Randolph said they were serving about 100 meals each week and sold 150 on their busiest night so far.

“It really gives her a lot of confidence,” Madison said.

Evans said she doesn’t have any plans to expand beyond Tuesdays.

While she needs to pay the bills and said it’s important to be able to do it on her own, she also needs to be there for her kids.

“My children are still young,” she said. “I need to work here and I can make money for them.”